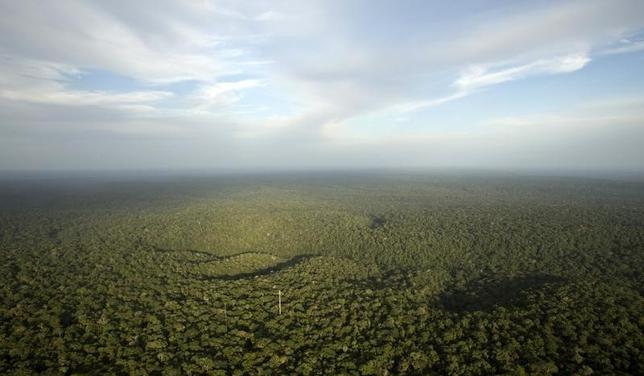 A view is seen from the Amazon Tall Tower Observatory (ATTO) in Sao Sebastiao do Uatuma in the middle of the Amazon forest in Amazonas state January 10, 2015. Reuters/Bruno Kelly
LONDON (Thomson Reuters Foundation) - Satellite images suggest tropical forests from the Amazon to the Philippines are disappearing at a far more rapid pace than previously thought, a University of Maryland team of forest researchers say...

The annual rate of deforestation from 1990 to 2010 was 62 percent higher than in the previous decade, and higher than previous estimates, according to a study carried out of satellite maps covering 80 percent of the world’s tropical forests.

The new study questions the United Nations Food and Agriculture Organization's (FAO) assessment, which suggested that the rate of deforestation actually decreased 25 percent from 1990 to 2010.

Until now, "the Forest Resource Assessment (FRA) report of the United Nation's FAO was the only one available source to estimate long term forest change and its trends," said Do-Hyung Kim, lead author of the study that is expected to be published in Geophysical Research Letters.

"However, the FAO report has been criticized for inconsistency in its survey methods and the definition of what is a forest. Our result is important in that we are providing a satellite-based alternative for the FRA," he said.

The FAO assessment has been based in large part on self reporting from tropical forest countries, Kim said. In contrast, Kim and his University of Maryland colleagues analyzed 5,444 Landsat images from 1990, 2000, 2005 and 2010 to assess how much forest was lost or gained 34 countries, which account for about 80 percent of tropical forest land in the world.

During the 1990 to 2000 time period, the annual net forest loss across all the countries was 4 million hectares (about 15,000 square miles or 40,000 square kilometers) per year, according to the study.

Tropical Asia showed the second largest increase in deforestation with 0.8 million hectares (about 3,100 square miles or 8,000 square kilometers) lost per year, led by countries including Indonesia, Malaysia, Cambodia, Thailand and the Philippines.

Tropical Africa showed the least amount of annual net forest area loss, but still saw a steady increase due to cutting primarily in the Democratic Republic of Congo and Madagascar.

The U.N.’s Forest Resource Assessment reported during the same time period that there was a 25 percent decrease in deforestation in tropical forest countries.

However, Rodney Keenan, a University of Melbourne forest science researcher who participated in the FAO’s last forest assessment, said the agency’s report might not be as flawed as it seems.

“The Kim study uses automated remotely sensed imagery only,” he said. “This gives a picture of one aspect of forest change, while ground estimates and management information give other perspectives,” such as whether land without trees is set to be reforested.

“Most experts consider that relying on remote sensing alone, as these authors have done, is of limited value in understanding forest dynamics and management,” he said.

Keenan agreed that both approaches could be considered “complementary” and the new study presents “interesting new data”.

However, Kim said the Forest Resource Assessment missed deforestation that is obvious in satellite images. For example, the FRA reported no change of deforestation rates in 16 of 34 countries looked at in both studies, including Colombia and the Democratic Republic of the Congo.

The new study, however, found increasing deforestation in those countries, he said.

Drivers of increased deforestation include an increase in urban population, logging and growth of agriculture, according to research from NASA.

Deforestation contributes about 10 percent of human-induced greenhouse gas emissions that drive global warming, studies suggest, which has led to a range of efforts to reduce the problem.

The UN-led Reducing Emissions from Deforestation and Forest Degradation (REDD) effort, for instance, helps channel money from richer nations to poorer tropical forest ones in exchange for efforts to protect tropical forests.

Satellite imaging is one way to hold countries more accountable for their deforestation, Kim said. He noted that “as deforestation accelerates, we can project climate change will also accelerate.”

Keenan said better understanding where and why deforestation happens can help “explore the opportunities to reduce (forest) conversion.”

“Reducing deforestation, increasing forest area and sustainably managing our forests can be an important contribution to action on climate change,” he said.

The FAO is set to issue an updated forest assessment in September at the World Forestry Congress.