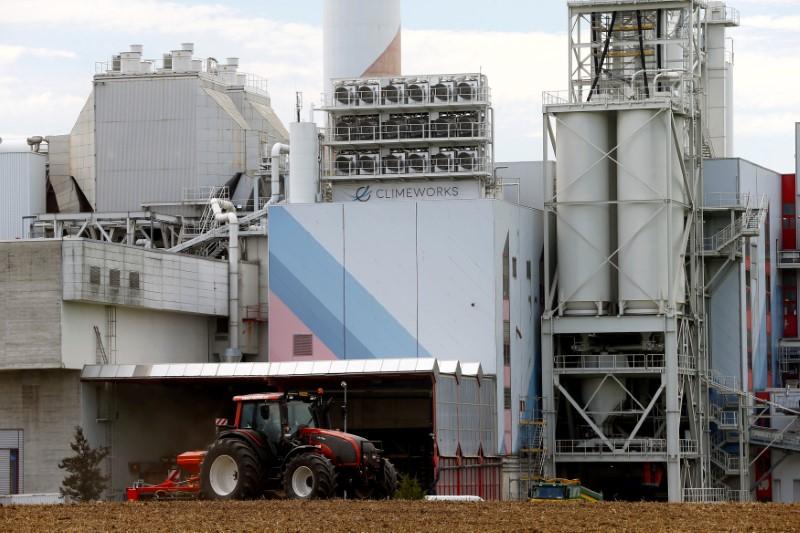 A facility for capturing CO2 from air of Swiss Climeworks AG is placed on the roof of a waste incinerating plant in Hinwil, Switzerland July 18, 2017.Arnd Wiegmann
OSLO (Reuters) - Scientists are sucking carbon dioxide from the air with giant fans and preparing to release chemicals from a balloon to dim the sun's rays as part of a climate engineering push to cool the planet...

The United Nations says the targets are way off track and will not be met simply by reducing emissions for example from factories or cars - particularly after U.S. President Donald Trump's decision to pull out of the 2015 pact.

They are pushing for other ways to keep temperatures down.

In the countryside near Zurich, Swiss company Climeworks began to suck greenhouse gases from thin air in May with giant fans and filters in a $23 million project that it calls the world's first "commercial carbon dioxide capture plant".

Worldwide, "direct air capture" research by a handful of companies such as Climeworks has gained tens of millions of dollars in recent years from sources including governments, Microsoft founder Bill Gates and the European Space Agency.

If buried underground, vast amounts of greenhouse gases extracted from the air would help reduce global temperatures, a radical step beyond cuts in emissions that are the main focus of the Paris Agreement.

Climeworks reckons it now costs about $600 to extract a tonne of carbon dioxide from the air and the plant's full capacity due by the end of 2017 is only 900 tonnes a year. That's equivalent to the annual emissions of only 45 Americans.

And Climeworks sells the gas, at a loss, to nearby greenhouses as a fertilizer to grow tomatoes and cucumbers and has a partnership with carmaker Audi, which hopes to use carbon in greener fuels.

Jan Wurzbacher, director and founder of Climeworks, says the company has planet-altering ambitions by cutting costs to about $100 a tonne and capturing one percent of global man-made carbon emissions a year by 2025.

"Since the Paris Agreement, the business substantially changed," he said, with a shift in investor and shareholder interest away from industrial uses of carbon to curbing climate change.

But penalties for factories, power plants and cars to emit carbon dioxide into the atmosphere are low or non-existent. It costs 5 euros ($5.82) a tonne in the European Union.

And isolating carbon dioxide is complex because the gas makes up just 0.04 percent of the air. Pure carbon dioxide delivered by trucks, for use in greenhouses or to make drinks fizzy, costs up to about $300 a tonne in Switzerland.

Other companies involved in direct air capture include Carbon Engineering in Canada, Global Thermostat in the United States and Skytree in the Netherlands, a spinoff of the European Space Agency originally set up to find ways to filter out carbon dioxide breathed out by astronauts in spacecrafts.

The Paris Agreement seeks to limit a rise in world temperatures this century to less than 2 degrees Celsius (3.6 Fahrenheit), ideally 1.5C (2.7F) above pre-industrial times.

But U.N. data show that current plans for cuts in emissions will be insufficient, especially without the United States, and that the world will have to switch to net "negative emissions" this century by extracting carbon from nature.

Riskier "geo-engineering" solutions could be a backstop, such as dimming the world's sunshine, dumping iron into the oceans to soak up carbon, or trying to create clouds.

Among new university research, a Harvard geo-engineering project into dimming sunlight to cool the planet set up in 2016 has raised $7.5 million from private donors. It plans a first outdoor experiment in 2018 above Arizona.

"If you want to be confident to get to 1.5 degrees you need to have solar geo-engineering," said David Keith, of Harvard.

A facility for capturing CO2 from air of Swiss Climeworks AG is placed on the roof of a waste incinerating plant in Hinwil, Switzerland July 18, 2017.Arnd Wiegmann

Keith's team aims to release about 1 kilo (2.2 lbs) of sun dimming material, perhaps calcium carbonate, from a high-altitude balloon above Arizona next year in a tiny experiment to see how it affects the microphysics of the stratosphere.

"I don't think it's science fiction ... to me it's normal atmospheric science," he said.

Some research has suggested that geo-engineering with sun-dimming chemicals, for instance, could affect global weather patterns and disrupt vital Monsoons.

And many experts fear that pinning hopes on any technology to fix climate change is a distraction from cuts in emissions blamed for heating the planet.

"Relying on big future deployments of carbon removal technologies is like eating lots of dessert today, with great hopes for liposuction tomorrow," Christopher Field, a Stanford University professor of climate change, wrote in May.

Jim Thomas of ETC Group in Canada, which opposes climate engineering, said direct air capture could create "the illusion of a fix that can be used cynically or naively to entertain policy ideas such as 'overshoot'" of the Paris goals.

"We're in trouble," said Janos Pasztor, head of the new Carnegie Climate Geoengineering Governance Project. "The question is not whether or not there will be an overshoot but by how many degrees and for how many decades."

Faced with hard choices, many experts say that extracting carbon from the atmosphere is among the less risky options. Leaders of major economies, except Trump, said at a summit in Germany this month that the Paris accord was "irreversible."

By contrast, he said "carbon dioxide removal is challenging technologically, but deserves investment and trial."

The most natural way to extract carbon from the air is to plant forests that absorb the gas as they grow, but that would divert vast tracts of land from farming. Another option is to build power plants that burn wood and bury the carbon dioxide released.

Carbon Engineering, set up in 2009 with support from Gates and Murray Edwards, chairman of oil and gas group Canadian Natural Resources Ltd, has raised about $40 million and extracts about a tonne of carbon dioxide a day with turbines and filters.

But he added that "the Paris Agreement helps" with longer-term options of sucking large amounts from the air.

Among other possible geo-engineering techniques are to create clouds that reflect sunlight back into space, perhaps by using a mist of sea spray.

That might be used locally, for instance, to protect the Great Barrier Reef in Australia, said Kelly Wanser, principal director of the U.S.-based Marine Cloud Brightening Project.

Among new ideas, Wurzbacher at Climeworks is sounding out investors on what he says is the first offer to capture and bury 50 tonnes of carbon dioxide from the air, for $500 a tonne.

That might appeal to a company wanting to be on forefront of a new green technology, he said, even though it makes no apparent economic sense.