SCIENTISTS HAVE BEATEN DOWN THE BEST CLIMATE DENIAL ARGUMENT... 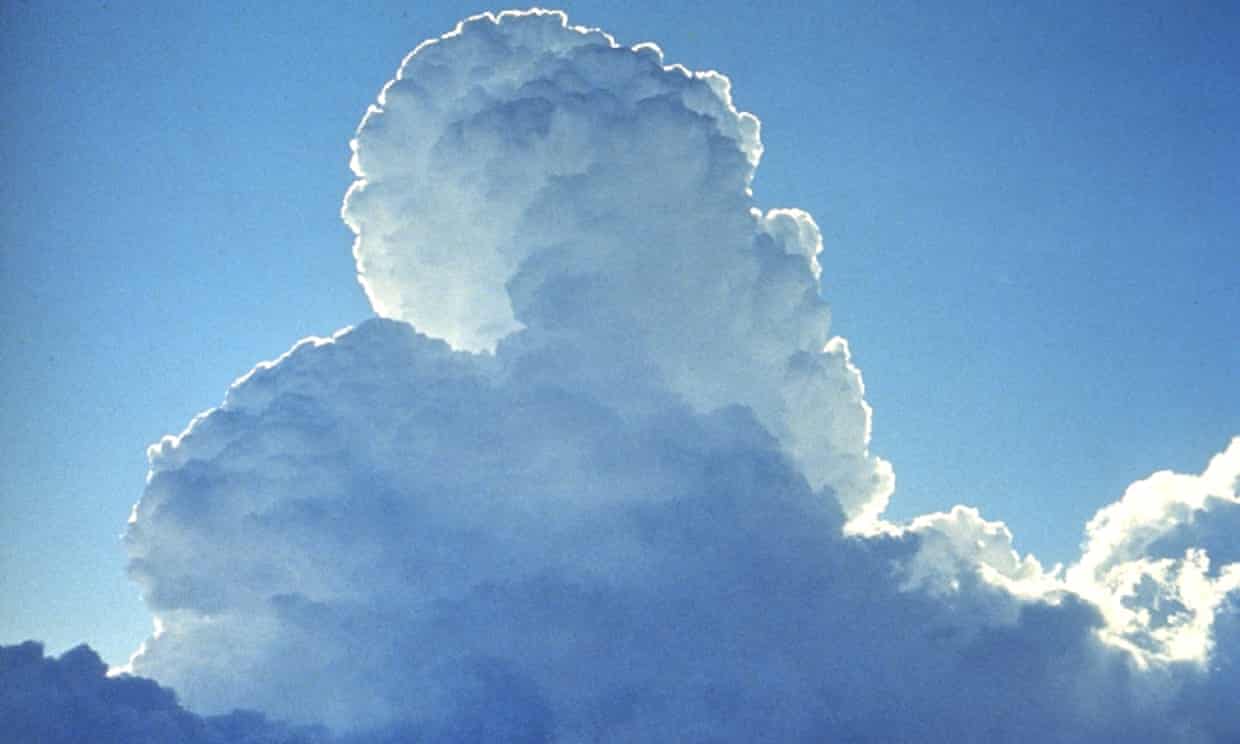 Clouds don’t act as a climate thermostat, and they’re not going to save us from global warming...

Climate deniers have come up with a lot of arguments about why we shouldn’t worry about global warming – about 200 of them – but most are quite poor, contradictory, and easily debunked by consulting the peer-reviewed scientific literature. The cleverest climate contrarians settle on the least implausible argument – that equilibrium climate sensitivity (ECS – how much a doubling of the amount of carbon dioxide in the atmosphere will increase Earth’s surface temperature) is low, meaning that the planet will warm relatively slowly in response to human carbon pollution.

But they have to explain how that can be the case, because there are a lot of factors that amplify global warming. For example, a warmer atmosphere holds more water vapor, which is itself a greenhouse gas, adding further warming. Warming also melts ice, leaving Earth’s surface less reflective, absorbing more sunlight. There are a number of these amplifying ‘feedbacks,’ but few that would act to significantly slow global warming.

Clouds are one possible exception, because they both act to amplify global warming (being made of water vapor) and dampen it (being white and reflective). Which effect wins out depends on the type of cloud, and so whether clouds act to accelerate or slow global warming depends on exactly how the formation of different types of clouds changes in a hotter world. That’s hard to predict, so many contrarians have wishfully argued that clouds will essentially act as a thermostat to control global warming.

A new study published in Nature by Stanford scientists Patrick Brown and Ken Caldeira found that so far, the global climate models that best simulate the Earth’s global energy imbalance tend to predict the most future global warming. These results suggest the ECS is around 3.7°C. This is higher than the previous best estimate of 3.1°C, and if correct, would shrink our carbon budget by about 15%. 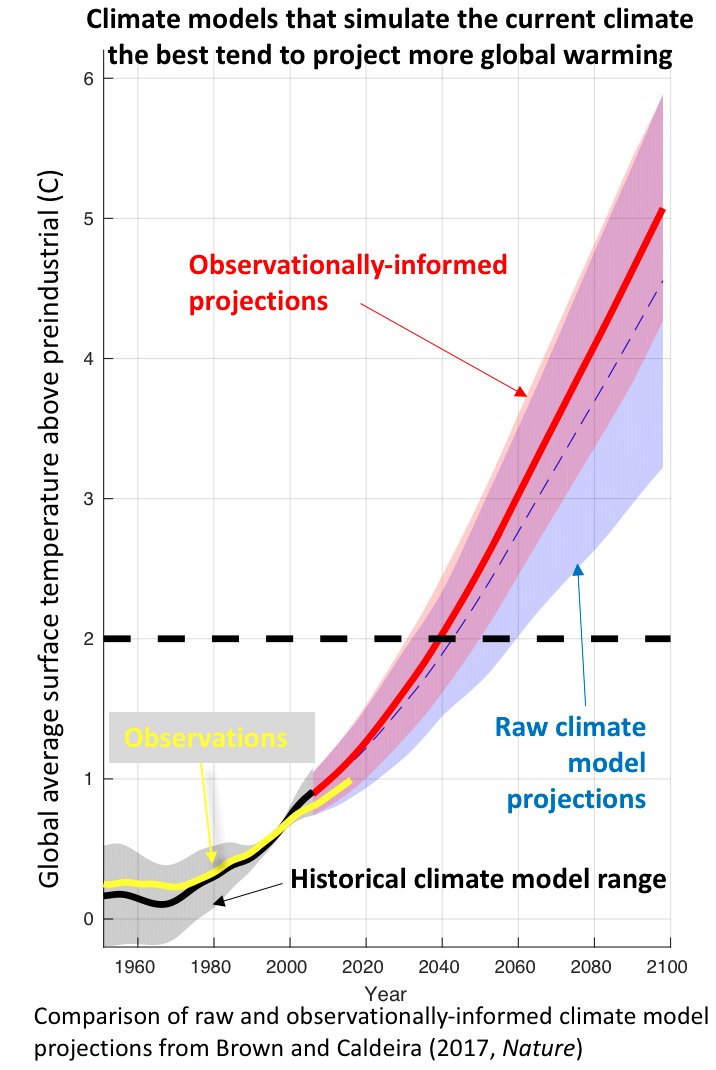 The study found that the biggest contributor to the difference between the accurate and inaccurate models was in how well they simulated cloud changes. And while it’s just one study, several prior papers arrived at similar conclusions.

For example, a 2010 study published in the Journal of Climate found that climate models that most accurately simulate recent cloud cover changes in the east Pacific point to an amplifying effect on global warming and thus a more sensitive climate. Another 2010 study by Andrew Dessler using satellite observations showed that in the short-term, clouds likely amplify global warming, though the long-term effect may be different.

In 2012, a paper published in Science by John Fasullo and Kevin Trenberth of the National Center for Atmospheric Research found that similar to the new Nature study, climate models that most accurately simulated observed cloud changes are also the ones that are most sensitive to the increased greenhouse effect.

Similarly, a 2014 paper published in Nature found that the least sensitive climate models incorrectly simulate water vapor being drawn up into the atmosphere to form clouds in a warmer world. In reality, as lead author Steve Sherwood explains in the video below, scientists observe water vapor being pulled away from those higher cloud-forming levels of the atmosphere.

Former MIT scientist Richard Lindzen (one of the most often cited, and most often wrong contrarian climate scientists) was among the first to argue that clouds act as a climate thermostat. He developed a hypothesis in 2001 that as the atmosphere warms, the area covered by cirrus clouds will contract like the iris of an eye to allow more heat to escape into space, thus slowing global warming. His ‘iris hypothesis’ was quickly disproved by subsequent research, but that hasn’t stopped climate contrarians from continuing to make the argument.

More recently, other contrarian scientists have used a combination of climate models and recent observational data to similarly argue that Earth’s climate is relatively insensitive to the increased greenhouse effect (they call these “observational estimates” of ECS). This group often likes to refer to themselves as ‘lukewarmers,’ but really they just cherrypick this one way to estimate ECS because it seemed to yield a relatively low result, while ignoring the other methods that point toward a significantly more sensitive climate.

Over the past two years, climate scientists have identified several flaws in the method that yielded lower estimates of ECS. At this year’s American Geophysical Union conference – the largest gathering of climate and Earth scientists every December – there was a session devoted to this very topic. As one of the presenting climate scientists Andrew Dessler put it:

This leads to one of the biggest “skeptical” talking points: “Observational estimates of ECS are much lower than models” or “Models are too sensitive to CO2”. In the session today, it’s clear that the scientific community has beaten the shit out of this problem. 2/

The issue is that, in addition to forced warming, there’s also random variability of the climate system and that can interfere with the ability to infer things about the forced warming, like ECS. This builds on research by Chen Zhou, @tim_andrewsUK, and Jonathan Gregory. 4/

In a year or so, “Observational estimates of ECS are much lower than models” will be sitting next to “global warming stopped in 1998” or “the surface temperature record can’t be trusted” in the junk yard of discredited skeptical ideas. 5/

There’s still significant uncertainty about how clouds will respond to global warming, but the evidence points to an amplifying effect, or at least not a significant dampening. The new Nature study adds to the mountain of evidence ruling out the contrarian argument for an insensitive climate. Clouds aren’t going to save us; only rapid cuts in carbon pollution can do that.