SCIENTISTS WARN OF PERILOUS CLIMATE SHIFT WITHIN DECADES, NOT CENTURIES... 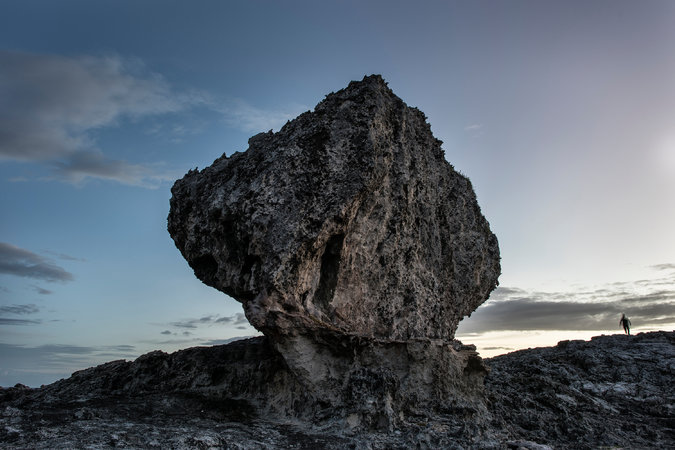 A massive boulder on a coastal ridge in North Eleuthera, the Bahamas. A new research paper claims it was most likely moved there by powerful storms during the last warm period of Earth history, 120,000 years ago, and warns that such stormy conditions could recur because of human emissions of greenhouse gases. Credit Charles Ommanney/The Washington Post, via Getty Images

The nations of the world agreed years ago to try to limit global warming to a level they hoped would prove somewhat tolerable. But leading climate scientists warned on Tuesday that permitting a warming of that magnitude would actually be quite dangerous.

The likely consequences would include killer storms stronger than any in modern times, the disintegration of large parts of the polar ice sheets and a rise of the sea sufficient to begin drowning the world’s coastal cities before the end of this century, the scientists declared.

“We’re in danger of handing young people a situation that’s out of their control,” said James E. Hansen, the retired NASA climate scientist who led the new research. The findings were released Tuesday morning by a European science journal, Atmospheric Chemistry and Physics.

A draft version of the paper was released last year, and it provoked a roiling debate among climate scientists. The main conclusions have not changed, and that debate seems likely to be replayed in the coming weeks.

The basic claim of the paper is that by burning fossil fuels at a prodigious pace and pouring heat-trapping gases into the atmosphere, humanity is about to provoke an abrupt climate shift.

Specifically, the authors believe that fresh water pouring into the oceans from melting land ice will set off a feedback loop that will cause parts of the great ice sheets in Greenland and Antarctica to disintegrate rapidly.

That claim has intrigued some experts who say the paper may help explain puzzling episodes in Earth’s past when geological evidence suggests the climate underwent drastic shifts. Yet many other scientists are unconvinced by some of the specific assertions the authors are making.

“Some of the claims in this paper are indeed extraordinary,” said Michael E. Mann, a climate scientist at Pennsylvania State University. “They conflict with the mainstream understanding of climate change to the point where the standard of proof is quite high.”

Despite any reservations they might have about the new paper, virtually all climate scientists agree with Dr. Hansen’s group that society is not moving fast enough to reduce emissions of greenhouse gases, posing grave risks. An agreement reached late last year in Paris seeks to cut emissions, but it is not remotely ambitious enough to limit global warming to the degree Dr. Hansen regards as necessary.

Among Dr. Hansen’s colleagues, some of the discomfiture about the new paper stems from his dual roles as a publishing climate scientist and, in recent years, as a political activist. He has been arrested at rallies, and he has joined with a group of young people who sued the federal government over what they said was its failure to limit global warming.

Dr. Hansen argues that society is in such grave peril that he feels morally compelled to go beyond the normal role played by a scientist and to sound a clear warning.

That stance has made him a hero to college students fighting climate change, but some fellow scientists fear he has opened himself to the charge that he is skewing his scientific research for political purposes.

In 2009, nations agreed to try to limit the planetary warming to 3.6 degrees Fahrenheit, or 2 degrees Celsius, above the preindustrial level. The Earth has already warmed by about half that amount. The climate appears to be destabilizing, virtually all land ice on the planet has started to melt, and the oceans are rising at an accelerating pace.

The paper, written by Dr. Hansen and 18 other authors, dwells on the last time Earth warmed naturally, about 120,000 years ago, when the temperature reached a level estimated to have been only slightly higher than today. Large chunks of the polar ice disintegrated then, and scientists have established that the sea level rose 20 to 30 feet.

Climate scientists agree that humanity is about to cause an equal or greater rise in sea level, but they have tended to assume that such a large increase would take centuries, at least. The new paper argues that it could happen far more rapidly, with the worst case being several feet of sea-level rise over the next 50 years, followed by increases so precipitous that they would force humanity to beat a hasty retreat from the coasts.

“That would mean loss of all coastal cities, most of the world’s large cities and all their history,” Dr. Hansen said in a video statement that accompanied the new paper.

The paper identifies a specific mechanism that the scientists say they believe could help cause such an abrupt climate shift.

Their idea is that the initial melting of the great ice sheets will put a cap of relatively fresh water on the ocean surfaces near Antarctica and Greenland. That, they think, will slow or even shut down the system of ocean currents that redistributes heat around the planet and allows some of it to escape into space. Warmth will then accumulate in the deeper parts of the ocean, the scientists think, speeding the melting of parts of the ice sheets that sit below sea level.

In addition, a wider temperature difference between the tropics and the poles will encourage powerful storms, the researchers contend. The paper cites evidence, much of it contested, that immense storms happened during the warm period 120,000 years ago.

For instance, the paper says such storms might have thrown giant boulders onto coastal ridges in the Bahamas, though other experts think a tsunami might have been responsible.

The idea of a shutdown in the ocean circulation because of global warming was considered more than a decade ago, and while scientists concluded that a weakening of the currents was possible, they said a complete shutdown was unlikely to happen in this century.

That did not stop a distorted version of the idea from becoming the premise of the disaster movie “The Day After Tomorrow,” released in 2004.

The new paper may reopen that debate, requiring scientists to re-examine the idea with the more sophisticated computer models of the climate that are available today. It could take several years for the experts to come to a consensus, though.

Dr. Hansen spent decades heading NASA’s climate research unit in Manhattan, before retiring in 2013. He now heads a center created for him at Columbia University.

He gained fame in 1988 when he warned Congress that global warming had already begun. He was ahead of the scientific consensus at the time, but it became clear in retrospect that Earth had been in the midst of a period of rapid global warming at the time he testified.

Even scientists wary of the specific claims in the new paper point to Dr. Hansen’s history to argue that his ideas need to be taken seriously.

“I think we ignore James Hansen at our peril,” Dr. Mann said.