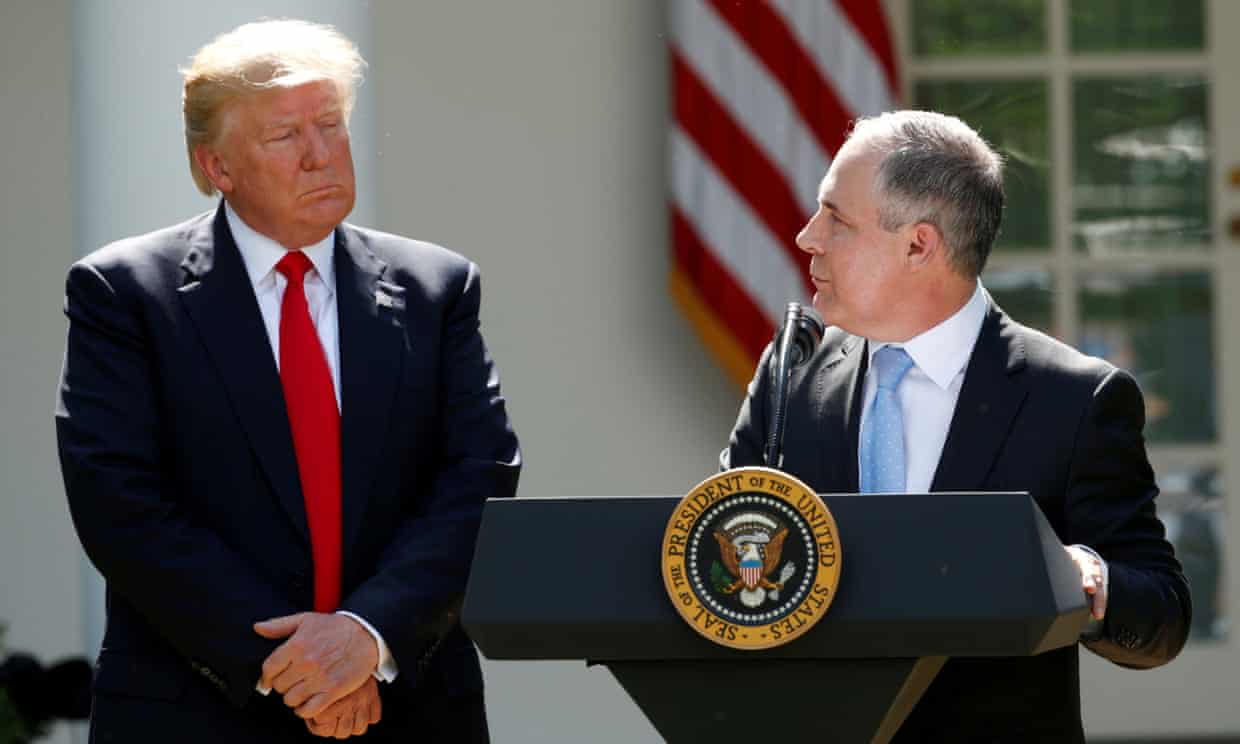 Donald Trump listens to EPA Administrator Scott Pruitt after announcing his decision that the United States will withdraw from the Paris Climate Agreement, in the Rose Garden of the White House in Washington, U.S., June 1, 2017. Photograph: Kevin Lamarque/Reuters

In short, from a practical standpoint, as little additional warming as possible...

"The climate is changing. That’s not the debate. The debate is how do we know what the ideal surface temperature is in 2100?"

Pruitt’s goal is to sow doubt on behalf of his oil industry allies in order to weaken and delay climate policies. Shifting the ‘debate’ toward ‘the ideal surface temperature’ achieves that goal by creating the perception that we don’t know what temperature we should aim for. It’s in line with his boss’ recent ignorant tweet suggesting that “Perhaps we could use a little bit of that good old Global Warming.”

I spoke with a number of climate scientists who agreed that to minimize the risks associated with rapid human-caused climate change, from a practical standpoint the ‘ideal temperature’ is as close to the current one as possible.

Stefan Rahmstorf, Head of Earth System Analysis at the Potsdam Institute for Climate Impact Research pointed out that we’re not concerned about specific temperatures; it’s rapid temperature changes that cause problems:

"Pruitt of course is trying to have a strawman debate, distracting from the fact that not a certain temperature as such is better or worse, but that a change from what we are adapted to is a problem, especially a very rapid change - in either direction, cooling or warming, this causes big disruption.

We should not stray too far away from what we and the currently existing ecosystems have evolved for. That is the optimum, simply because it is what we’re highly adapted to, and any major change is going to be very painful."

Civilization developed in a stable climate

Texas Tech’s Katharine Hayhoe agreed, noting that human civilization has developed in the relatively stable climate of the past 10,000 years.

"There is no one perfect temperature for the earth, but there is for us humans, and that’s the temperature we’ve had over the last few thousands of years when we built our civilization, agriculture, economy, and infrastructure. Global average temperature over the last few millennia has fluctuated by a few tenths of degrees; today, it’s risen by nearly 1°C and counting.
Why do we care? Because we are perfectly adapted to our current conditions. Two-thirds of the world’s largest cities are located within a metre of sea level. What happens when sea level rises a metre or more, as it’s likely to this century? We can’t pick up Shanghai or London or New York and move them. Most of our arable land is already carefully allocated and farmed.

What happens when we can no longer grow the crops we used to, as climate shifts and water becomes more scarce in many subtropical areas? We can’t just take over new land: someone else already owns it. What happens when our water resources diminish or even run out? We can’t take over someone else’s water rights without a war.
We care about a changing climate because it exacerbates the risks we face today, and threatens the resources we depend on for our future."

In fact, Hayhoe specifically answered this question in one of her ‘Global Weirding’ videos for PBS:

The Paris climate targets are appropriate

Michael Mann, Distinguished Professor of Atmospheric Science at Penn State also pointed out that we’re approaching some critical temperature thresholds. For example, his research has shown that at warmer temperatures, reproduction of malaria-transmitting parasites increases rapidly.

"There are some absolute temperature thresholds that are important when it comes to agriculture (particularly in tropics), coral bleaching, infectious disease, and heat stress (e.g. the tropics becoming essentially unlivable).

So while it’s difficult to say what the “ideal temperature” is, there clearly is a range of temperatures suitable for human civilization and there is a real danger that we’re pushing toward the upper limit of that range."

Naomi Oreskes, Professor of the History of Science and Affiliated Professor of Earth and Planetary Sciences at Harvard similarly noted that according to the peer-reviewed literature on climate change impacts, we’re already headed into dangerous territory:

"Of course, there is no ‘ideal’ temperature so we should not accept that framing. We have strong scientific evidence that anything above 2°C is likely to be deeply problematic. Even the roughly 1°C change we have already seen is having measurable, adverse effects."

That’s why with the Paris climate accords, every country in the world except the USA has agreed to try and limit global warming to no more than 2°C above pre-industrial temperatures, and preferably closer to 1.5°C. The targets would be even more aggressive if possible, but as Oreskes noted, we’ve already caused 1°C of global warming, and transitioning away from fossil fuels will take time. From a practical standpoint, 2°C is the best we can plausibly achieve.

When speaking with the scientific experts it quickly becomes clear that the ideal response to climate change involves a rapid transition away from fossil fuels. Global temperatures are already warming at a rate more than 20 times faster than Earth’s fastest natural climate changes. It’s that rapid rate of global warming that poses an existential threat. Species can only adapt so quickly. The longer we wait to slow that dangerously fast climate change, the worse the consequences will be.

Unfortunately, the Trump Administration is doing everything it can to delay and weaken efforts to cut carbon pollution. Pruitt isn’t interested in these scientific answers to his question; he’s interested in helping his fossil fuel industry benefactors. He’s one of Oreskes’ Merchants of Doubt, but his time in power will be as finite as Donald Trump’s.