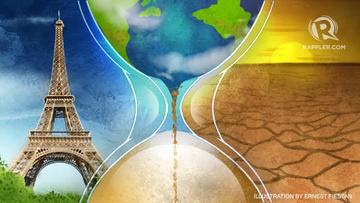 Because it worked so well to scuttle the global agreement to prevent Iran from getting a nuclear weapon (not), Republicans are trying the same techniques to undermine the Paris talks to combat climate change.

Remember back in March when a group of 47 Morons, led by the head idiot, Senator Tom Cotton, wrote an “open letter” to the leaders of Iran, informing them that Republican Senators were going to make common cause with Iranian hardliners in an attempt to block or undo any global agreement on limiting the Iranian nuclear program? Well, Republicans are at it again, once more attempting to undermine and interfere with the President’s Constitutional authority to negotiate agreements with foreign nations.

This time, they want to prevent a global agreement to combat global warming. Read more below.

Mitch McConnell’s office has been secretly contacting foreign officials and telling them Republicans will oppose and try to scuttle any agreement reached in Paris this year to limit greenhouse gas emissions.

A top policy aide to McConnell (R-Ky.) has had conversations with a select group of representatives from foreign embassies to make it clear that Republicans intend to fight Obama's climate agenda at every turn, sources familiar with the efforts say.

This traitorous and seditious effort to undermine the President’s authority didn’t work last time. In fact, it helped set up the President’s resounding victory in achieving a historic arms pact, by making it clear to all that the President wouldn’t have to make any concessions to Republicans – “wouldn’t have to,” because Republicans intended to oppose any agreement no matter what it contained. When one party in a negotiation makes it clear they don’t intend to negotiate at all, there is no reason to take them into account at all. They’re going to oppose anyway, no matter what provisions are present, so the President is free to get the best and most comprehensive agreement he can.

McConnell himself warned foreign leaders last spring to "proceed with caution before entering into a binding, unattainable deal” with Obama, noting that "two-thirds of the U.S. federal government" — Congress and the Supreme Court — hasn't signed off on the president's plans.

Of course, the courts and Congress don’t have any say in executive actions and executive agreements, so McConnell’s point is irrelevant – as has just been shown in the Iran agreement (formally known as the Joint Comprehensive Plan of Action, or JCPOA). Had Republicans not overplayed their hand on that one – had, instead, they worked to have input on JCPOA, and thus participated in shaping it, and so had an effect on its final form – perhaps McConnell’s threats would carry some weight this time. Instead, by mindlessly opposing it, with subterfuge and ridiculous hyperbole, Republicans have merely put their impotence and irrelevance on display for the world to see. The President can push for the most comprehensive and effective measures possible, confidant that he doesn’t have to consider Republican ideas, since Republicans don’t have any ideas to contribute.

This does raise the stakes in the 2016 election. Republican presidential candidates are falling over themselves in finding ways to make promises to withdraw from JCPOA on inauguration day – which means nothing more or less than re-imposing economic sanctions on Iran, since there is no other action the United States can take to interfere with the global enforcement and IAEA monitoring of the Iran agreement. In a similar way, Mitt Romney and all the runners-up in the 2012 Clown Car pledged to repeal Obamacare on “day one” if they seized the White House (how well did that turn out?), taking affordable health care away from tens of millions of Americans. The new crop will undoubtedly repeat those pledges in the coming months.

I fully expect Republican presidential candidates to threaten withdrawing from the upcoming Paris agreement by voiding any executive actions President Obama takes in support of the agreement. Republicans are okay with Americans dying or becoming impoverished because of inadequate or too-expensive health care. They’re okay with ensuring Iran is encouraged to develop nuclear weapons. Why shouldn’t they be okay with accelerating the pace of catastrophic global climate change?

This is one more reason Democrats must retain the White House. As if the threat of more conservative Supreme Court Justices isn’t enough, or the idea of Tea-Party-led tax policy and anti-worker laws and new national restrictions on voting and the near-elimination of women’s rights and LGBT rights isn’t enough, as if privatization of Social Security and the dismantling of Medicare and Medicaid isn't enough, with a Koch brothers sock puppet in the Oval Office and rightist extremists running Congress.

This should be a call to action for all Americans. Democrats must retain the White House, retake the Senate, and make substantial inroads in the House. The future of America, and of the world, depends on it.