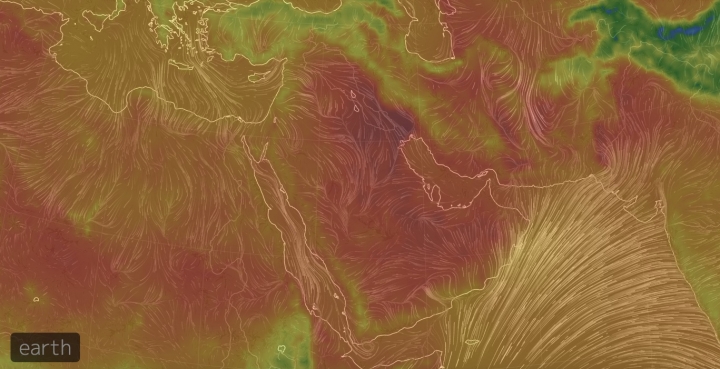 Temperatures across the Middle East in the midst of a heat wave on July 21, 2016. Credit: earth.nullschool.net

The Middle East is no stranger to scorching heat, but a recent heat wave sent temperatures soaring to heights that are rarely seen even there. On July 21, Mitribah, Kuwait, recorded a temperature of 129.2°F (54°C) during the height of the heat wave. If it checks out, that will be the second hottest temperature ever measured in the Eastern Hemisphere.

As the world continues to heat up due to the accumulation of greenhouse gases in the atmosphere, such record heat becomes more likely as heat waves become more frequent and more extreme, posing a risk to public health, particularly when combined with high humidity.

“Given the observed trend globally in breaking temperatures records more frequently in the last two decades, we can expect to see more record setting in the future in the region and elsewhere,” Omar Baddour, head of the World Meteorological Organization’s climate data and monitoring program, said in an email.

But earlier this month, temperatures soared even higher due to a meteorological phenomenon called a thermal low. This low pressure system is the result of the land heating up rapidly from the sun’s rays when compared to its surroundings.

The air above the surface heats up and, because it is less dense than the air around it, rises, creating an area of low pressure. (Unlike the low pressure systems that bring stormy weather, these systems have a weak circulation.)

Thermal lows can travel over large distances and can bring heat waves that cover a widespread area.

“The heat wave system associated with the thermal low covered much of the Middle East, Iran and southern Afghanistan,” Baddour said. “The dome of the heat wave was located in Kuwait, southern Iraq and northern Saudi Arabia. This explains the existence of the maximum values in Kuwait and Iraq.”

Topography also a plays a role, as higher elevations heat up faster than the air around them, and the highest temperatures were recorded in some of the area’s highlands.

Besides Kuwait, other extreme temperatures that were recorded during the heat wave included 129°F (53.9°C) in Basra, Iraq, on July 22, and 109°F and 116°F in southern Morocco, according to the WMO.

As greenhouse gases continue to build up in the atmosphere from human activities, the Earth’s average temperature continually rises. That means the baseline temperature that heat waves today occur against is higher, meaning it is easier to set record hot temperatures (and harder to hit record cold ones).

In the Middle East, “values near or equaling 50°C are beyond the norms, but they have become more frequent in the past years,” Baddour said.

These rising temperatures have a major impact on human health. When temperatures stay elevated at night, the body doesn’t get time to recover from the day’s highs. The threat becomes even more acute when humidity is also high, as the combination stresses the body’s natural coping mechanism by blocking the evaporation of sweat.

A study last October showed that the Middle East is a region of major concern for this combination in a hotter future. While it is typically associated with dry desert heat, cities in coastal areas of the region can experience sky-high humidity thanks to the exceptionally warm waters of the Persian Gulf. A heat wave last year combined with humidity sent the heat index in Bandar Mahshahr, Iran, to a mind-boggling 163°F (72.8°C).

The study found that in the future, heat waves capable of reaching the theoretical limit of what the human body can cope with will happen several times in the last decades of this century if greenhouse gas emissions aren’t curbed.

Before the temperature in Kuwait can take its place in the record books, it must be validated by the WMO officials responsible for making sure temperature measurements around the world are accurate.

“One of the key aspects of our WMO Archive of Weather & Climate Extremes is to make sure that the weather observations taken around the world are good enough to stand the strongest available examination,” Randall Cerveny, the WMO rapporteur on weather and climate extremes, said in an email.

Cerveny and his colleagues will be investigating whether the equipment that made the measurement was properly calibrated and sited, and that the operator was properly trained. 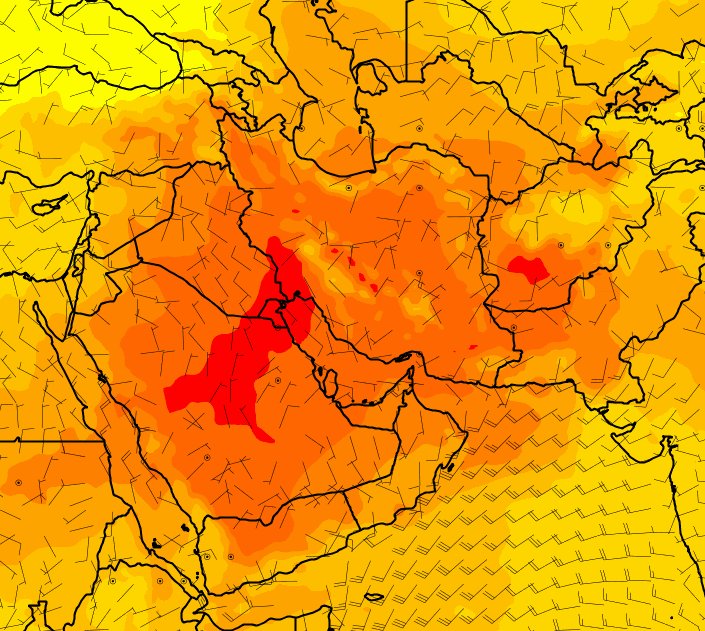 One factor they consider, whether the temperature jibes with those measured in the surround areas, seems to check out with this case.

If it is validated, a process that could take between six months and a year, it will be second only to the temperature of 131°F (55°C) measured in Kebili, Tunisia, on July 7, 1933.

Some meteorologists doubt the veracity of that measurement (along with the world record holder 134°F measured in Death Valley, Calif., in 1913), but clear evidence of error would have to be brought to the WMO to remove them from the top spots.

That is what happened to the former world record holder, a reported temperature of 136°F measured in Libya in 1922. During a two-year investigation (delayed by the revolution and civil war there), the WMO showed that the instrument that made that measurement was improperly sited and likely operated by an inexperienced person.

“The quality of our weather information is only as good as the quality of the equipment and personnel who are measuring it,” Cerveny said.