SEATTLE CALLS ON BILL GATES TO DIVEST FROM FOSSIL FUELS...

Microsoft founder Bill Gates is facing fresh calls to move his charity’s investments out of fossil fuels from the community in Seattle where it is based, led by the city’s former mayor.

The Bill and Melinda Gates’ Foundation is the world’s largest charitable foundation and funder of medical research. It had $1.4bn (£1bn) invested in fossil fuel companies, according to its latest available tax filings from 2013.

Speaking to the Guardian, former mayor Michael McGinn said that Gates could not simultaneously “hit the brake and the accelerator at the same time” in his approach to tackling climate change.

The campaign’s launch on Wednesday will include a demonstration outside the foundation’s visitor centre under a sign which reads “Every person deserves the chance to live a healthy, productive life”. The protesters’ banner reads: “Yes they do! Divest from fossil fuels now.” Campaigners plan to gather there every day until the foundation commits to shift its assets away from fossil fuel companies.

McGinn and the environmental NGO 350Seattle delivered a letter to the foundation’s headquarters in Seattle last week, endorsed by 24 organisations in the community, including the local branches of the Sierra Club and Audubon Society alongside other environmental, faith, student and parenting groups.

It reads: “We believe that a charitable foundation with the global reach of the Gates Foundation has a moral obligation to divest completely from fossil fuels....Given the size and prestige of the Gates Foundation, it is clear that your divestment will send a strong message to the world’s political leaders that it is socially and morally unacceptable to profit from industries that cause global warming and threaten the biodiversity and global security of the planet.”

Gates has rejected worldwide calls for divestment, arguing that it is futile. In June he committed to investing $2bn (£1.3bn) in renewable technologies in an interview with the Financial Times. He said it was part of his bid to “bend the curve” in the fight against climate change.

Commenting on Gates’ approach, McGinn added: “You can’t drive by hitting the brake and accelerator at the same time. We are at a point where we have to pick a pathway and the path of investing in renewables is one we have to fully commit to. But we can’t simultaneously commit to that path while continuing to facilitate the production of fossil fuels.”

The announcement from Gates followed the launch of a campaign by the Guardian in March calling upon the Gates Foundation and the Wellcome Trust – a huge funder of health research – to divest from fossil fuels. It has since been backed by more than 226,000 people worldwide. The Guardian has itself committed to remove its investments from fossil fuels.

When McGinn was mayor, he committed the city to divesting its operating funds, making it the first in the world to do so. Campaigners are still pushing the city to divest its pension funds. It was from Seattle that founder of 350.org Bill McKibben then launched the group’s fossil fuel divestment campaign in 2011, which has now helped to persuade more than 390 institutions worldwide to divest.

Commenting on the launch of 350Seattle’s campaign against the Gates’ Foundation, Bill McKibben said: “What a help it will be when the investments of this generous foundation align with its mission. Climate change is the great shadow across our planet’s future, and we must try to lift it with every tool we have.”

Seattle has been a focal point of opposition to the fossil fuel industry’s expansion, due to its proximity to proposed pipelines to transport tar sands oil from Canada and the expansion of local coal terminals. In June activists in kayaks formed a colourful blockade in Seattle’s port to hamper the departure of Shell’s rig en route to drill for oil in the Arctic. 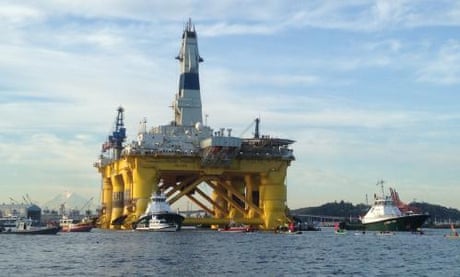 McGinn added: “There has always been leadership in Seattle around climate so I think having those voices speak to the Gates Foundation and asking them to join in that leadership is really significant. Seattle also has lots of people with an international perspective – we have a very significant immigrant and refugee populations here including a very significant East African population and as we know from world news the effects of drought and political instability have lead to waves of people fleeing these areas.”

Fossil fuel divestment campaigners were energised last week by a bill passed in California requiring the largest pension funds in the state – and in the US – to divest from coal.

The Gates’ Foundation told the Guardian that its trust, which is independently managed, does not comment on its holdings, strategies or investment decisions.