The first official trailer for An Inconvenient Sequel: Truth to Power was released on Tuesday. The timing of the clip's release comes at a crucial point for climate change discussion, with its release coming the same day Donald Trump signed an executive order to rescind Obama's Clean Power Plan and a host of other climate-related regulations. 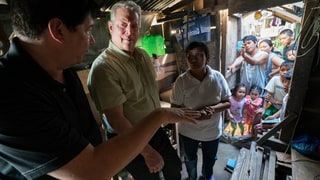 The trailer opens with a clip of Trump mocking climate change while on the campaign trail. "It's supposed to be 70 degrees today, it's freezing here. Speaking of global warming, where is – we need some global warming. It's freezing," he jokes.

The new clip reviews some of the progress made since Al Gore's Oscar-winning documentary, An Inconvenient Truth, came out in 2006. Gore recalls being criticized about a scene from the first film that showed "that the combination of sea level rise and storm surge would flood the 9/11 Memorial site and people said, 'What a terrible exaggeration.'" The next scene shows 2012's Hurricane Sandy causing exactly what was predicted.

Between footage of harrowing devastation caused by climate change are scenes of innovations and plans that have been created to prevent further damage, including the Paris Climate Deal, where virtually every nation "agreed to get to zero greenhouse emissions. It is unprecedented," Gore says. Climate change Experts say that Trump's rollback of Obama-era regulations will virtually assure the United States will fail to meet its obligations as laid out in the Paris agreement.

Though positive steps have been made, Gore says, "it's still not enough." Later in the clip, Trump is again seen from the campaign trail making promises to cancel "billions in climate change spending" and a plan to "end the EPA." The clip concludes with scenes of protests, a growing resistance and Gore's empowering speeches all leading to a call to action: "Fight like your world depends on it."

An Inconvenient Sequel: Truth to Power opens on July 28th.

Rolling Back Climate Regulations Is Trump's Most Dangerous Con Yet