SEPTEMBER IS THE MOST ENERGETIC MONTH FOR HURRICANES RECORDED IN THE ATLANTIC EVER...

The 2017 hurricane season has certainly been one for the record books. Whether it be Harvey’s scale-tipping rains, Irma’s off-the-chart winds, or the sheer number of storms that have spun up, this year is clearly anything but normal...

But how wacky has the weather in the tropics been? For that, meteorologists refer to a figure known as ACE, a measure of every hurricane’s energy put together during its life span. September produced the most ACE in any month on record in the Atlantic Ocean.

[Harvey. Irma. Maria. Why is this hurricane season so bad?]

ACE, or Accumulated Cyclone Energy, is manifest in stirred-up oceans, steamy downpours, crackling lightning and ferocious winds. The force to instigate these nasty conditions is extracted from the roasting waters of the tropical Atlantic and Caribbean, and transformed into motion through a hurricane’s natural “heat engine.”

To quantify this measure, scientists take into account the strength of the winds within each and every storm, as well as their duration. ACE is calculated every six hours, and a running tally is kept for each storm so long as it sticks around. The measure does not take into account a storm’s size.

In a given year, ACE across the Atlantic Basin stacks up to an average in the 90s. It’s not terribly unusual for ACE to rise into the triple digits, and the National Oceanic and Atmospheric Administration classifies any season that tops 111 as “above average.”

On Monday, Phil Klotzbach, a tropical weather research at Colorado State University, tweeted that ACE in the Atlantic had soared to 155.4 for the month of September so far, a new record for any month. It ousted September 2004 as the previous record holder. This September’s ACE is more than we would see in the entirety of what’s considered an extremely active season. 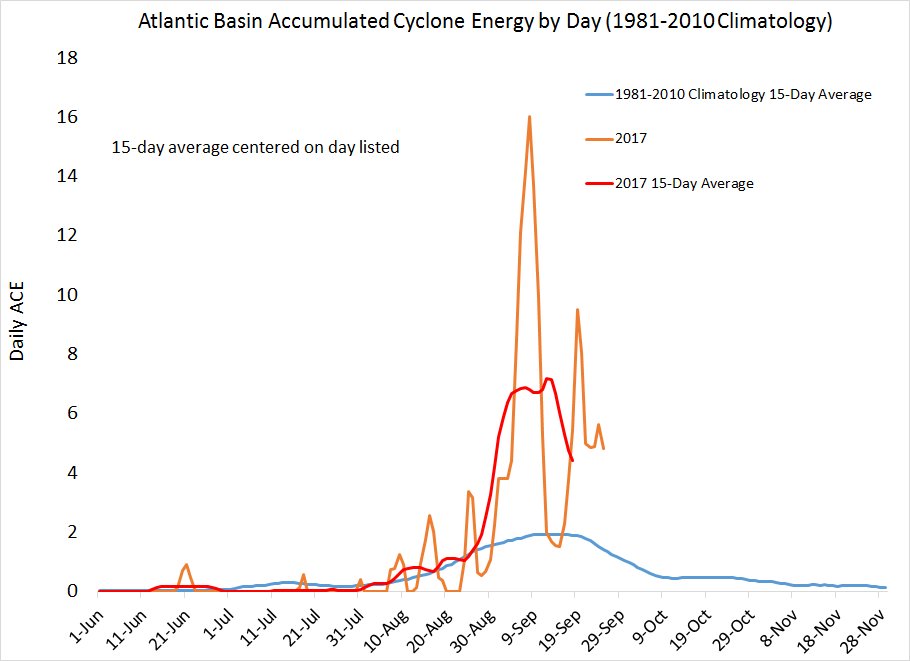 Plot of daily Atlantic ACE in 2017 compared with long-term average. September 2017 the most active Atlantic month on record for ACE.

Considering the entire season’s hurricane activity, 2017’s ACE already ranks in the top 10 most on record. Thus far, we’re up to the low 190s, with about two months left in hurricane season.

Even with the forecast drop-off of cyclone activity over the next few weeks, we still may approach record territory. 2005 boasted the most ACE of a given season, topping the charts at 250. ACE in the Pacific tends to be about 30 percent higher as a result of the size of the ocean and the greater number of storms that accordingly form.

Even the individual storms this season have been in the realm of records. Consider Irma: Its ACE totaled 66.6 over the hurricane’s 13-day lifetime. This is more than two-thirds the typical ACE of an entire season. Only one or two storms have ever drawn up more energy as reported by the ACE model — Category 5 Ivan in 2004 at 70.4, and possibly the San Ciriaco hurricane of 1899. The latter, known as the longest-lived Atlantic hurricane on record, spun at hurricane status for a whopping 23 days. That storm lay siege to Puerto Rico, Turks and Caicos, and the Bahamas, killing more than 3,000 people. That storm’s ACE has been estimated at 73.6.

Irma, Jose, and Maria each generated 40-plus ACE units, the first time on record three Atlantic storms have produced so much, Klotzbach tweeted.

Klotzbach also listed another important figure that can serve as an indicator of cyclone activity, known as “hurricane days.” This is a simple sum of the number of hurricanes in the Atlantic on a given day. If there were two hurricanes in the ocean on one day, that would count for two “hurricane days.” Between Lee, Maria, Jose, Katia and Irma, September 2017 has generated 35 hurricane days, a record. Klotzbach stated that September 1926 had held the top spot before at 34.5 but said this may be underestimated because of the lack of satellites in that era.

Sam Lillo, a meteorology PhD student at the University of Oklahoma, tweeted at least one hurricane has roamed Atlantic waters every day this month. 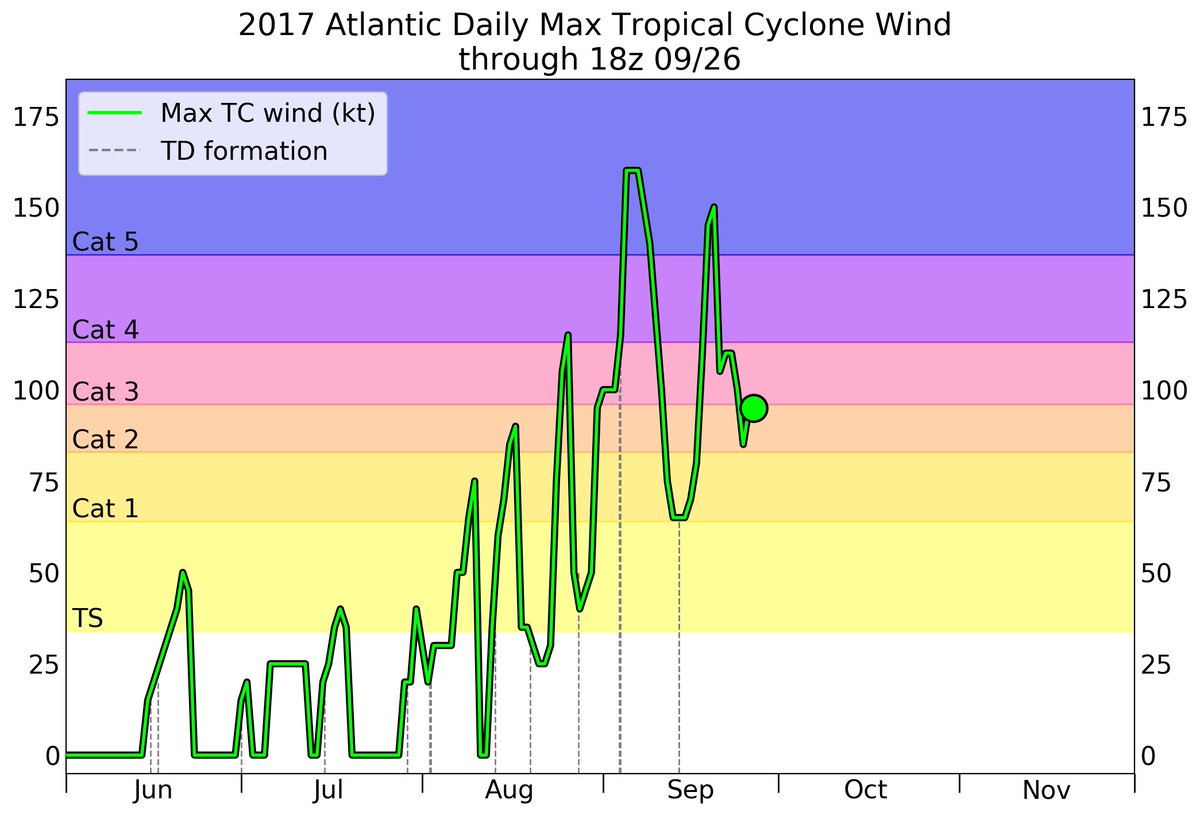 Every day this month has had a tropical cyclone in the Atlantic with hurricane force winds.

No matter how you slice it, it has already been a devastating hurricane season that ranks among the most extreme in history. Fortunately, the tropics are expected to calm down over next couple of weeks.

16 million people without power and 142-mph winds: Hurricane Irma, by the numbers

Why Hurricane Irma wasn’t far worse, and how close it came to catastrophe

Category 5 hurricanes have hit 6 land areas dead-on in 2017, more than ever before