SHELL'S 1991 VIDEO WARNING: CLIMATE CHANGING ‘AT FASTER RATE THAN AT ANY TIME SINCE END OF ICE AGE’...

Street-level sign and landscaping at base of 50-story at One Shell Plaza skyscraper - 910 Louisiana Houston Texas 77002. credit: Wolfgang Houston

Critics say public information film shows Shell ‘understood the threat was dire, potentially existential for civilization, more than a quarter of a century ago’

Climate change “at a rate faster than at any time since the end of the ice age – change too fast perhaps for life to adapt, without severe dislocation”. That was the startling warning issued by the oil giant Shell more than a quarter of a century ago.

The company’s farsighted 1991 film, titled Climate of Concern, set out with crystal clarity how the world was warming and that serious consequences could well result.

“Tropical islands barely afloat even now, first made inhabitable, and then obliterated beneath the waves … coastal lowlands everywhere suffering pollution of precious groundwater, on which so much farming and so many cities depend,” says the film’s narrator, over disturbing images of people affected by natural disasters and famine. “In a crowded world subject to such adverse shifts of climate, who would take care of such greenhouse refugees?”

The film acknowledged the uncertainties in the computer model predictions at the time, but noted the various scenarios had “each prompted the same serious warning, a warning endorsed by a uniquely broad consensus of scientists in their report to the United Nations at the end of 1990”. 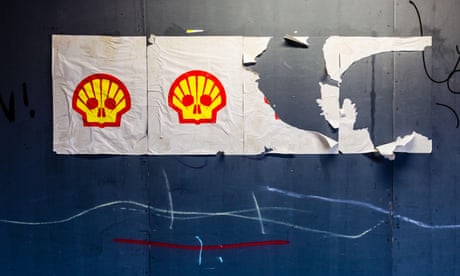 “What they foresee is not a steady and even warming overall, but alterations to the familiar patterns of climate, and the increasing frequency of abnormal weather,” it cautioned. “It is thought that warmer seas could make destructive [storm] surges more frequent and even more ferocious.”

“Whether or not the threat of global warming proves as grave as the scientists predict, is it too much to hope as it might act as the stimulus – the catalyst – to a new era of technical and economic cooperation?” the film concludes. “Our numbers are many, and infinitely diverse. But the problems and dilemmas of climatic change concern us all.” 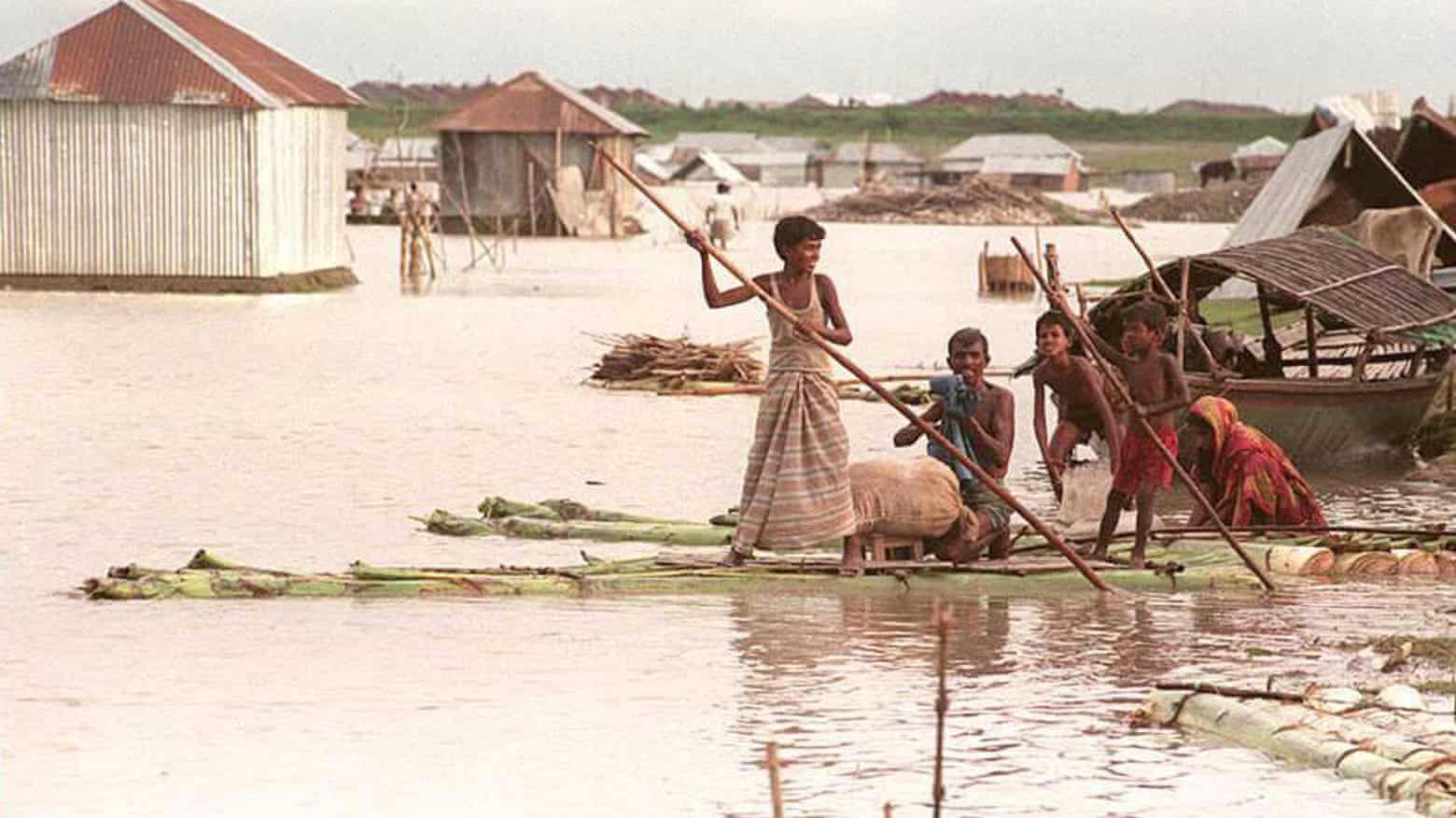 A family leaves their flooded home in Bangladesh. ‘In a crowded world subject to adverse shifts of climate, who would take care of such greenhouse refugees?’ says the film’s narrator. Photograph: Mufti Munir/AFP/Getty Images

The film was made for public viewing, particularly in schools and universities, but is believed to have been unseen for many years. It was remarkably prescient, according to Prof Tom Wigley, who was head of the Climate Research Unit at the University of East Anglia when it helped Shell with the 1991 film.

“It is amazing it is 25 years ago. Incredible,” he said. “It was quite comprehensive on what might happen, what the consequences are, and what we can do about it. I mean, there’s not much more.” He said the predictions for temperature and sea level rises in the 1991 film were “pretty good compared with current understanding”.

“What is really striking is nothing has happened [since] to make you doubt the science as it was stated then,” said Tom Burke, at the green thinktank E3G and a former member of Shell’s external review committee.

But Shell’s actions on global warming since 1991, such as major investments in highly polluting tar sands and lobbying against climate action, have been heavily criticised. In 2015, it was accused of behaving like a “psychopath” by the UK’s former climate change envoy and of being engaged in a cynical attempt to block action on global warming. Even its own former group managing director, Sir Mark Moody-Stuart, said in 2015 it was “distressing” that “remarkably little progress” had been made on climate change by Shell and other oil companies. 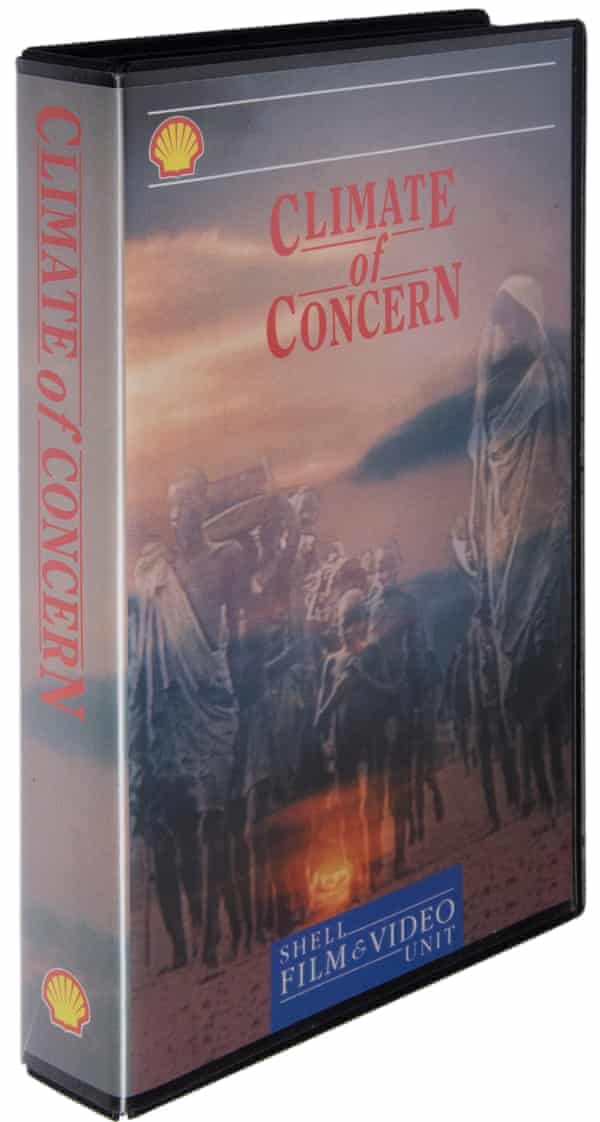 The revelation of the film, obtained by the Correspondent, a Dutch online journalism platform, and shared with the Guardian, has renewed the criticism.

“The film shows that Shell understood that the threat was dire, potentially existential for civilisation, more than a quarter of a century ago,” said Jeremy Leggett, a solar power entrepreneur and former geologist who had earlier researched shale deposits with Shell and BP funding.

“I see to this day how they doggedly argue for rising gas use, decades into the future, despite the clear evidence that fossil fuels have to be phased out completely,” he said. “I honestly feel that this company is guilty of a modern form of crime against humanity. They will point out that they have behaved no differently than their peers, BP, Exxon and Chevron. For people like me, of which there are many, that is no defence.”

Paul Spedding, HSBC’s former global head of oil and gas and now at the thinktank Carbon Tracker, said about half of Shell’s reserve base is natural gas, the least carbon intensive of the fossil fuels. “However, its oil portfolio could be a ticking tar-sands time bomb. Tar sands, which make up nearly 30% of group oil reserves, are significantly more carbon intensive than conventional oil. As things stand, Shell’s oil production is destined to become heavier, higher cost, and higher carbon, hardly a profile that fits the outlook described in Shell’s video.”

Shell had, in fact, known of the risks of climate change even earlier. A “confidential” company report written in 1986, also seen by the Guardian, noted the significant uncertainties in climate science at the time but warned of the possibility of “fast and dramatic” changes that “would impact on the human environment, future living standards and food supplies, and could have major social, economic, and political consequences”. 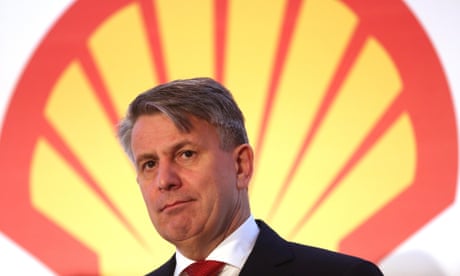 Shell says it will limit solar investment until it proves profitable...

In 1989, Shell had already taken the effects of climate change into account in the construction of an oil rig. But in the same year, the so-called Global Climate Coalition (GCC) was formed by the major oil companies, including Shell’s US operation Shell Oil. It lobbied hard to cast doubt on climate science and oppose government action, and in 1998 Shell withdrew, citing “irreconcilable” differences.

However, Shell remained a member of another business lobby group that campaigned against climate action, the American Legislative Exchange Council, until 2015 and remains a member of the Business Roundtable and American Petroleum Institute, which both fought against Barack Obama’s Clean Power Plan.

The company has said it has remained a member of groups that hold different views on climate action to “influence” them. But Thomas O’Neill, from the group Influence Map, which tracks lobbying, said: “The trade associations and industry groups are there to say things the company cannot or does not want to say. It’s deliberately that way.” 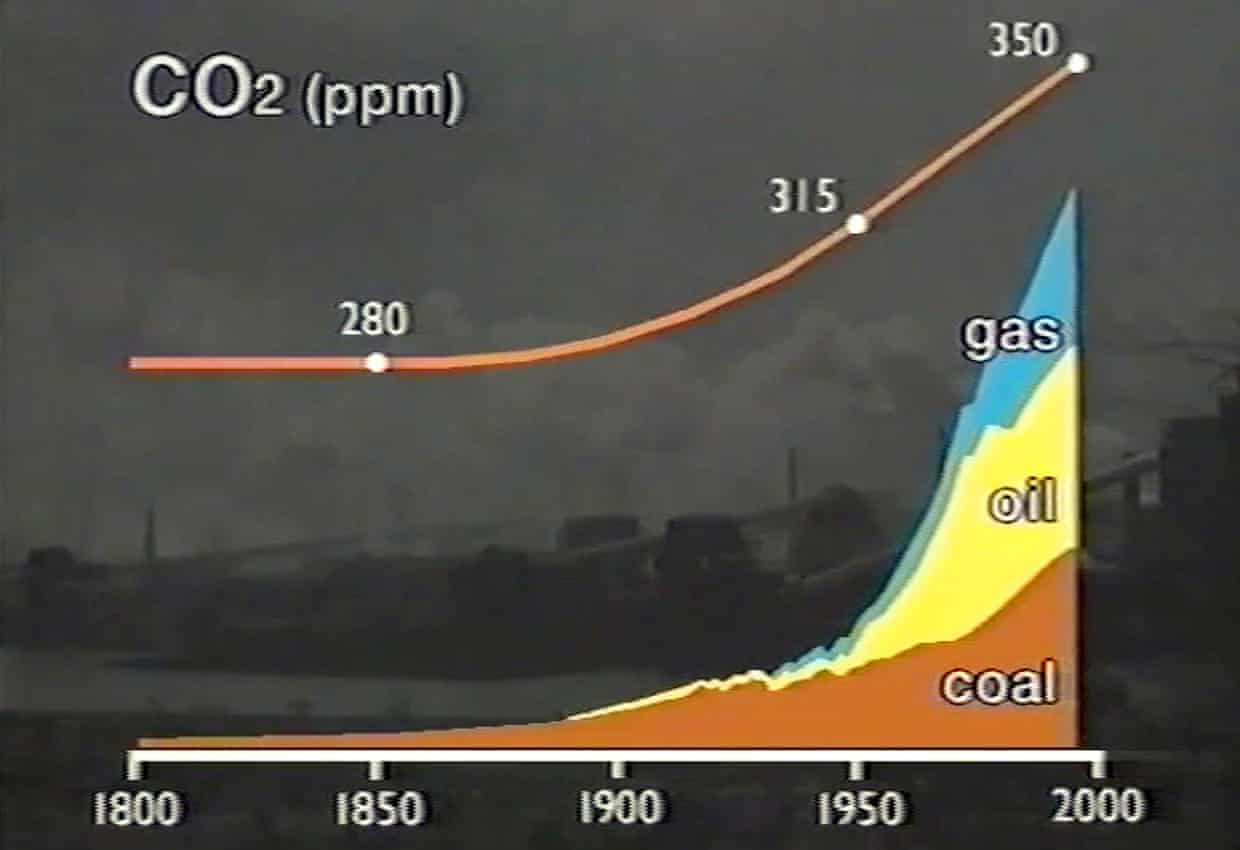 Shell has also lobbied directly to undermine European renewable energy targets, a sector it has invested in although at a much lower level than oil and gas. In 2016, Shell launched its New Energies division, with annual spending less than 1% of the total $30bn Shell pumps into oil and gas.

Despite the company’s public support since the 1990s for carbon taxes to drive cuts in emissions, in 2015 it lobbied for exemptions for the electricity it produces and uses, particularly for its offshore oil and gas platforms.

Editorial: Arctic temperatures have been 20C above normal. The ice cap is shrinking. And Trump and Putin may see it as an advantage

Some of Shell’s investments today are also criticised for being incompatible with the 2C warming target agreed by the world’s nations. A 2015 Carbon Tracker report concluded the company was planning to invest more than $75bn in such projects over the following decade, part of a “carbon bubble” in which reserves are being developed that cannot be burned if climate change is to be halted – a concern shared by the Bank of England and World Bank.

Another Carbon Tracker report in 2016 cited a 1998 Shell document showing the company was aware of this risk. “Shell knew about, but did not act on, the risks of a carbon bubble,” the report said. “Looking back over the last 20 years, it seems like Shell has gone backwards in terms of transparency, and is still recycling the same old green initiatives, and attempting to deflect responsibility in the face of an existential threat to its business.”

Shell was one of the first major oil companies to acknowledge the need to act on climate change and has long argued that providing affordable energy was vital for the world and its development. The 1991 film anticipated the problem: “How could [developing] countries continue to advance but leapfrog the energy-intensive face of development, by which other nations prospered before its adverse consequences came to light?” 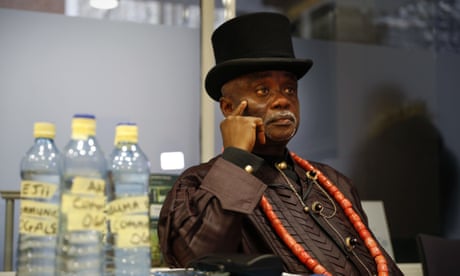 But in 2015 its own external review committee concluded Shell’s sustainability report did not “adequately convey the urgency of this [low-carbon energy] transition”. Earlier in February, Shell’s CEO Ben van Beurden said: “We believe that climate change is real and we believe that action will be needed.”

Moody-Stuart, who was also chairman of Shell from 1998-2002, told the Guardian the broad criticism of the company was unfair. “I don’t think enough has been done, but I wouldn’t single out the oil industry. Governments and others have some responsibility and Shell and others have called for a price on carbon since the 1990s.”

“It hasn’t got very far at all but that is not Shell’s fault,” he said. “It is pretty unique for an industry to be actually asking for something which will increase the price of their product, but they are asking for it because that is what is needed to drive the industry in the right direction.”

Burke, a former head of Friends of the Earth, agreed there is a wider problem. “It is too easy to blame it all on Shell for getting it wrong”, he said, as there has been “a broader societal failure”.

Shell’s 1986 report said the climate change problem was one that “ultimately only governments can tackle”. But it also noted, over three decades ago, that the energy industry “has very strong interests at stake and much expertise to contribute. It also has its own reputation to consider, there being much potential for public anxiety and pressure group activity.”