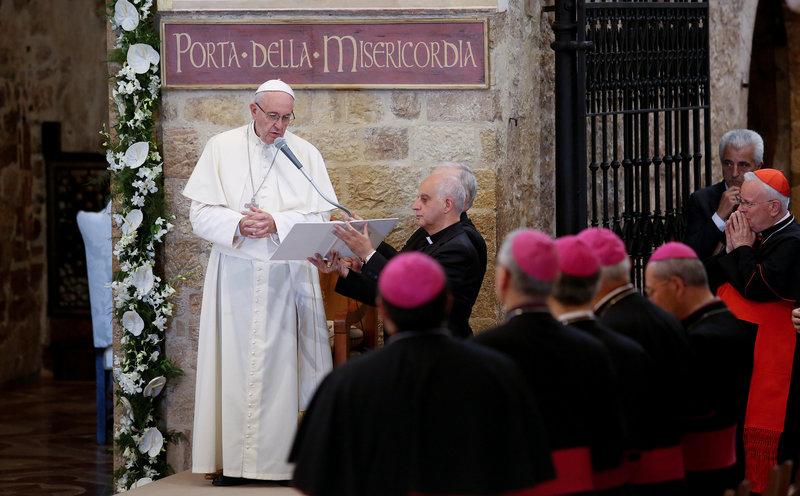 Pope Francis speaks outside the Porziuncola, the chapel inside the Saint Mary of Angels Basilica, in the pilgrimage town of Assisi, central Italy, August 4, 2016. REUTERS/Remo Casilli/File Photo

OSLO (Reuters) - Forty Roman Catholic groups said on Tuesday they were shunning investments in fossil fuels and urged others to follow suit...

The coalition was the largest number of Catholic institutions, in countries including Australia, South Africa, Britain and the United States, to team up for a shift to greener energies, the Global Catholic Climate Movement said.

Among those taking part was Assisi’s Sacro Convento and other Catholic institutions in the Italian town, birthplace of Saint Francis, who inspired Pope Francis.

The “joint divestment from fossil fuels is based on both their shared value of environmental protection and the financial wisdom of preparing for a carbon-neutral economy,” the Global Catholic Climate Movement said.

It did not estimate the value of their fossil fuel holdings. Several, contacted by Reuters, said they had few or none to sell and wanted mainly to rule out future investments and urge others to divest.

The Assisi municipality allied itself with the 40.

“Many people say that Assisi is the city on the mountain - all people can see the choices, political and environmental, that Assisi takes,” mayor Stefania Proietti told Reuters.

She said the town was investing in cleaner energy, such as solar panels on rooftops, and electric vehicles.

FILE PHOTO: Pope Francis speaks outside the Porziuncola, the chapel inside the Saint Mary of Angels Basilica, in the pilgrimage town of Assisi, central Italy, August 4, 2016. REUTERS/Remo Casilli/File Photo

The Sacro Convento said it wanted “to end the fossil fuels era in the global economy.” It had installed low-energy lighting by Saint Francis’ tomb.

The Pope credits Saint Francis, known for his poverty and love of nature, in a 2015 encyclical urging action to halt global warming to safeguard the planet.

Some investors, such as pension funds, sovereign wealth funds and universities, have sold fossil fuel stocks especially since the 195-nation Paris climate agreement set a goal in 2015 of phasing out use of fossil fuels this century.

U.S. President Donald Trump, however, said in June he plans to pull out of the pact and promote jobs in the U.S. fossil fuel industry.

Ben Caldecott, founding director of the Oxford sustainable finance programme at the University of Oxford, said: “Groups with moral authority, religious groups being a good example, are likely to have a disproportionate impact in terms of increasing stigma” of investing in fossil fuels.

The International Energy Agency projects that fossil fuels will account for more than half of world energy demand in 2040, even with a big green shift. Fossil fuel companies such as Exxon Mobil or Royal Dutch Shell say they are limiting emissions.

“Today’s announcement is a further sign we are on the way to achieving our collective mission,” said Christiana Figueres, the U.N.’s climate chief at the time of the Paris Agreement. “We still have a long way to go, however.”