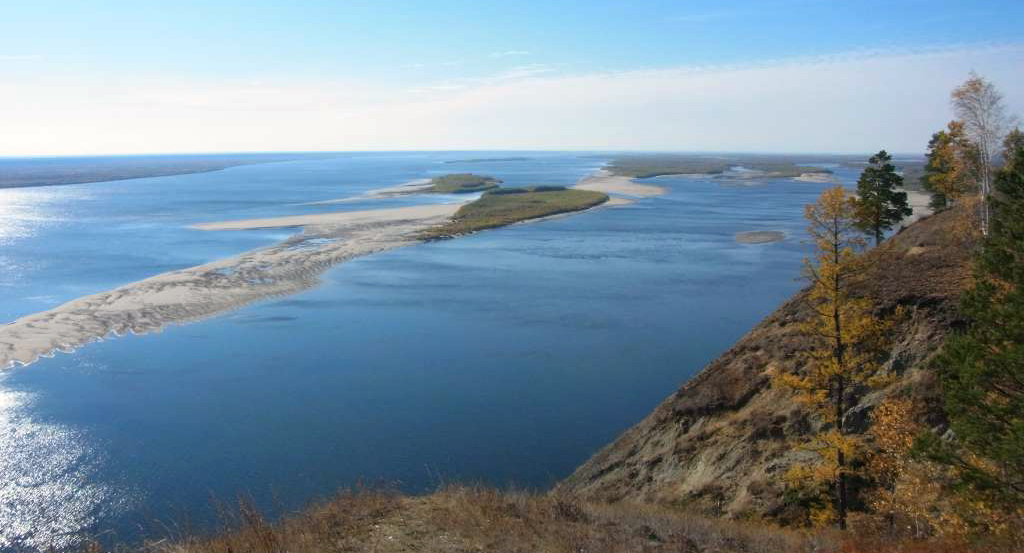 The Lena River near the Arctic Ocean. Yoshihiro Iijima / JAMSTEC

As Siberian permafrost thaws, crumbling Russian coastlines and big rivers flowing north along eroding banks are dumping vast loads of organic carbon into marine waters there, causing much quicker acidification than had been anticipated and signaling future danger for the entire Arctic Ocean...

So says a newly published study by a team of scientists from the University of Alaska Fairbanks, the Russian Academy of Sciences and other institutions in Russia and Sweden. The scientists have been working together for years to study the East Siberian Arctic Shelf, a marine area that accounts for about a quarter of the Arctic Ocean’s open waters.

Observations made since 1999 showed signs that in some locations, acidity has already surged past levels researchers didn't expect to emerge until the year 2100, due in part to "extreme aragonite undersaturation," the study says.

Aragonite is a form of calcium carbonate that is pervasive in the ocean and tilts the chemistry toward the base level of the pH scale. Carbon in the water tilts the pH scale toward the acid level. The degree to which the water is saturated with aragonite is a marker of overall calcium levels -- and a marker of acidification caused by increasing loads of carbon in the water, according to NOAA.

Since the East Siberian Arctic Shelf is so important to the Arctic Ocean’s open water, the chemistry changes could have wide-ranging effects, the study’s authors said.

“As these waters are exported to the surface of the central Arctic Ocean, the consequences of the effects on marine ecosystems in the entire Arctic Ocean would be extensive,” lead author Igor Semiletov, a scientist with UAF’s Institute of Arctic Research, said in a statement released by the university.

Marine waters in the far north are already known to be vulnerable to acidification because of their cold temperatures that hold carbon and other attributes. At-risk sites include the Beaufort, Chukchi and Bering seas, where ocean currents and biological characteristics help prime conditions for shifts to more acidic chemistry, according to research by scientists at the National Oceanic and Atmospheric Administration.

The research from the East Siberian Arctic Shelf now adds to evidence pointing to a faster-acidifying Arctic Ocean.

The Lena River, a major source of freshwater in the Arctic, is a big player in the East Siberian Arctic Shelf acidification process. The 2,800-mile river, which ends in a wide and braided delta on the permafrost-laden Arctic coastline, is the longest in Russia and has a basin that covers about a fifth of that nation’s territory.

But on the East Siberian Arctic Shelf, the carbon washed into the sea by eroding permafrost and river outwash -- material formed by decaying and decayed plants and animals -- far outpaces the carbon coming from the atmosphere and is enough to cause acidification on its own, according to the new study.

Freshening of salty ocean water is one cause of acidification, as it dilutes the ocean’s calcium, but in the case of the East Siberian Arctic Shelf, the terrestrial carbon is a much bigger source, according to the new study.

Jessica Cross, an acidification expert with NOAA’s Pacific Marine Environmental Laboratory, said she was not surprised by the results.

“The degradation of organic matter occurs all over the world, but it can only cause undersaturated conditions by itself in special cases, and the East Siberian Sea is a very extreme special case,” Cross said in an email.

The big role that land-based material plays in those waters’ chemical transformation “is only possible because there are several very large rivers that all drain into the East Siberian, which as a whole discharge very high amounts of terrestrial carbon, enough to naturally acidify these waters to corrosive levels as it breaks down,” she said.

While manmade carbon emissions have hastened the process, there is evidence that the East Siberian Arctic Shelf has been receiving large amounts of terrestrial carbon since preindustrial times, Cross said. Waters there may have evolved to conditions of aragonite undersaturation, she said.