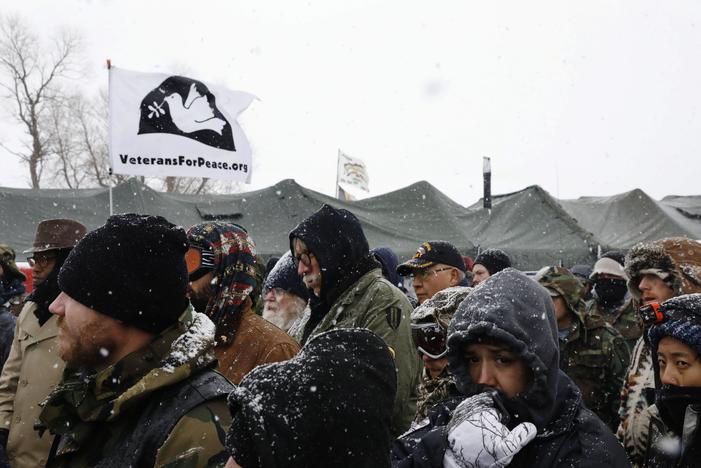 Veterans gather for a briefing inside of the Oceti Sakowin camp during a snow fall as 'water protectors' continue to demonstrate against plans to pass the Dakota Access pipeline adjacent to the Standing Rock Indian Reservation, near Cannon Ball, North Dakota, U.S., December 5, 2016. REUTERS/Lucas Jackson
A Native American leader asked thousands of protesters to return home after the federal government ruled against a controversial pipeline, despite the prospect of President-elect Donald Trump reversing the decision after he takes office...

A coalition of Native American groups, environmentalists, Hollywood stars and veterans of the U.S. armed forces protested the $3.8 billion oil project. They said construction would damage sacred lands and any leaks could pollute the water supply of the Standing Rock Sioux tribe.

The tribe still wants to speak with Trump about the Dakota Access Pipeline to prevent him from approving the final phase of construction, Standing Rock Sioux Chairman Dave Archambault told Reuters.

"The current administration did the right thing and we need to educate the incoming administration and help them understand the right decision was made," he said.Trump's transition team said on Monday it would review the decision to delay completion once he takes office Jan. 20.

"That's something that we support construction of and we'll review the full situation when we're in the White House and make the appropriate determination at that time," Trump spokesman Jason Miller said at a transition team news briefing.

Archambault said nothing would happen over the winter before Trump takes power, so protesters should leave. Many had dug in for the harsh winter of the North Dakota plains, where a blizzard hit on Monday and 40 miles-per-hour (64 kmh) winds rattled tipis and tents.

"We're thankful for everyone who joined this cause and stood with us," he said. "The people who are supporting us ... they can return home and enjoy this winter with their families. Same with law enforcement. I am asking them to go."

It was unclear if protesters would heed Archambault's call to leave the Oceti Sakowin camp in Cannon Ball, North Dakota. 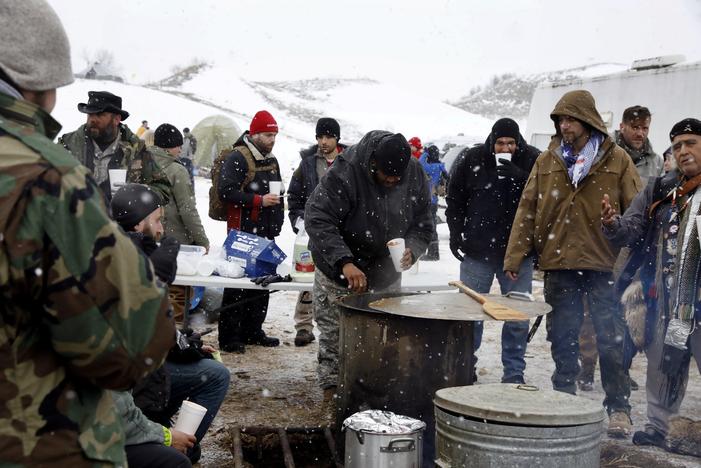 Veterans eat from a communal kitchen inside of the Oceti Sakowin camp during a snow fall as 'water protectors' continue to demonstrate against plans to pass the Dakota Access pipeline adjacent to the Standing Rock Indian Reservation, near Cannon Ball, North Dakota, U.S., December 5, 2016. REUTERS/Lucas Jackson

On Sunday, the U.S. Army Corps of Engineers rejected an application for the pipeline to tunnel under Lake Oahe, a reservoir formed by a dam on the Missouri River.

The Army Corps said it would analyze possible alternate routes, although any other route is likely to cross the Missouri River.

The camp celebrated the decision, but some expressed concern their victory could be short-lived.

"I think this is just a rest," Charlotte Bad Cob, 30, of the Pine Ridge Reservation in South Dakota, said on Sunday. "With a new government it could turn and we could be at it again."

On Monday, tribal leaders and hundreds of veterans walked to Backwater Bridge, one of the focal points of the protests, and offered prayers and chanted after the victory.

Several veterans said they had no plans to leave and suspected Sunday's decision was a ruse to empty the camp. 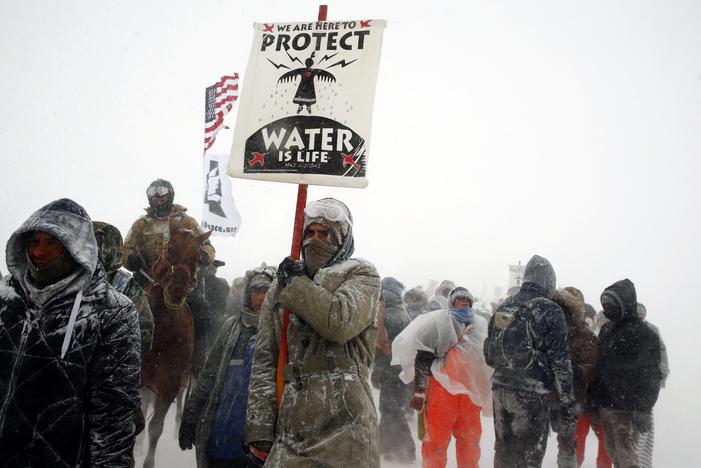 Veterans join activists in a march just outside the Oceti Sakowin camp during a snow fall as 'water protectors' continue to demonstrate against plans to pass the Dakota Access pipeline adjacent to the Standing Rock Indian Reservation, near Cannon Ball, North Dakota, U.S., December 5, 2016. REUTERS/Lucas Jackson

The company building the 1,172-mile (1,885-km) pipeline, Energy Transfer Partners, said late on Sunday that it had no plans to reroute the line, and expected to complete the project.

The Obama administration's decision was a "political action", ETP said in a joint statement on Sunday with its partner Sunoco Logistics Partners.

The pipeline is complete except for a 1-mile (1.61 km)segment that was to run under Lake Oahe, which required permission from federal authorities.

The chief executive of ETP, Kelcy Warren, donated to Trump's campaign, while the president-elect has investments in ETP and Phillips 66, another partner in the project.