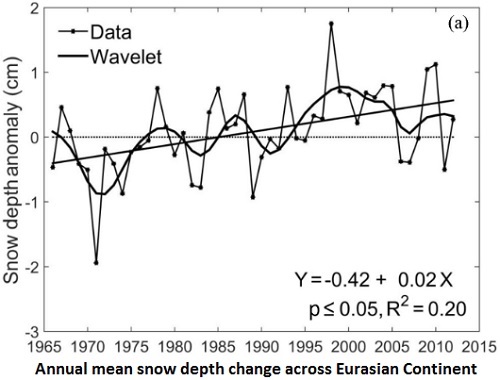 The figure above is from paper article #30.

"The basic result was that even as the lower atmosphere gradually warms, the upper atmosphere rapidly cools. The simulations employed constant low solar activity conditions, to remove the effects of variable solar and geomagnetic activity. Global mean annual mean temperature increased at a rate of +0.2 K/decade at the surface and +0.4 K/decade in the upper troposphere, but decreased by about -1 K/decade in the stratosphere-mesosphere, and -2.8 K/decade in the thermosphere. Near the mesopause, temperature decreases were small compared to the interannual variation, so trends in that region are uncertain."

2. Towards the Application of Decadal Climate Predictions

5. Trend in the co-occurrence of extreme daily rainfall in West Africa since 1950

8. Global, Regional, and Megacity Trends in the Highest Temperature of the Year: Diagnostics and Evidence for Accelerating Trends

10. Towards predicting changes in the land monsoon rainfall a decade in advance

11. A new assessment in total and extreme rainfall trends over central and southern Peruvian Andes during 1965–2010

"The results show that the magnitude of warming in East Asia is approximately 0.2°C higher than the global mean. Most populous subregions, including eastern China, the Korean Peninsula and Japan, will see more intense, more frequent and longer lasting extreme temperature events under 1.5°C and 2°C warming. The 0.5°C lower warming will help avoid 35%-46% of the increases in extreme high-temperature events in terms of intensity, frequency and duration in East Asia with maximal avoidance values (37%-49%) occurring in Mongolia. Thus, it is beneficial for East Asia to limit the warming target to 1.5°C rather than 2°C."

15. Linking Hadley circulation and storm tracks in a conceptual model of the atmospheric energy balance

16. Local-scale analysis of temperature patterns over Poland during heatwave events

17. Spatiotemporal changes in the size and shape of heat waves over North America

20. Probability distribution for the visually observed fractional cloud cover over the ocean

21. The contrasting climate response to tropical and extratropical energy perturbations

"Equilibrium climate sensitivity (ECS), defined as the long-term change in global mean surface air temperature in response to doubling atmospheric CO2, is usually computed from short atmospheric simulations over a mixed layer ocean, or inferred using a linear regression over a short-time period of adjustment. We report the actual ECS from multi-millenial simulations of two GFDL general circulation models (GCMs), ESM2M and CM3 of 3.3 K and 4.8 K, respectively. Both values are ~1 K higher than estimates for the same models reported in the Fifth Assessment Report of the Intergovernmental Panel on Climate Change obtained by regressing the Earth's energy imbalance against temperature. This underestimate is mainly due to changes in the climate feedback parameter (−α) within the first century after atmospheric CO2 has stabilized. For both GCMs it is possible to estimate ECS with linear regression to within 0.3 K by increasing CO2 at 1% per year to doubling and using years 51-350 after CO2 is constant. We show that changes in −α differ between the two GCMs and are strongly tied to the changes in both vertical velocity at 500 hPa (ω500) and estimated inversion strength (EIS) that the GCMs experience during the progression towards the equilibrium. This suggests that while cloud physics parametrizations are important for determining the strength of −α, the substantially different atmospheric state resulting from a changed SST pattern may be of equal importance."

24. Sulfate aerosol in the Arctic: source attribution and radiative forcing

25. Simple models for the simulation of submarine melt for a Greenland glacial system model

30. Spatiotemporal variability of snow depth across the Eurasian continent from 1966 to 2012

"By influencing the ocean heat uptake efficiency and by shifting the pattern of heat uptake, global air temperatures are significantly altered on a multidecadal time scale by AMOC variability."

37. Short and long-term controls on active layer and permafrost carbon turnover across the Arctic

39. Coastal Erosion of Permafrost Soils along the Yukon Coastal Plain and Fluxes of Organic Carbon to the Canadian Beaufort Sea

41. Origin of elemental carbon in snow from western Siberia and northwestern European Russia during winter–spring 2014, 2015 and 2016

"In NW European Russia transportation and domestic combustion from Finland was important. A systematic underestimation was found in W Siberia at places where gas flaring was important, implying miscalculation or sources."

44. Characteristics of CO2 Concentration and Flux in the Beijing Urban Area

45. Sources of uncertainty in modeled land carbon storage within and across three MIPs: Diagnosis with three new techniques

46. 21st century sea-level rise in line with the Paris accord

48. Mechanism of Future Spring Drying in the Southwest U.S. in CMIP5 Models

49. Warming autumns at high latitudes of Europe: an opportunity to lose or gain in cereal production?

"Warming autumns have insignificant potential for additional cereal yield gains. Even the latest maturing wheat cultivars would mature by the same time or earlier than currently when sown earlier. However, inter-annual variability in harvest times remains high, and hence many emerging risks may result from the elevated autumn precipitation in the future that will accompany delayed harvests."

53. Changing risk of spring frost damage in grapevines due to climate change? A case study in the Swiss Rhone Valley

54. Breeding implications of drought stress under future climate for upland rice in Brazil

55. High-Resolution Monitoring of Weather Impacts on Infrastructure Networks using the Internet of Things

58. Seasonality matters—The effects of past and projected seasonal climate change on the growth of native and exotic conifer species in Central Europe

"Two invasive species, Ageratum conyzoides and Parthenium hysterophorus, will lose overall suitable area by 2070, while Ageratina adenophora, Chromolaena odorata and Lantana camara will gain suitable areas and all of them will retain most of the current habitat as stable."

61. Toward a global coal mining moratorium? A comparative analysis of coal mining policies in the USA, China, India and Australia

62. Accounting for effects of carbon flows in LCA of biomass-based products—exploration and evaluation of a selection of existing methods

"We found that including the impact of land use and carbon cycles had a profound effect on the results for global warming impact potential. It changed the ranking among the different routes for PE production, sometimes making biomass-based PE worse than the fossil alternative."

63. An introduction to the special issue on the Benefits of Reduced Anthropogenic Climate changE (BRACE)

"Here, we provide a brief summary of the project design, expanding on its relation to the scenario literature, and an overview of the papers included in the issue. While we leave the discussion of results mainly to the synthesis paper, we extend it here to include some additional detail on the relationship between BRACE results and those from other avoided impact studies, and emphasize future research needs."

65. Analysis of the global carbon dioxide emissions from 2003 to 2015: convergence trends and regional contributions

66. As Bad as it Gets: How Climate Damage Functions Affect Growth and the Social Cost of Carbon

67. The value of knowledge accumulation on climate sensitivity uncertainty: comparison between perfect information, single stage and act then learn decisions

69. Perceptions of climate change risk in The Bahamas

71. Quantifying and comparing effects of climate engineering methods on the Earth system

72. The Signaling Effect of Emission Taxes Under International Duopoly

73. Current sources of carbon tetrachloride (CCl4) in our atmosphere

75. Near-surface permafrost aggradation in Northern Hemisphere peatlands shows regional and global trends during the past 6000 years

76. Climate variability in the subarctic area for the last 2 millennia

"A focus on the last 2 centuries shows a recent warming characterized by a well-marked warming trend parallel with increasing greenhouse gas emissions. It also shows a multidecadal variability likely due to natural processes acting on the internal climate system on a regional scale. A ∼ 16–30-year cycle is found in Alaska and seems to be linked to the Pacific Decadal Oscillation, whereas ∼ 20–30- and ∼ 50–90-year periodicities characterize the North Atlantic climate variability, likely in relation with the Atlantic Multidecadal Oscillation. These regional features are probably linked to the sea ice cover fluctuations through ice–temperature positive feedback."

Posted on 2 February 2018 by Ari Jokimäki