SOARING OCEAN TEMPERATURE IS 'GREATEST HIDDEN CHALLENGE OF OUR GENERATION'... 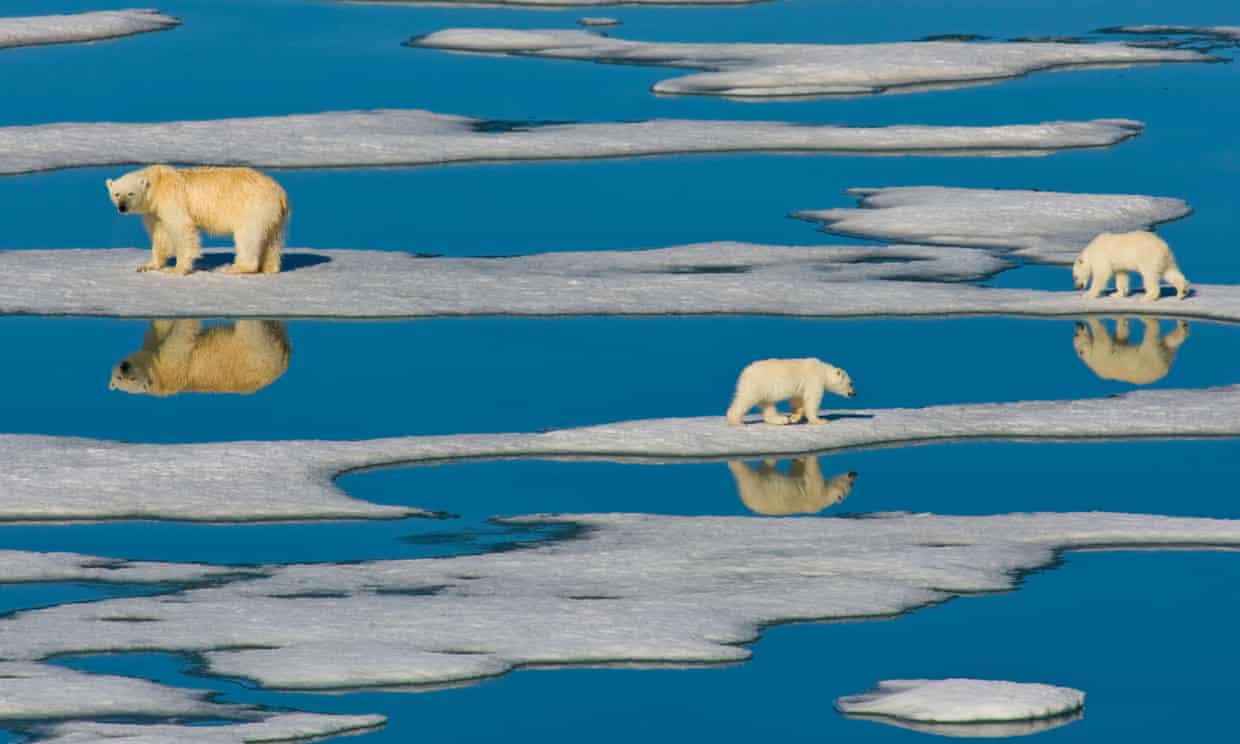 The scale of warming in the ocean is ‘truly staggering’, the report warns. Photograph: Ralph Lee Hopkins/Alamy

The soaring temperature of the oceans is the “greatest hidden challenge of our generation” that is altering the make-up of marine species, shrinking fishing areas and starting to spread disease to humans, according to the most comprehensive analysis yet of ocean warming.

The oceans have already sucked up an enormous amount of heat due to escalating greenhouse gas emissions, affecting marine species from microbes to whales, according to an International Union for Conservation of Nature (IUCN) report involving the work of 80 scientists from a dozen countries.

The profound changes underway in the oceans are starting to impact people, the report states. “Due to a domino effect, key human sectors are at threat, especially fisheries, aquaculture, coastal risk management, health and coastal tourism.”

Dan Laffoley, IUCN marine adviser and one of the report’s lead authors, said: “What we are seeing now is running well ahead of what we can cope with. The overall outlook is pretty gloomy.

“We perhaps haven’t realised the gross effect we are having on the oceans, we don’t appreciate what they do for us. We are locking ourselves into a future where a lot of the poorer people in the world will miss out.”

The scale of warming in the ocean, which covers around 70% of the planet, is “truly staggering”, the report states. The upper few metres of ocean have warmed by around 0.13C a decade since the start of the 20th century, with a 1-4C increase in global ocean warming by the end of this century. The ocean has absorbed more than 90% of the extra heat created by human activity. If the same amount of heat that has been buried in the upper 2km of the ocean had gone into the atmosphere, the surface of the Earth would have warmed by a devastating 36C, rather than 1C, over the past century.

At some point, the report says, warming waters could unlock billions of tonnes of frozen methane, a powerful greenhouse gas, from the seabed and cook the surface of the planet. This could occur even if emissions are drastically cut, due to the lag time between emitting greenhouse gases and their visible consequences.

Warming is already causing fish, seabirds, sea turtles, jellyfish and other species to change their behaviour and habitat, it says. Species are fleeing to the cooler poles, away from the equator, at a rate that is up to five times faster than the shifts seen by species on land.

Even in the north Atlantic, fish will move northwards by nearly 30km per decade until 2050 in search of suitable temperatures, with shifts already documented for pilchard, anchovy, mackerel and herring.

The warming is having its greatest impact upon the building blocks of life in the seas, such as phytoplankton, zooplankton and krill. Changes in abundance and reproduction are, in turn, feeding their way up the food chain, with some fish pushed out of their preferred range and others diminished by invasive arrivals.

With more than 550 types of marine fishes and invertebrates already considered threatened, ocean warming will exacerbate the declines of some species, the report also found.

The movement of fish will create winners and losers among the 4.3 billion people in the world who rely heavily upon fish for sustenance. In south-east Asia, harvests from fisheries could drop by nearly a third by 2050 if emissions are not severely curtailed. Global production from capture fisheries has already levelled off at 90m tonnes a year, mainly due to overfishing, at a time when millions more tonnes will need to be caught to feed a human population expected to grow to 9 billion by 2050.

Humans are also set to suffer from the spread of disease as the ocean continues to heat up. The IUCN report found there is growing evidence of vibrio bacterial disease, which can cause cholera, and harmful algal bloom species that can cause food poisoning. People are also being affected by more severe, if not more numerous, hurricanes due to the extra energy in the ocean and atmosphere.

Coral reefs, which support around a quarter of all marine species, are suffering from episodes of bleaching that have increased three-fold over the past 30 years. This bleaching occurs when prolonged high temperatures cause coral to expel its symbiotic algae, causing it to whiten and ultimately die, such as the mass mortality that has gripped the Great Barrier Reef.

Ocean acidification, where rising carbon dioxide absorption increases the acidity of the water, is making it harder for animals such as crabs, shrimps and clams to form their calcium carbonate shells.

The IUCN report recommends expanding protected areas of the ocean and, above all, reduce the amount of heat-trapping gases pumped into the atmosphere.

“The only way to preserve the rich diversity of marine life, and to safeguard the protection and resources the ocean provides us with, is to cut greenhouse gas emissions rapidly and substantially,” said Inger Andersen, director general of the IUCN.