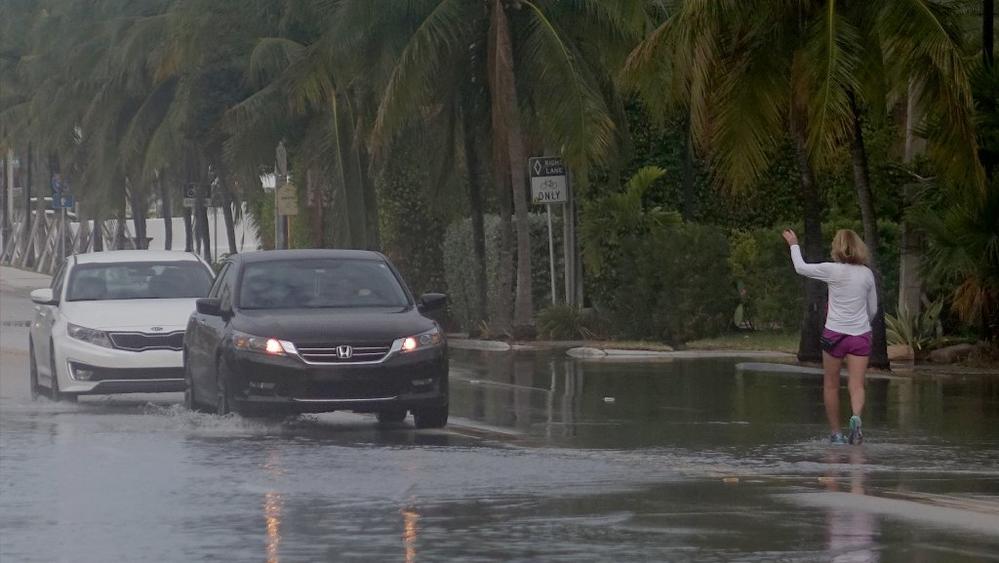 Flooding from seasonal king tides has worsened in Fort Lauderdale as a result of sea-level rise. (Joe Cavaretta/Sun-Sentinel)

South Florida is taking more steps to protect against climate change and the rising seas that already are spilling over into neighborhoods...

This month, Broward County ordered that new flood maps be drawn using predictions of higher waters, the latest in a series of steps taken from Palm Beach County to the Keys.

Fort Lauderdale raised the required height of sea walls and the elevation of home sites; Delray Beach added valves to keep salt water out of the city drainage system; Broward County put a financing program in place for homeowners who want to tap solar energy.

That doesn’t mean Florida is all ready and set for the ill effects of rising global temperatures. A nationally recognized advocacy group that rated states on preparedness gave Florida a C- .

The causes of climate change and debate about how far government should go to prepare for it continue to be a political flash point nationally. But at Florida’s southern end, densely populated and with billions in real estate at stake, preparing for it has become commonplace.

“It’s mainstream planning these days,’’ Palm Beach County Commissioner Steve Abrams said. “It [also] took a while for people to understand that cigarettes are bad for you or to put on your seat belt.’’

The National Oceanic and Atmospheric Administration says sea level has been rising over the past century, and the rate is increasing.

Climate change is expected to lead to increased flooding along the coast and inland, intrusion of salt water into the underground freshwater supply, decrease in property values and an increase in insurance costs, the multicounty compact says. 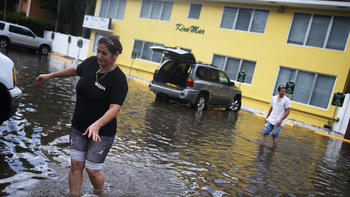 Just five years ago, critics accused the Broward County Commission of falling into a United Nations “Agenda 21’’ plot to take control over America, when what was then referred to as “global warming’’ came up. Since then, climate change planning has become as ordinary in South Florida government as hardening for hurricanes.

“We have to do all we can to effect a slowing of climate change, of sea level rise, whatever we can do,’’ said Broward Commissioner Nan Rich, a former state senator. “And I don’t think that a good percentage of it is about money. It’s about how we live, what kind of development we have.’’

South Florida has been nationally recognized for leadership on the issue.

Eight years ago, in 2009, Broward, Palm Beach, Miami-Dade and Monroe counties, a region of 6 million people representing 30 percent of Florida’s population, banded together to study and react to the planetary weather changes. In 2015, President Obama visited the Florida Everglades to highlight the threat of climate change, and praised the four-county compact as “a model not just for the country, but for the world.’’

The work that’s been done mostly is marked in policies and maps, hidden in the labyrinths of bureaucracy, largely unnoticed by the public. But the work will guide the spending of public funds, and will change how homes, buildings, roads and sidewalks are built, as the region redevelops.

Rising seas: Inching toward disaster
"It’s about how we live, what kind of development we have.’’ — Broward Commissioner Nan Rich

For example, when a one- or two-story home is torn down and replaced in Fort Lauderdale, the new home must be built on higher ground. City spokesman Chaz Adams said the new requirements were set in place in 2014, a foot higher than elevations in new FEMA maps.

“The adoption of a higher elevation requirement is one of several proactive steps the city has taken to adapt to sea level rise and climate change,’’ Adams said.

The city last summer also increased the required height of sea walls, a rule that applies when a new one is built or an existing one is significantly repaired. 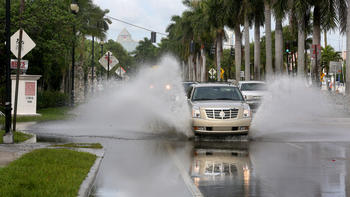 It recently completed and opened a waste-to-energy plant, where household refuse is transformed into electricity.

Broward incorporated climate change planning into its “Broward Next’’ vision for future development, the Comprehensive Land Use Plan that’s making its way to approval. The county also created a “Plan it Green’’ program, where event organizers or tourists can calculate their carbon footprint and offset it by paying for the local planting of trees.

Broward County inventoried greenhouse gas emissions, from airplanes, electricity, transportation and solid waste, among other sources, and set a target to reduce them 80 percent below the 2007 level by 2050. Monroe County plans to reduce emissions by 15 percent

Abrams said a study in Palm Beach County found emissions dropped there, also. He said getting more people to ride Tri-Rail trains has helped by getting the equivalent of one lane of Interstate 95 traffic off the roads each day.

All four counties have agreed to ward off flooding by planning for higher sea levels, working to adopt new forecast maps like Broward voted on earlier this month. The new sea level projections would come into play during construction, leading to new requirements for handling stormwater and drainage.

States at Risk, a climate change research group that in 2015 produced the first national assessment of readiness, acknowledged some work has been done, but rated Florida a C- in preparing for extreme heat, drought, wildfires, inland flooding and coastal flooding. The state wasn’t among the best, or the worst.

“Florida has a lot of work to do,’’ the report card summarized.

The preparations come with a cost. Broward, for example, has spent about $2 million on modeling and planning so far, Chief Climate Resilience Officer Jennifer Jurado estimated, with the county paying 60 percent and cities and the federal government paying the remainder.

Jurado said the money spent is an investment “in our community, economy and quality of life.”

Brittany Wallman can be reached at [email protected] or 954-356-4541. Find her on Twitter at @BrowardPolitics or @BrittanyWallman.