SOUTH VIETNAMESE HAVE NEW JOBS THANKS TO RISING LEVELS OF SEAWATER... 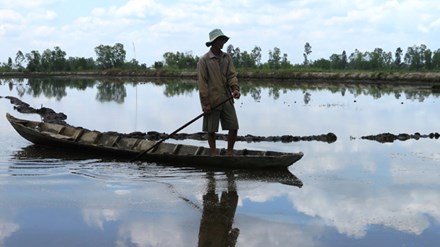 Sea water rise and saline intrusion have damaged crops this year, but they have offered opportunities for farmers to breed shrimp on rice fields. Credit: VietNamNet Bridge

After several years of trying to breed shrimp on rice fields, locals in Nguyen Phich Commune are better off despite the influence of climate change...

Dam Van Nguyen from Hamlet 20 said about 500 poor households and ethnic minority families in the province were allocated land to grow rice and plant forests in 1992. But many of them left because of difficult lives.

However, things are getting different now. “Since farmers alternate rice growing and shrimp hatchery, they are better off,” Nguyen said.

“The people who left home have come back, while people from other provinces have come to lease land for growing rice and breeding shrimp,” he said. “The rice yield has also increased by twofolds."

Doan Van Day in Tan Hung commune of Cai Nuoc district said the time from the year-end to May of the next year is the best for shrimp hatchery.

“The rice-shrimp crop rotation is far better than pure rice growing,” Day said, adding that farmers many times had crop failure because of early saline intrusion.

The attractive profit has prompted farmers to follow the new cultivation mechanism. In Kien Giang province, in 2010-2015, the shrimp-rice area in the coastal districts of An Bien, An Minh, Vinh Thuan, Go Quao and Hon Dat increased by 7 percent per annum.

“The shrimp yield is 373 kilos per hectare, while rice 4-5 tons per hectare, or even 6-7 hectares in some areas,” said Luong Ngoc Lan, director of the Bac Lieu provincial Department of Agriculture and Rural Development.

Bac Lieu is the third province in the Ca Mau peninsula area which has shrimp-rice cultivation areas, about 29,867 hectares.

“Farmers should not be asked to grow so much rice anymore,” he said.

“In other countries, many farmers don’t grow rice, but grow fruits to sell for money and buy cheap rice from Vietnam,” he said.