SPIKE IN ALASKA WILDFIRES IS WORSENING GLOBAL WARMING, US SAYS... 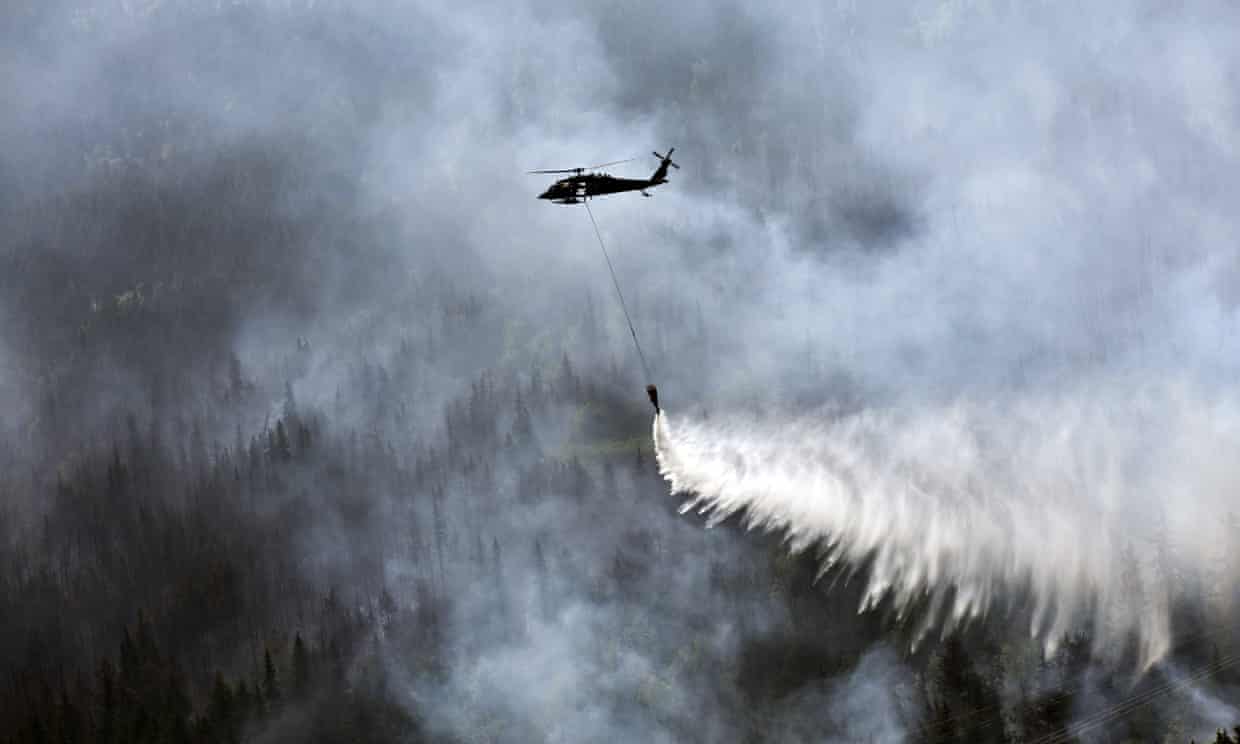 A �Bambi Bucket� hanging from a helicopter releases hundreds of gallons of water on to the Stetson Creek Fire near Cooper Landing, Alaska, last year. Photograph: Sgt Balinda O'Neal/AP

Report from US Geological Survey says northern wildfires must now be seen as significant driver of climate change, not just a side-effect...

The devastating rise in Alaska’s wildfires is making global warming even worse than scientists expected, US government researchers said on Wednesday.

The sharp spike in Alaska’s wildfires, where more than 5 million acres burned last year, are destroying a main buffer against climate change: the carbon-rich boreal forests, tundra and permafrost that have served as an enormous carbon sink.

Northern wildfires must now be recognised as a significant driver of climate change – and not just a side-effect, according to the report from the US Geological Survey.

“This is one of the surprises that we haven’t talked about much,” said Virginia Burkett, chief climate scientist at the USGS. “It has tremendous implications for the carbon that is locked up in Alaska soils and vegetation.”

A record wildfire year – such as 2015 which was the worst in Alaska for a decade – had a measurable effect on the release of carbon dioxide and methane, which are the main drivers of climate change.

“Our scientists found that the balance of carbon storage versus release in Alaska was strongly linked with wildfires,” Burkett said. “In years where there was high wildfire activity the net carbon balance declined dramatically, and then it would rebuild in the absence of fire.”

Alaska is a far bigger storehouse for carbon than the lower 48 states, according to the USGS.

The state’s boreal forests, peat-rich tundra, and permafrost hold about 53% of US carbon. Alaska accounts for about 18% of US land mass.

Alaska currently absorbs about 3.7m tonnes of carbon a year, the USGS assessment found. But that vast storehouse of carbon has been breached by warming temperatures, thawing permafrost – and wildfire.

The USGS warned last year that Alaska could lose about a quarter of its permafrost by 2100, accelerating climate change.

In an average year, Alaska wildfires devour twice the area burned by wildfires in all of the lower 48 – and emit more greenhouse gases than all of those other wildfires combined, the USGS said.

Such fires across the northern US and Canada – which last month forced the evacuation of 80,000 from the Alberta tar sands town of Fort McMurray – were projected to increase over the coming decades as the climate continues to warm.

When it comes to wildfires, there is a triple effect on warming. Carbon stored in trees as well as the upper layers of soil is released back into the atmosphere during a fire. The burn also exposes the carbon-rich permafrost beneath, making it thaw more easily.

The northern US and Canada have already experienced a sharp rise in wildfires over the last few decades, with more to come.

Researchers predict a fourfold increase in northern wildfires because of warming and changes in rainfall, extending even to areas above the treeline.

The Arctic smashed through earlier heat records over this last winter – with temperatures at the North Pole hovering above zero degrees Celsius at the end of last year.

There were also shortages of snow, with organisers of the legendary Iditarod resorting to importing truckloads of white stuff for the start of the dog sled race.

The hotter and drier conditions were a recipe for more wildfires – with lightning strikes igniting more easily in drier soils and vegetation, and higher temperatures spreading the flames.

If average July temperatures top 13.4C (56.1F), there could be a big jump in wildfires in tundra regions such as Alaska’s North Slope and the Yukon-Kuskokwim Delta that were once too damp and cold to burn, the researchers found.