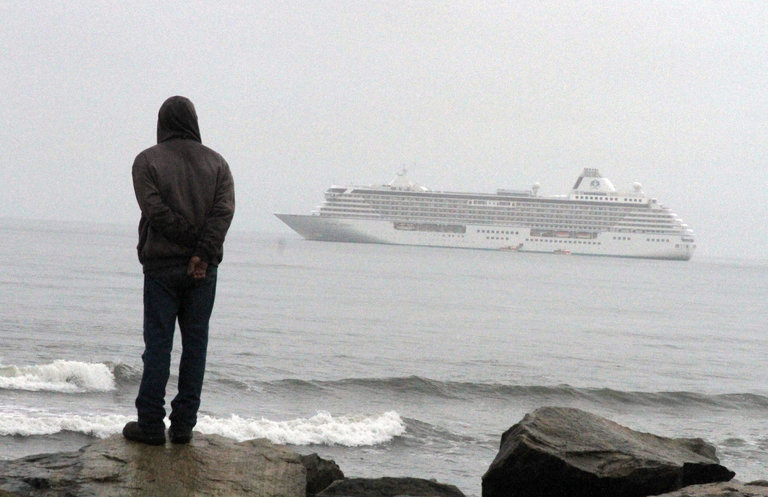 The cruise ship Crystal Serenity, anchored outside Nome, Alaska, in August, before its inaugural voyage through the Northwest Passage. The trip would not have been possible before climate change led to diminished sea ice coverage. Mark Thiessen/Associated Press

A spate of extreme warmth in the Arctic over the past two months has startled scientists, who warn that the high temperatures may lead to record-low ice coverage next summer and even more warming in a region that is already among the hardest hit by climate change...

In mid-November, parts of the Arctic were more than 35 degrees Fahrenheit warmer than observed averages, scientists said, and at the pole itself, mean temperatures for the month were 23 degrees above normal. Although conditions later cooled somewhat, the extreme warmth is expected to return, with temperatures forecast to be as much as 27 degrees above normal beginning Thursday.

Jeremy Mathis, who directs the Arctic Research Program for the National Oceanic and Atmospheric Administration said the warmth had led to a later than usual “freeze-up” of ice in the Arctic Ocean. That in turn may lead to record-low ice coverage in the spring and summer, which could lead to more warming because there will be less ice to reflect the sun’s rays and more darker, exposed ocean to absorb them.

“We’re going to be watching the summer of 2017 very closely,” Dr. Mathis said in an interview.

On Wednesday, researchers released a study linking the abnormally high Arctic temperatures to human-caused climate change. Using simulations of the climate, both current and before widespread carbon emissions, they found that the likelihood of extreme temperatures like those that occurred this fall had increased to about once every 50 years from about once every 1,000 years.

“A warm episode like the one we are currently observing is still a rare event in today’s climate,” said one of the researchers, Friederike E.L. Otto, a senior scientist at the Environmental Change Institute at the University of Oxford in Britain. “But it would have been an extremely unlikely event without anthropogenic climate change.”

What’s more, Dr. Otto said, if climate change continues at its current pace, spates of extreme Arctic warmth may become common, on the order of once every two years.

“It’s quite impressive how much the risk of these kinds of events is changing,” she said. “It’s one region where we see the impacts of climate change very strongly.”

Walt Meier, a research scientist at NASA’s Goddard Space Flight Center, said that the current warmth had been brought on by fluctuations in the jet stream, which have allowed frigid air to make its way south into North America and warm air into parts of the Arctic.

While such outbreaks of extreme warmth are not new, he said, there are many signs that climate change is making them more frequent. “We’re loading the dice to make this more likely,” he said.

While the earth over all has been warming — 2015 set a record for warmth, and 2016 is expected to exceed it — the Arctic has been warming at least twice as fast as the global average. In part, scientists say, that is because of declines in sea ice coverage. Ice typically reflects from about half to 70 percent of the solar energy that hits it, but water reflects only 6 percent, and so the water warms up. That melts more ice, which in turn leads to more exposed ocean and still more melting — what’s known as a positive feedback loop.

The recent high temperatures have had a severe impact on Arctic sea ice formation this fall. Ice coverage was the lowest for any November since satellite records began in 1979, NOAA said. Sea ice is also getting thinner on average, as thicker, multiyear ice melts and is replaced by ice that lasts only a year.

Temperatures this fall were so far off the charts that NOAA took the unusual step of extending the time frame for its annual “Arctic report card” by a few days into early December. “Because we have seen such amazing trends in the last few months, we did an addendum,” Dr. Mathis said.

The report, which includes findings from NOAA-sponsored research projects involving more than 60 scientists, was released last week at a scientific meeting in San Francisco. At a news conference, Dr. Mathis said that in addition to the extreme warm periods, the overall year was the warmest on record.

While some of the warming is attributable to the effects of El Niño, which affected weather patterns worldwide last year, those effects are on top of what is already a clear warming trend.

The NOAA review also showed that the Greenland ice sheet continued to lose mass from melting, as it has every year since 2002, when satellites began measurements. Melting began earlier this year than any previous year except 2012.

At the news conference, Dr. Mathis noted that warming effects in the Arctic have had a cascading effect through the environment, “including down into Arctic ecosystems.”

He said that communities that rely on hunting and fishing for their food security “should be very concerned.”

“It’s getting harder and harder for them to harvest resources as the ice pulls back further and further away from the coast,” he said.

But Dr. Mathis added that changing conditions in the far north should concern everyone. “We need people to know and understand that the Arctic is going to have an impact on their lives no matter where they live.”