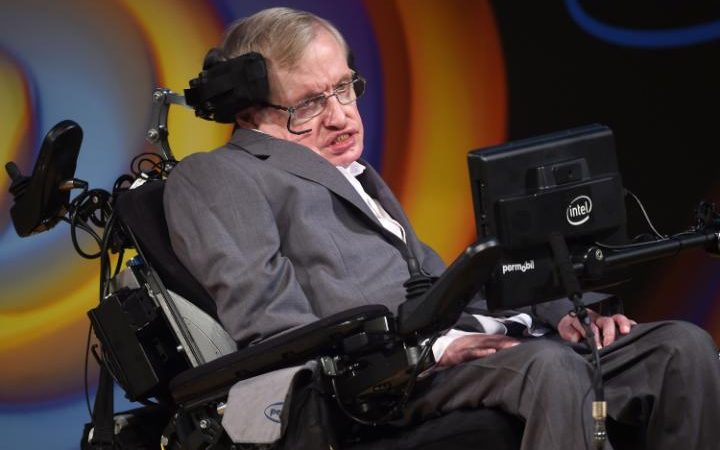 Stephen Hawking speaks about his life and work during a public symposium to mark his 75th birthday at Lady Mitchell Hall in Cambridge Credit: PA

Professor Stephen Hawking has slammed President Donald Trump's decision to withdraw the United States from the Paris climate accord and said it could lead to a "tipping point" that "turns Earth into Venus"...

Speaking to the BBC to mark his 75th birthday the author of a A Brief History of Time said: "We are close to the tipping point where global warming becomes irreversible.

"Trump's action could push the Earth over the brink, to become like Venus, with a temperature of two hundred and fifty degrees, and raining sulphuric acid."

He added: "Climate change is one of the great dangers we face and it's one we can prevent if we act now."

"By denying the evidence for climate change, and pulling out of the Paris Climate Agreement, Donald Trump will cause avoidable environmental damage to our beautiful planet, endangering the natural world, for us and our children."

Venus has a runaway greenhouse effect causing it to reach such a high temperature that lead would melt on its surface.

Professor Hawking said humans may ultimately have to leave Earth.

He told the BBC: "I fear evolution has inbuilt greed and aggression to the human genome. There is no sign of conflict lessening, and the development of militarised technology and weapons of mass destruction could make that disastrous."

"The best hope for the survival of the human race might be independent colonies in space."

On intelligence: “Intelligence is the ability to adapt to change.”