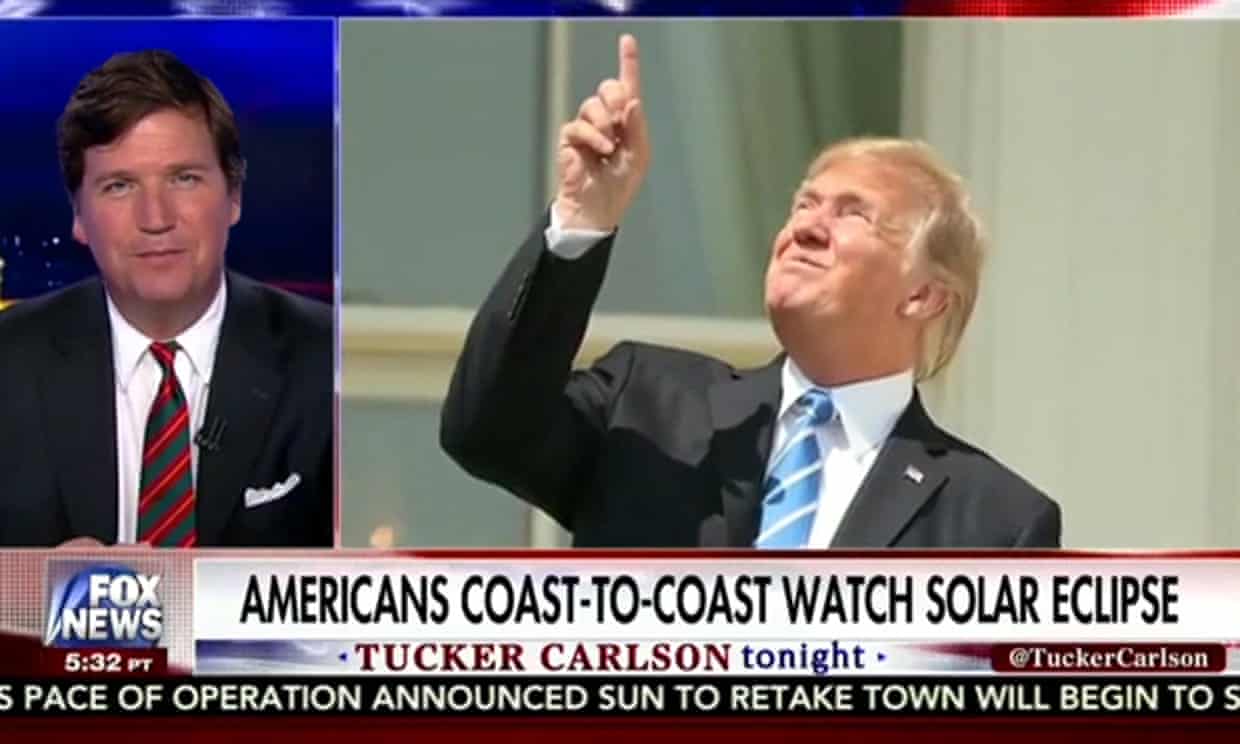 Fox News anchor Tucker Carlson was impressed with the way Donald Trump watched the solar eclipse without glasses. Carlson described it as ‘perhaps the most impressive thing any president has done’. Photograph: Fox News

The fault lies entirely with the GOP. Focus on fixing it, not laying blame where it doesn’t belong...

Steven Pinker is a cognitive psychologist, linguist, and author of Bill Gates’ two favorite books. However, his latest – Enlightenment Now – has some serious shortcomings centering on Pinker’s misperceptions about climate change polarization. Pinker falls into the trap of ‘Both Siderism,’ acknowledging the Republican Party’s science denial, but also wrongly blaming liberals for the policy stalemate, telling Ezra Klein:

there is implacable opposition to nuclear energy in much of the environmental movement ... There are organizations like Greenpeace and NRDC who are just dead set opposed to nuclear. There are also people on the left like Naomi Klein who are dead set against carbon pricing because it doesn’t punish the polluters enough ... the people that you identify who believe in a) carbon pricing and b) expansion of nuclear power, I suspect they’re a tiny minority of the people concerned with climate … What we need are polling data on how many people really would support carbon pricing and an expansion of nuclear and other low carbon energy sources.

Here Pinker has created a strange straw man that bears no resemblance to the real population of American liberals and environmentalists. In fact, the polling data he wonders about already exists.

For example, a 2016 survey by Yale and George Mason universities found that 73% of Democrats support a carbon tax or a combination of tax and regulations (a further 17% favored carbon pollution regulations only). In fact, most consider putting a price on carbon pollution the single most crucial step in tackling global warming. Even Naomi Klein has said, “I don’t think a carbon tax is a silver bullet, but I think a progressively designed carbon tax is part of a slate of policies that we need.”

While it’s true that a majority of liberals oppose building more nuclear power plants, 38% support the idea. Some environmental groups like Greenpeace do oppose nuclear power, but Pinker’s other example, NRDC merely points out that new nuclear plants are currently uneconomical, and even suggests, “The federal government should continue to fund research into nuclear energy.” There are strong economic reasons to oppose building new nuclear power as an inefficient use of resources when renewables today are cheaper and can be deployed more quickly. That being said, were nuclear power funding included in comprehensive legislation to tackle climate change, most liberals and environmentalists would accept that deal in a heartbeat.

There’s cultural pressure to place the blame on ‘both sides,’ for example by claiming that while conservatives reject science on climate change and evolution, liberals reject it on the safety of GMOs and vaccines. However, research has shown this is simply not the case – Democrats and Republicans are equally likely to distrust GMOs, and conservatives are the group that most opposes vaccines.

It’s also important to remember that the Republican Party is the only major political party in the world whose leaders reject the need to tackle climate change. And their president made America the only country to reject the Paris climate agreement. There simply is no equivalent on the political left.

In The New York Times, Nicholas Kristof pointed to research led by Yale’s Dan Kahan showing that when presented with data about a politically charged issue like gun control, the mathematical and cognitive abilities of “Democrats and Republicans alike went to pieces,” as Kristof interpreted it. But Kahan’s data showed the problem was much more pronounced among conservatives.

In the experiment, numerically-adept Democrats were about 33% more likely to misinterpret (made-up) data when it suggested that gun control increases crime, but numerically-adept Republicans were 70% more likely to misinterpret the same data when it suggested that gun control decreases crime. Democrats who are weak at math weren’t biased at all, whereas Republicans who are bad at math were 50% more likely to get the answer right when it confirmed their ideological biases. The difference between conservatives and liberals in both cases was stark.

Kristof makes a prominent reference to an experimental study that, he says, shows that “Democrats and Republicans alike went to pieces” in calculating the efficacy of a gun control measure—both groups let their partisanship get the better of them. pic.twitter.com/vGBwB4ZXeA

I tracked down this study. It wasn’t easy since Kristof’s column doesn’t link to it. Or provide the title. Or name any of the authors. Or say when it was published. The study can be found here, and its main results are in the screencap below. https://scholarsbank.uoregon.edu/xmlui/bitstream/handle/1794/22105/833.pdf … pic.twitter.com/NJTbWLB4nZ 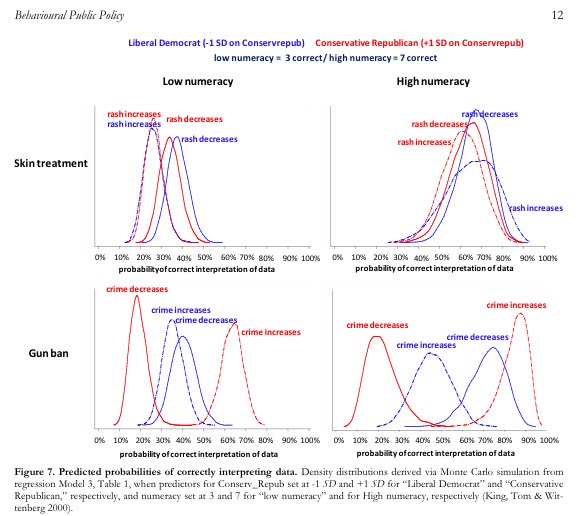 Surveys have shown that increased general science knowledge makes Democrats more likely to accept human-caused global warming – the same is not true for Republicans. Thus, it’s certainly true that ideology is preventing conservatives from accepting certain scientific realities. The problem is in the temptation to assume ‘both sides’ are equally guilty of letting ideological bias cloud their judgment. As Kahan’s research showed, some liberals are certainly guilty of this sort of bias, but it’s a far bigger problem among conservatives.

Blame the Fox Newsification of America

So how did America get here? Political polarization has been on the rise in America on both sides of the political spectrum for the past four decades. But a rating of ideology-based voting in Congress created by Kenneth Poole and Howard Rosenthal found that while Democrats are gradually becoming more liberal, Republicans in Congress have become radically more conservative since 1980.

In 1987, the FCC under Reagan repealed the Fairness Doctrine, which required television and radio stations to be equitable and balanced. The Rush Limbaugh Show then launched in 1988, and so came the rise of right-wing radio. Fox News launched in 1996, providing conservatives a source of politically-biased news coverage. Combined with conservative news websites like Breitbart, Drudge, and Infowars, the right-wing echo chamber can envelop anyone who seeks only news spun to confirm their ideological biases.

In a 2012 survey, participants who only watched Fox News were less likely to correctly answer questions about domestic or international events than viewers of any other news source (NPR, Sunday political shows, The Daily Show, talk radio, MSNBC, or CNN), or even people with no news exposure. And on the subject of climate change, the vast majority of Fox News coverage has been factually inaccurate.

Unsurprisingly, public trust in science over the past 40 years has only fallen among one group – conservatives. That aligns with research showing that watching Fox News or listening to Rush Limbaugh decreases viewer trust in scientists.

Here's how it works--the "liberal" New York Times has 3 right-wing columnists who each write 2 columns a week; the right wing Wall Street Journal has no liberal columnists. "Liberal" PBS just created a new show for conservatives, no liberals ever appear on right-wing Fox.

Focus on fixing the broken GOP

America’s climate inaction simply cannot be blamed on ‘both sides.’ Democrats have proposed cap and trade legislation – a concept invented by Republicans – to address the issue. House Democrats even passed the legislation before a lack of Republican support doomed it in the Senate. More recently, Democrats have proposed revenue-neutral climate legislation in order to appeal to small-government, free market conservatives. President Obama took America’s first comprehensive steps to tackle climate change by joining the Paris climate accords and implementing the Clean Power Plan – his Republican successor revoked both.

Quite simply, the Republican Party is the problem. Some within the party are slowly making progress in fixing it, for example in the bipartisan Climate Solutions Caucus. But breaking through America’s climate policy gridlock may require bursting the right-wing media bubble.