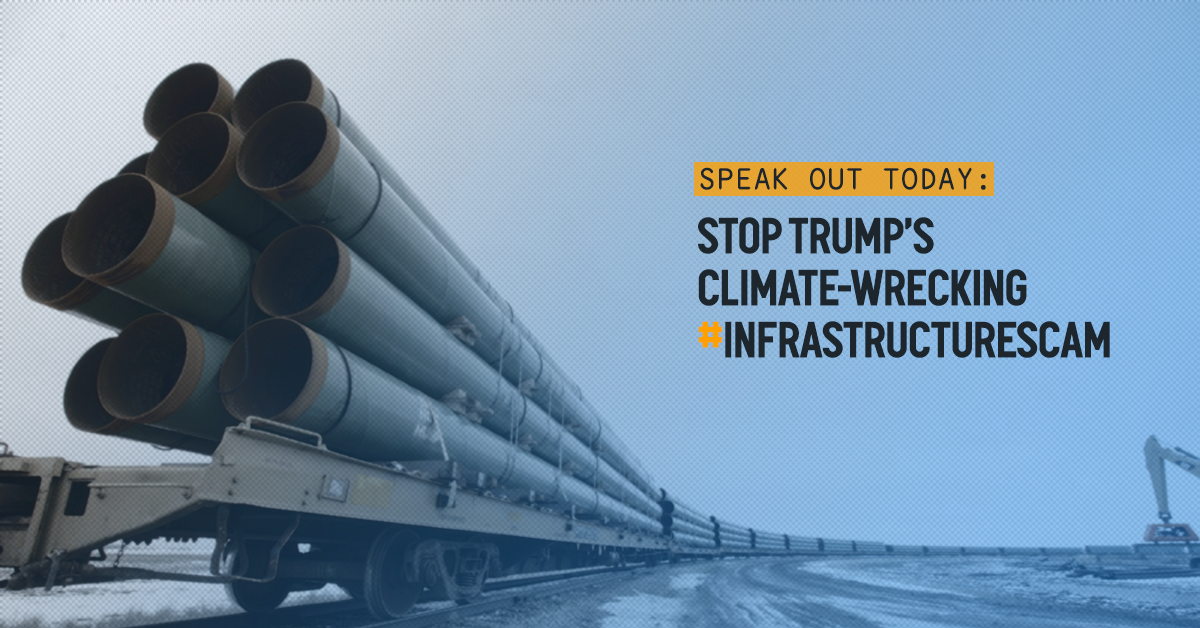 Trump’s new infrastructure plan is nothing but a climate-wrecking giveaway to big polluters and the 1%.

The proposal would fast-track fossil fuel pipelines and gut bedrock environmental protections — at the expense of frontline communities and working people...

But here’s the good news: this infrastructure scam is already facing fierce and broad opposition, both from the grassroots and from many members of Congress. If enough of us speak out now, we have a real chance of stopping this scam — and clearing the path to a just infrastructure plan that creates millions of good jobs, protects our climate and health, and works for all of us.

This Thursday, Trump’s fossil-fueled infrastructure scam is up for its first hearing in the House of Representatives. We have a real chance to stop this climate disaster from ever being signed into law -- if enough of us speak out right now.

In case you missed it, my last email, with more information about this reckless giveaway to corporations and the fossil fuel industry, is below. But here’s what you need to know now:

This “infrastructure plan” is a scam that would pad Big Oil billionaires’ pockets, open the floodgates to fossil fuel pipelines through national parks, allow oil drilling on public lands, and let industry lobbyists rewrite our laws. But there’s good news: opposition is growing stronger every day -- and if we ramp up the pressure this week, we can make a real difference.

The proposal would fast-track fossil fuel pipelines and gut bedrock environmental protections at the expense of frontline communities and working people.

But this infrastructure scam is still a long way from becoming law -- and we have a good chance of stopping it if we fight back now.

Speak out now to call on your Senators to say NO to Trump’s reckless infrastructure scam.

For Trump and his fossil-fueled cronies, “infrastructure” is short for “fossil fuel infrastructure.” We need an infrastructure deal that creates millions of jobs and helps build the 100% renewable energy-powered world we need -- but Trump’s plan is far from that as you can get.

Instead, the Trump administration handed the reins of our government over to Big Oil (again). Industry lobbyists asked for more pipelines, and that’s exactly what they got: a proposal that would trample over Indigenous rights to pave the way for a fossil fuel frenzy. The plan would even let Big Oil build pipelines through national parks.

And Trump wants to pay for this pipeline bonanza with deep cuts to essential programs like food assistance and Medicaid -- a cruel attack on America’s most vulnerable communities -- and by forcing taxpayers in cash-strapped cities and states to pick up most of the tab.

Trump’s infrastructure scam is a direct attack on our communities and our climate. Call on Sens. Heller and Cortez Masto to oppose it now.

But here’s the good news: this fossil-fueled infrastructure scam is already facing fierce and broad opposition, both from the grassroots and from many members of Congress.

People power already defeated cruel attacks on our healthcare and pushed back Trump’s racist travel bans. If enough of us speak out now, we have a real chance of stopping this scam, too -- and clearing the path toward the just, renewable energy infrastructure deal we need.

Make sure your voice is heard: call on your Senators now to stop Trump’s fossil-fueled infrastructure scam.