STOP WAITING FOR A BIG BREAKTHROUGH ON CLIMATE CHANGE. THIS IS WHAT WE’LL GET INSTEAD... 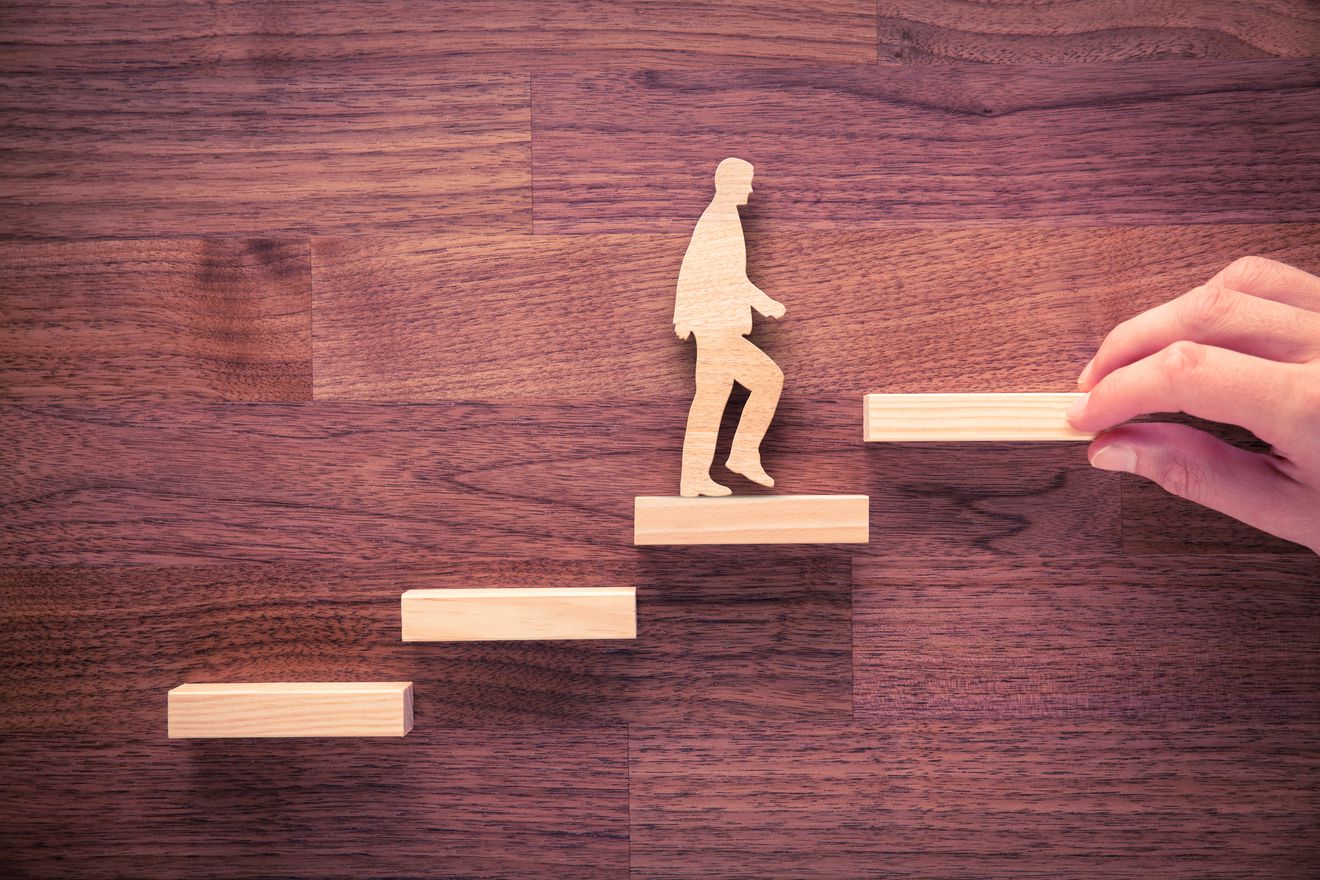 Global warming can sometimes feel like this big, hopelessly intractable problem that no one’s doing much about. But the first two weeks of October have seen a genuinely impressive barrage of climate action around the world...

CONSIDER WHAT’S GONE DOWN SO FAR:

1) Canada got a carbon tax. On October 4, Canadian Prime Minister Justin Trudeau announced his government would implement a nationwide carbon tax starting in 2018. The tax will start at $7.60 per ton of CO2 and rise to $38 per ton by 2022. Individual provinces can forgo the tax and adopt their own policies — so long as they slash emissions by an equivalent amount. While the US media focuses on Donald Trump, the Canadian press is delving into a wonky debate over carbon pricing.

2) The Paris climate deal went into effect. That same day, enough countries ratified the Paris climate agreement that it’s now officially “in force.” That means the world’s nations will start meeting regularly at the United Nations to discuss how to strengthen their individual climate pledges over time and claw toward their agreed-upon goal of keeping global warming below 2°C. Governments will also have to regularly report and review their progress on emissions to the UN.

3) A new global deal on aviation emissions. Then, on October 6, more than 190 countries agreed to offset much of the global growth in aviation emissions starting in 2020. Airlines will have to buy carbon offsets to compensate for the emissions produced by flights. This deal is far from perfect, and has some notable holes in it. But it’s the first time the International Civil Aviation Organization has started tackling the climate impact of flying — one of the fastest-growing sources of CO2.

4) A new global deal to phase out HFCs. Finally, on October 15, 197 countries agreed to phase out hydrofluorocarbons (HFCs), an incredibly potent greenhouse gas used in refrigerators and air conditioners. While this sounds obscure, it was probably the most important climate policy taken to date; by one estimate, it will prevent between 0.2°C and 0.44°C of warming by the end of the century. If ratified, this treaty will be legally binding and enforceable through trade sanctions.

Not bad for half a month! Gernot Wagner, an economist at Harvard’s School of Engineering and Applied Sciences, called it a “masterclass in climate policy.” You’ve got carbon pricing, international agreements, offsets ... all the stuff environmental wonks have been suggesting for years.

Of course, we’re still not close to stopping global warming...

Now, if you wanted to inject some pessimism here, you could point out the very real limitations of all these moves. Even added together, they don’t get us anywhere close to keeping global warming below 2°C (or 3.6°F) — the level governments all agree is unacceptable.

Nor are we yet on a trajectory to do so. If you take all the policy promises that nations proposed at Paris last year (which included reducing HFCs), they still put us on pace for 2.5°C or 3°C or more of warming. And that’s assuming countries actually hit their pledges, which they may not. Case in point: A recent study in Nature Climate Change warned that the US could miss its targets due to excess methane emissions. 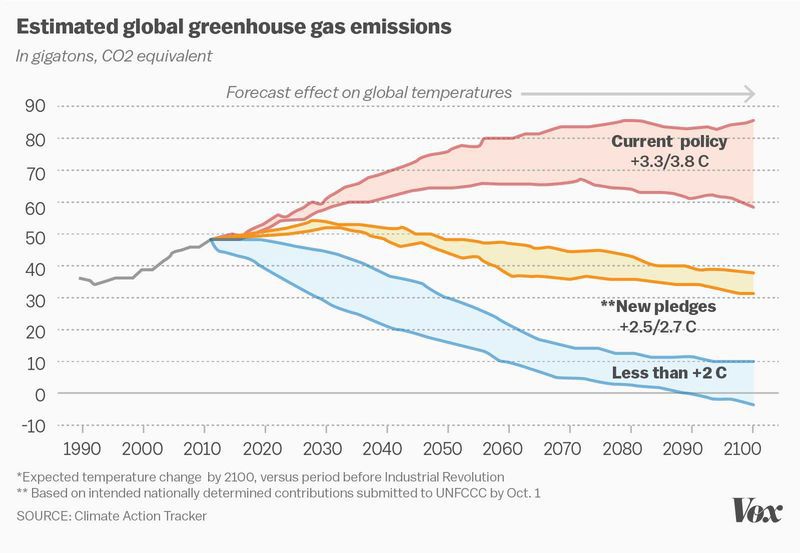 Getting serious about climate change would require more than nibbling around the edges of energy policy. Global emissions would need to start falling at unprecedented rates. Starting, like, yesterday. Every single country would have to radically increase its deployment of clean energy sources — things like solar or wind or nuclear or carbon capture for coal or electric cars or hydrogen cars — by an order of magnitude.

That’s far more difficult than anything we’ve done so far. It’s relatively simple for the world to phase out HFCs, because companies are already producing ready substitutes like HFOs. But there are no easy substitutes for fossil fuels. Replacing oil, coal, and gas requires an intricate mix technology, policy, and thorny politics. It’s the work of generations.

So we’re not there yet. But what the past two weeks show is that the world is starting to gesture meaningfully in the right direction.

A month ago, I was chatting with journalist John Fleck about his (terrific) new book on water policy in the American West, and he mentioned something that seemed deeply relevant to climate policy.

When the Western states that rely on the Colorado River first realized they were facing huge water shortages in the future, they didn’t all quickly agree on a deal that solved the entire problem at once. That was way too difficult to coordinate. So, instead, they started out by collaborating on much smaller issues, chipping away at this or that aspect of water policy, building trust over time. That enabled them to slowly work toward a bigger agreement on how best to divvy up and conserve the river’s scarce water.

“At each step, the states built this connective tissue, the institutional plumbing that allowed everyone to find ways of moving forward,” Fleck told me. “That was one of the hardest challenges of writing the book — because there’s not a clear, crisp thing you can point to that solved the problem. It’s a never-ending and ongoing process.” (Elinor Ostrom is the go-to scholar on how this collaborative process unfolds.)

If we’re going to solve global warming, it will probably look like that. There will never be one dramatic moment you can point to and say, “Aha! There’s the turning point.” Instead, countries will plug away at small issues, like HFCs, or aviation, or when to hold the next UN Paris meeting, and build momentum over time. As Johannes Urpelainen of Columbia University once put it, we’re going to have to “dream big, win small.”

Will that be enough? I honestly don’t know. As I’ve written before, I’m deeply skeptical that countries can achieve their goal of keeping global warming below 2°C. The math is too brutal, the momentum too sluggish. But that doesn’t mean it’s time to give up. Even keeping global warming at 2.5°C or 3°C is vastly preferable to 4°C or 5°C. Every additional degree means more coastal area lost to the sea, more crop failures, more deadly heat waves, more human misery. There’s always reason to push harder.