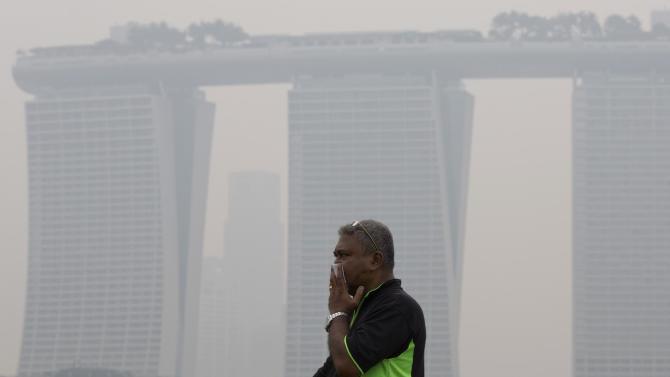 WASHINGTON (AP) — Air pollution is killing 3.3 million people a year worldwide, according to a new study that includes this surprise: Farming plays a large role in smog and soot deaths in industrial nations.

Scientists in Germany, Cyprus, Saudi Arabia and Harvard University calculated the most detailed estimates yet of the toll of air pollution, looking at what caused it. The study also projects that if trends don't change, the yearly death total will double to about 6.6 million a year by 2050.

The study, published Wednesday in the journal Nature, used health statistics and computer models. About three quarters of the deaths are from strokes and heart attacks, said lead author Jos Lelieveld at the Max Planck Institute for Chemistry in Germany.

The findings are similar to other less detailed pollution death estimates, outside experts said.

"About 6 percent of all global deaths each year occur prematurely due to exposure to ambient air pollution. This number is higher than most experts would have expected, say, 10 years ago," said Jason West, a University of North Carolina environmental sciences professor who wasn't part of the study but praised it.

With nearly 1.4 million deaths a year, China has the most air pollution fatalities, followed by India with 645,000 and Pakistan with 110,000.

The United States, with 54,905 deaths in 2010 from soot and smog, ranks seventh highest for air pollution deaths. What's unusual is that the study says that agriculture caused 16,221 of those deaths, second only to 16,929 deaths blamed on power plants. 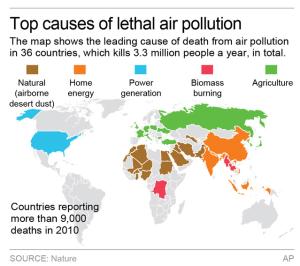 The map shows the single leading cause of death from air pollution in 36 countries.; 2c x 5 inches;  …

In the U.S. Northeast, all of Europe, Russia, Japan and South Korea, agriculture is the No. 1 cause of the soot and smog deaths, according to the study. Worldwide, agriculture is the No. 2 cause with 664,100 deaths, behind the more than 1 million deaths from in-home heating and cooking done with wood and other biofuels in developing world.

The problem with farms is ammonia from fertilizer and animal waste, Lelieveld said. That ammonia then combines with sulfates from coal-fired power plants and nitrates from car exhaust to form the soot particles that are the big air pollution killers, he said. In London, for example, the pollution from traffic takes time to be converted into soot, and then it is mixed with ammonia and transported downwind to the next city, he said.

"We were very surprised, but in the end it makes sense," Lelieveld said. He said the scientists had assumed that traffic and power plants would be the biggest cause of deadly soot and smog.

Agricultural emissions are becoming increasingly important but are not regulated, said Allen Robinson, an engineering professor at Carnegie Mellon University, who wasn't part of the study but praised it.

Ammonia air pollution from farms can be reduced "at relatively low costs," Robinson said. "Maybe this will help bring more attention to the issue."

In the central United States, the main cause of soot and smog premature deaths is power plants; in much of the West, it's traffic emissions.

Jason West and other outside scientists did dispute the study's projections that deaths would double by 2050. That's based on no change in air pollution. West and others said it's likely that some places, such as China, will dramatically cut their air pollution by 2050.

And Lelieveld said that if the world reduces a different air pollutant — carbon dioxide, the main gas causing global warming — soot and smog levels will be reduced as well, in a "win-win situation in both directions."

Air pollution could kill 6.6 million people a year by 2050 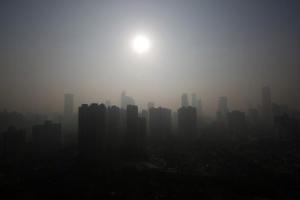 LONDON (Reuters) - Air contaminated with pollutants such as ozone and tiny particles could cause the premature death of about 6.6 million people a year by 2050 if nothing is done to improve air quality, scientists warned on Wednesday.

In a study published in the journal Nature, they found that outdoor air pollution already kills about 3.3 million people a year worldwide. The majority of those deaths are in Asia where residential energy emissions, such as those from heating and cooking, have a major impact.

And that toll could double over the next 35 years, the researchers warned, unless clean-up measures are taken.

"This is an astounding number," said Jos Lelieveld of the Max Planck Institute for Chemistry in Germany, who led the research. "In some counties air pollution is actually a leading cause of death, and in many countries it is a major issue."

Air pollution deaths are most commonly from heart disease, strokes or a lung disease called chronic obstructive pulmonary disease (COPD). It is also linked to deaths from lung cancer and acute respiratory infections.

Calculating the health and mortality effects of outdoor air pollution on a global scale is not easy, partly because air quality is not monitored in every region and the toxicity of particles varies depending on their source.

So for this study, Lelieveld's team combined a global atmospheric chemistry model with population data and health statistics to estimate the relative contribution of different kinds of outdoor air pollution, mainly from so-called fine particulate matter, to premature deaths.

Their results show that in India and China, for example, emissions from heating and cooking, have the largest death toll, while in much of the United States and a few other countries, emissions from traffic and power generation are crucial.

In the eastern United States and in Europe, Russia and East Asia, agricultural emissions are the biggest source of the kind of fine particulate matter that gets into people's lungs, causing illness, disability and death.