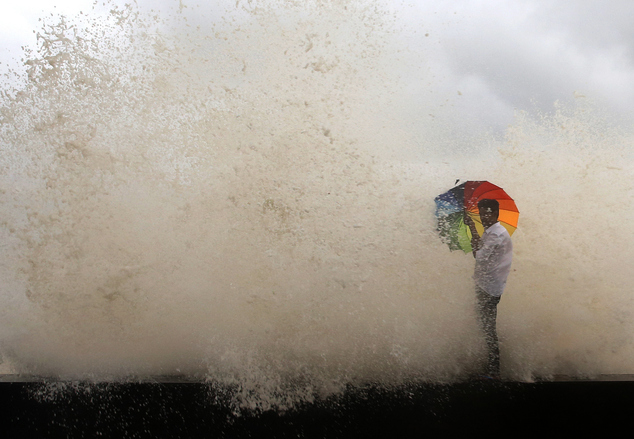 In this Wednesday, June 29 photo, a man holds an umbrella as water engulfs him during high tide on the Arabian Sea coast, in Mumbai, India. (AP Photo)

NEW DELHI (AP) — Each year as temperatures rise across India, farmers look to the sky and pray for rain...

The all-important monsoon forecast becomes a national priority, with more than 70 percent of India's 1.25 billion citizens engaged in agriculture and relying on weather predictions to decide when they will sow their seeds and harvest their crops.

But getting the forecast right remains a challenge, thanks to the complex — and still poorly understood — ways in which South Asia's monsoon rains are influenced by everything from atmospheric and ocean temperatures to air quality and global climate trends. Even the amount of ice in Antarctica is suspected to have an impact.

And it's only getting harder to figure out, scientists say, as the monsoon becomes increasingly erratic.

A new study released Friday in the journal Science Advances helps clear up a bit of the mystery, by showing that man-made climate change is responsible for most of the change seen in ocean surface temperatures near the equator across Asia, which in turn affect regional rainfall patterns including the Indian monsoon.

By showing that link, the study indicates future ocean warming in the region, which could in turn increase the amount of rainfall during monsoons, strengthen cyclones and increase precipitation over East Asia.

"This has important implications for understanding changes in rainfall patterns for a large, and vulnerable population across Asia," said oceanographer Evan Weller, who led the research team while he was at Pohang University of Science and Technology in South Korea, before recently shifting to Monash University in Australia.

The study looks specifically at a mid-oceanic body called the Indo-Pacific Warm Pool, which holds some of the world's warmest seawaters and spans the western Pacific to the eastern Indian Ocean.

Scientists have long known that India's monsoons are partly influenced by that warm pool. And they've known that the pool has been expanding — and warming — for decades. That expansion and warming have already caused some sea rise around islands in Asia.

It wasn't entirely clear why the pool was changing, until now.

Weller and his team compared data observations with several climate models, and deduced that rising greenhouse gases along with aerosols and other atmospheric pollutants were the dominant cause of the pool's warming and expansion over the past 60 years, though regional climate variations also had some effect.

"This wasn't entirely surprising. We've long suspected climate change to be behind the changes, but no one had yet proven it," Weller said. What they didn't expect was to find that the western portion of the pool, near India, was expanding more than the eastern part in the Pacific. "We don't really know why. We'll try to figure that out next."

But one thing is clear: If climate change trends continue, and by most indications they will, forecasters will have to consider the warm pool in their monsoon predictions. And by demonstrating how greenhouse gases are the dominant driver of changes in the warm pool, the team has added another dimension that can help improve climate models.

Asia, in general, could face significant consequences from this trend: more storm activity over East Asia, and stronger South Asian monsoons between June and September.

That sounds like good news for water-scarce India, but probably isn't. Most of that rain would likely fall before the monsoon front reaches land. Already, studies by the Indian Institute of Tropical Meteorology show a declining trend in precipitation over land.

Still, climate modeling is complex, and models still have their biases and limitations. Focusing so specifically on the warm pool may obscure the larger picture, some suggested, especially in the Pacific where there are many other factors at play.

"My only concern is that treating the western Pacific warm pool in isolation provides very limited insight," said climatologist Michael Mann, director of the Earth System Science Center at Pennsylvania State University. He was not involved in the study. "One has to view it as part of the larger tropical Pacific coupled ocean-atmosphere system and the dynamics of the El Nino/Southern Oscillation, and how they may change in a changing climate."

Anxious to improve its forecasting, India is investing at least $43 million through 2017 to buy more powerful computers and better technology that can help specialists make more accurate calculations and models of seasonal weather forecasts. Meanwhile, researchers from across the world are launching one study after another to better understand the many dynamics involved.

"It is not so easy to predict the monsoon," said meteorologist B.P. Yadav, a spokesman for the Indian Meteorological Department. "There is variability from region to region, time to time, and then the rains move in different stages across the land."

Indian meteorologists had announced this year's monsoon would be normal, only to watch the rains make landfall a week late in the southern state of Tamil Nadu and then stall repeatedly on their month-long progression north. At one point, officials urged farmers to wait to sow until they actually saw the raindrops falling from the sky.

But on Friday, when the monsoon was scheduled to hit New Delhi, the sky turned ochre and millions in the long-sweltering Indian capital delighted in the on-time relief of rain.