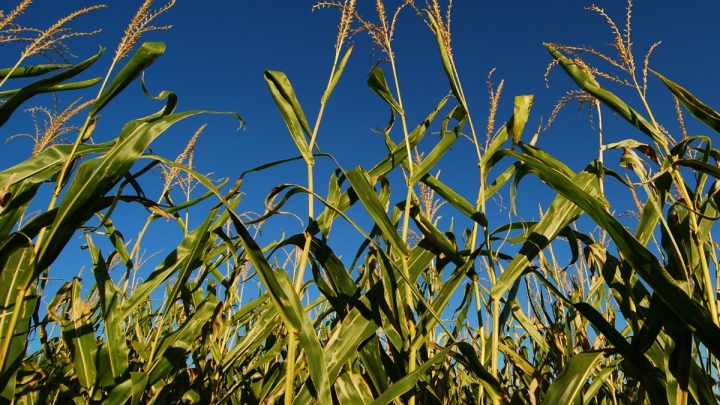 Corn is the main crop used in the U.S. to produce biofuel. Credit: Jim Deane/Flickr

Years of number crunching that had seemed to corroborate the climate benefits of American biofuels were starkly challenged in a science journal on Thursday, with a team of scientists using a new approach to conclude that the climate would be better off without them...

Based largely on comparisons of tailpipe pollution and crop growth linked to biofuels, University of Michigan Energy Institute scientists estimated that powering an American vehicle with ethanol made from corn would have caused more carbon pollution than using gasoline during the eight years studied.

Most gasoline sold in the U.S. contains some ethanol, and the findings, published in Climatic Change, were controversial. They rejected years of work by other scientists who have relied on a more traditional approach to judging climate impacts from bioenergy — an approach called life-cycle analysis.

Following the hottest month on record globally, and with temperatures nearly 2°F warmer and tides more half a foot higher than they were in the 1800s, the implications of biofuels causing more harm to the climate than good would be sweeping.

The research was financially supported by the American Petroleum Institute, which represents fossil fuel industry companies and has sued the federal government over its biofuel rules.

“I’m bluntly telling the life-cycle analysis community, ‘Your method is inappropriate,’” said professor John DeCicco, who led the work. “I evaluated to what extent have we increased the rate at which the carbon dioxide is being removed from the atmosphere?”

Lifecycle analyses assume that all carbon pollution from biofuels is eventually absorbed by growing crops. DeCicco’s analysis found that energy crops were responsible for additional plant growth that absorbed just 37 percent of biofuel pollution from 2005 to 2013, leaving most of it in the atmosphere, where it traps heat.

“The question, ‘How does the overall greenhouse gas emission impact of corn ethanol compare to that of gasoline?’ does not have a scientific answer,” DeCicco said. “What I can say definitively is that, whatever the magnitude of the emissions impact is, it is unambiguously worse than petroleum gasoline.”

The findings were criticized by scientists whose work is directly challenged by them.

Argonne National Laboratory scientist Michael Wang, who has led lifecycle analyses that found climate benefits from different biofuels, called the research “highly questionable” for a range of technical reasons, including its focus on growth by American crops instead of the global network of farms.

Driven by federal and Californian policies that promote biofuels to slow global warming, the use of ethanol, biodiesel and similar products more than trebled nationwide during the years studied, providing 6 percent of Americans’ fuel by 2013. Federal data shows gasoline sold in the U.S. last year contained about 10 percent corn ethanol.

Thursday’s paper provided fresh fuel for a heated debate among opposing groups of scientists over bioenergy’s climate impacts. Some are certain it’s a helper in the fight against climate change. Others are convinced it’s a threat.

“In the long run, there’s no question that biofuels displacing petroleum is a benefit,” said Daniel Schrag, a geology professor at Harvard who advises the EPA on bioenergy climate impacts. His views sharply oppose those of DeCicco. “It’s just a question of how long you have to wait.” 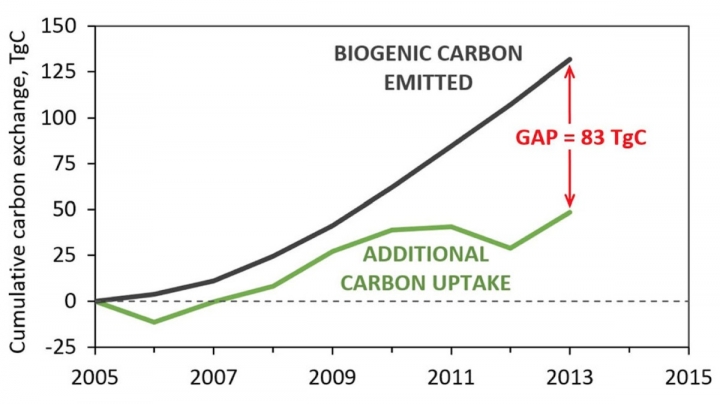 Schrag dismissed Thursday’s findings, saying there’s no reason to develop a new approach to measuring biofuels’ impacts. He said the proposed new approach fails because it doesn’t account for the years it can take for bioenergy to benefit the climate.

Analyses by scientists who have studied the life-cycle impacts of growing corn and other crops to produce ethanol have generally concluded biofuels can create between 10 percent to 50 percent less carbon dioxide pollution than gasoline.

Those estimates have been based on the notion that although bioenergy releases an initial blast of carbon dioxide pollution, the benefits of it accrue over time, as crops, trees and grass grow and suck that carbon dioxide back into their roots, flowers and leaves.

Such benefits are more conceptual than scientific, turning scientific debates at the EPA and elsewhere over how to calculate them into seemingly intractable policy quagmires.

The University of Michigan scientists dispensed with the timescale-based approach altogether, eliminating the need for policy decisions about which timeframes should be used. Instead, their research provided an overview of eight years of overall climate impacts of America’s multibillion-dollar biofuel sector.

The findings from the new approach were welcomed by Timothy Searchinger, a Princeton researcher who has been a vocal critic of bioenergy. He has been speaking out for years about the shortcomings of traditional approaches used to measure its climate impacts.

Searchinger said the approach developed in Michigan provides an “additional calculation” to help overcome the flawed assumption that climate pollution released when bioenergy burns does not matter.

Although European officials have warned of the limitations of the use of lifecycle analyses in assessing the climate impacts of bioenergy, the EPA has been steadfast for more than five years in its attempts to create a new regulatory framework that would continue to embrace the approach.

“The U.S. is not coming close to offsetting the carbon released by burning biofuels through additional crop growth,” Searchinger said.

You May Also Like:
Study Suggests Earlier Onset of Human-Driven Warming
The Future of National Parks is Going to be a Lot Hotter
In Streak of Extreme Storms, What’s the Role of Warming?