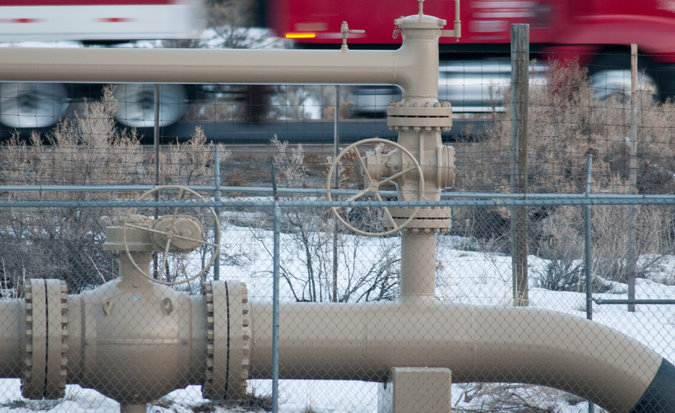 A natural gas installation in Colorado. Drilling and production can cause leaks of methane, a greenhouse gas 30 times more potent than carbon dioxide. Credit Kevin Moloney for The New York Times

WASHINGTON — The sign is ubiquitous on city buses around the country: “This bus runs on clean burning natural gas.”

But a surprising new report, to be published Friday in the journal Science, concludes that switching buses and trucks from traditional diesel fuel to natural gas could actually harm the planet’s climate...

Although burning natural gas as a transportation fuel produces 30 percent less planet-warming carbon dioxide emissions than burning diesel, the drilling and production of natural gas can lead to leaks of methane, a greenhouse gas 30 times more potent than carbon dioxide.

Those methane leaks negate the climate change benefits of using natural gas as a transportation fuel, according to the study, which was conducted by scientists at Stanford University, the Massachusetts Institute of Technology and the Department of Energy’s National Renewable Energy Laboratory.

“Switching from diesel to natural gas, that’s not a good policy from a climate perspective,” said the study’s lead author, Adam R. Brandt, an assistant professor in the department of energy resources at Stanford.

But the study does conclude that switching from coal-fired power plants — the nation’s largest source of carbon pollution — to natural gas-fired power plants will still lower planet-warming emissions over all. Natural gas emits just half the carbon pollution of coal, and even factoring in the increased pollution from methane leaks, natural gas-fired plants lead to less emissions than coal over 100 years, the study found.

The report adds weight to efforts by New York and other Northeastern states to push the federal government to regulate methane emissions. Currently, there are no federal regulations on methane emissions from oil and gas production, although some states are considering such rules.

The finding on trucks and buses is a blow to years of public policy efforts to switch the vehicles from diesel to natural gas, an effort aimed at decreasing pollution as well as America’s dependence on foreign oil.

The report’s authors conclude that the leaks can be reined in if oil and gas companies invest in technology to prevent methane from escaping into the atmosphere from gas wells and production facilities. That recommendation is in line with a petition sent by New York and other Northeastern states urging the E.P.A. to create federal methane leak regulations.

The regulations would require that oil and gas companies install equipment at wellheads to capture the leaks, use valves in production facilities that do not allow methane to escape and have regular inspections.

“This report justifies E.P.A. taking action on regulation of methane pollution and to focus that regulation on existing wells,” said Mark Brownstein, chief counsel for the American climate and energy program at the Environmental Defense Fund.

The oil and gas industry has consistently resisted new regulations. Natural gas developers say that it is in their interest to capture methane since it is a component of natural gas and can be sold as such. Allowing it to escape causes them to lose money.

“The industry has led efforts to reduce emissions of methane by developing new technologies and equipment, and these efforts are paying off,” Carlton Carroll, a spokesman for the American Petroleum Institute, which lobbies for oil and gas companies in Washington, wrote in an email. “Given that producers are voluntarily reducing methane emissions, additional regulations are not necessary.”

Friday’s report is one of a series of closely watched and sometimes hotly disputed studies on the environmental impacts of natural gas production. Natural gas producers celebrated a September report published in The Proceedings of the Natural Academies of Science that concluded that methane leaks from hydraulic fracturing sites are, on average, at or lower than levels set by the E.P.A.

However, that study also found that on some fracking rigs, valves allow methane to escape at levels 30 percent higher than those set by E.P.A. The authors of Friday’s study say that despite the good news in that report, methane appears to be leaking elsewhere in the natural gas supply, production and transportation chain. For example, the authors said, methane could be leaking from facilities where natural gas is stored, compressed or transported.