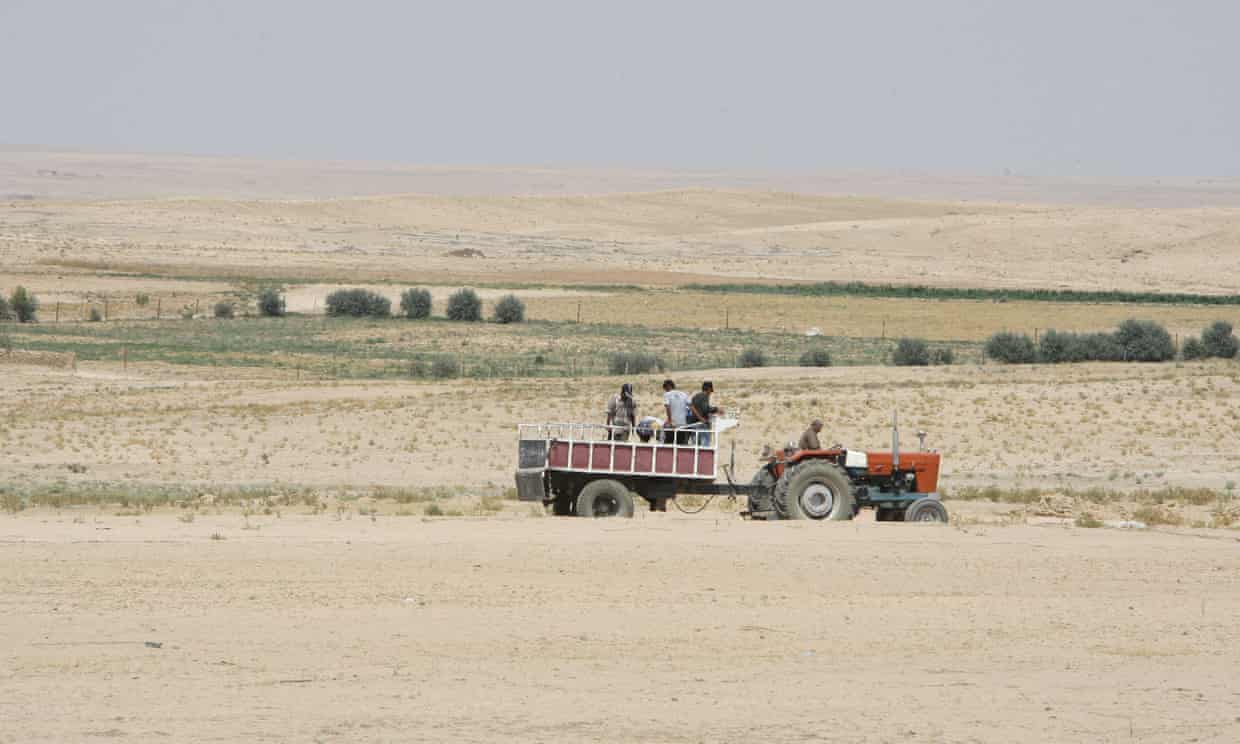 Farmers ride in their tractor in the drought-hit region of Hasaka in northeastern Syria on June 17, 2010. Photograph: Louai Beshara/AFP/Getty Images

Higher temperatures increase the number of people seeking asylum in the EU...

The refugee crisis – particularly in the Mediterranean area – has received large amounts of new attention in the past few years, with people fleeing from Syria and entering the European Union emblematic of the problem. There has been some research connecting this refugee problem with changes to the climate. In particular, the years preceding the Syrian refugee crisis were characterized by a severe drought that reduced farm output and led to economic and social strife there.

Separating out the influences of climate change from general social instability may be impossible, because they are intimately linked. But we do know that climate change can cause social and economic instability. We also know that these instabilities can boil over into larger problems that lead to mass exodus. The problem isn’t knowing the connection between climate and refugees exists – rather the problem is quantifying it.

All of this is important because we want to be able to plan for the “now” as well as the “tomorrow.” If we are already seeing climate-related migrations, can you imagine what’s in store in the next few decades as temperatures and extreme weather continue to increase?

A very recent publication appearing in the journal Science investigates this complex subject. The paper, Asylum Applications Respond to Temperature Fluctuations, was published by Anouch Missirian and Wolfram Schlenker from Columbia University. It focused not just on Syria and the Mediterranean area, but expanded their study to be worldwide.

They found that when temperatures in agricultural areas and seasons at the source countries varied away from an optimal value (of about 20°C), the number of people seeking asylum increased. And the increase wasn’t just proportional. They found it was nonlinear, meaning that initial increases in temperature only mildly changed the asylum application numbers. But as temperatures varied more and more, the number of seekers increased more quickly.

After making this connection to observations, the authors then projected into the future. Using a collection of climate models that are able to predict Earth’s future climate, the authors estimated that on a business-as-usual emissions pathway (where countries don’t meaningfully reduce greenhouse gas emissions), asylum applications will increase by almost 200% by the end of the century. On the other hand, under a modest warming scenario, where humans take some meaningful action to reduce emissions, the increase falls to about 30%. Again, this shows that what humans do today to combat climate change really matters.

What was also interesting is that temperature is a better metric for this problem than precipitation. I wouldn’t have guessed that initially; my naïve expectation would be that precipitation changes would also be very good at allowing prediction of asylum seekers. But it turns out temperature is much better. The discussion by the authors also demonstrated how many moving parts there are to this problem. Not only are the economic, climate, and social situations in the source country important, but those factors in the destination country are also critical. People migrate to where they expect better conditions.

I spoke with the authors who told me this about their choice of using temperature as the metric for asylum applications:

With much study on the topic in recent years, I wanted to know what contribution this new paper had made (that wasn’t known already). They said this:

"The significance of our paper is that we are not looking at impacts in particular countries, but spillovers in the form of asylum applications. Most economic damage assessments examine the direct impact on a country, but countries are interlinked. So even if most of the economic damages occur in developing countries, there might be repercussions for developed countries.

There is an existing literature on migration and refugees, but previous studies usually focus on one country at the time. We use data from all over the world (103 source countries that list asylum applications to the EU in every year 2000–2014) to systematically examine the relationship. We picked the European Union as destination country since it receives almost half of the asylum applications."

Readers of this column know that I study climate change – both the rate and the future projections of what will happen. But readers also know I am very interested in the studies on impacts. We’ve solved the question about how much warming is happening and who is to blame. Now, the scientific community is turning its attention to the “so what?” questions. Questions about how climate change impacts us and what can be done to stop or prepare for the changes. This paper takes us another step toward answering those questions.