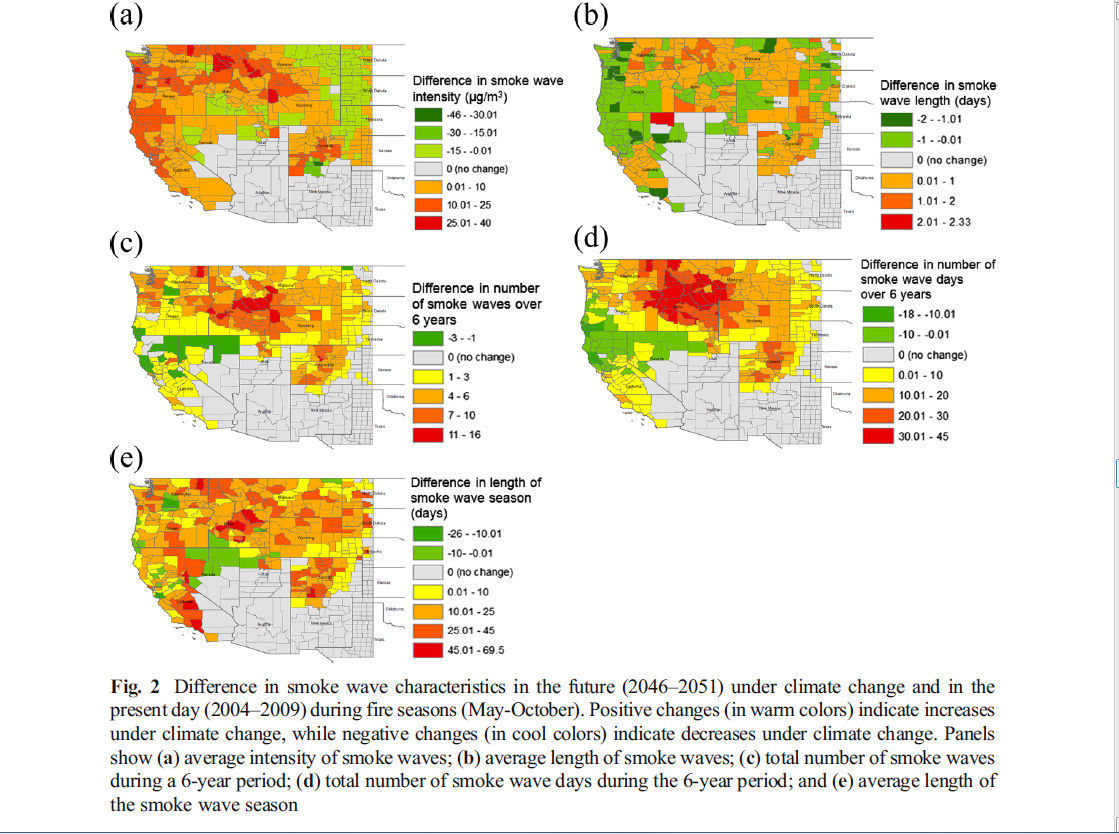 West Coast fires may be far away, but a new study from Harvard and Yale universities predicts most of the smoke they generate will flow straight to western Montana as North America warms through the coming century. The researchers suggest this adds a new health risk to the discussion of climate change.

“We’re used to talking about heat waves or sea levels rising, but this is an unexpected consequence,” said Loretta Mickley, one of the study’s authors from Harvard’s School of Engineering and Applied Sciences. “This is a conversation forest-management people need to have with health people.”

It’s a conversation Montanans have grown used to during hot summers when smoke from Idaho or Oregon fires obscures the horizon and prompts health alerts. Wildfire smoke generates lots of particulate matter 2.5 microns or less in diameter, known as PM2.5. Those particles are so small, they easily bypass most of the human body’s defenses and move directly from the lungs into the bloodstream.

To identify the highest-risk areas, the team used a fire prediction model and advanced atmospheric modeling to separate pollution caused by wildfires from other pollution sources. They also tracked the likely movement of smoke. They focused on what they called “smoke waves”– two or more consecutive days of unhealthy levels of PM2.5 from fires.

The study found that between 2004 and 2009, wildfire smoke was the source for 71 percent of the pollution on hazardous-air days.

The researchers predict those days will increase by almost two-thirds as the climate warms, and the PM2.5 levels will be 31 percent more intense. That’s going to be a problem for 82 million people, mainly in northern California, western Oregon, and the Great Plains.

The Harvard-Yale study’s conclusions mainly looked at where the largest number of affected people lived. It doesn’t highlight the fact that sparsely populated places like western Montana will move from a 3 or 4 rating on its 5-point smoke risk index to a “greatest risk” 5 by mid-century.

That's because continental wind patterns move from the Pacific Ocean in an easterly or northeasterly path. Big-fire areas like California, Oregon and Idaho send their smoke straight to Montana.

Eastern Montana, now at a 1 or 2 on the index, will shift to 3 or 4. Currently about 20 counties in the western United States fall in the Category 5 wildfire smoke risk level. That’s likely to climb to 97 counties by 2050.

Nationwide, the average length of the  smoke-wave season is forecast to grow from 14 days a year to 29. Western Montana counties, however, could see smoke-wave seasons ranging from 25 to 69 days.

“The main takeaway for me is a lack of surprise,” said Missoula County air quality technician Sarah Coefield. “A lot of smoke seems to get funneled here. The Bitterroot Valley seems to be the landing place. They have this amazing, beautiful scenery, but they also get a lot of wildfire smoke.”

The basic premise of the study was simple, Mickley explained. As the summers grow hotter and winters grow drier, the chances of large wildfires occurring grow larger. The research team compared the trends from 15 separate climate prediction models and concluded the warming trend was likely to swamp present warm-cool patterns like the El Nino/La Nina effect. The number of wildfires would follow the same upward line.

“To our knowledge, this is the first study to estimate daily ambient levels of wildfire-specific PM2.5 at the county scale across the western U.S. and to map the frequency and intensity of wildfire PM2.5 episodes (smoke waves) in the present day and in the future under climate change,” the study authors wrote. “Our study demonstrated that smoke waves are likely to be longer, more intense, and more frequent under climate change, which raises health, ecological and economic concerns.”

That could have serious health impacts but not necessarily change state policy, according to officials at Montana’s Department of Environmental Quality. Missoula County recently cured its federal non-attainment status for air quality after decades of effort removing wood-burning stoves, cleaning winter road sand, and carefully monitoring open burning in its inversion-prone airshed.

“Because wildfires are considered exceptional events, they are not anticipated to impact the day-to-day operation of other industrial sources,” DEQ air quality meteorologist Kristen Martin said in an email. Governments can’t control wildfires or where they send smoke, so they don’t count wildfire pollution against a community’s air quality standards.

But DEQ does foresee a need to better inform the public about smoke health hazards during a smoke-wave event. And the agency also hopes to see future research on ways firefighters might reduce smoke production.

“Climate change is a public health crisis, and it’s happening right now,” said Francesca Dominici, professor of biostatistics at the Harvard T.H. Chan School of Public Health and coauthor of the paper. “Asthmatic kids are going to the hospital today in California because of the smoke from wildfires. If we can figure out who is most at risk, we can start thinking about smoke evacuations and early alert systems for hospitals and local primary care physicians.”

“Organizations like Climate Smart Missoula have been putting together ideas for dealing with smoke, like finding public places with air conditioning or filtered air when it gets bad,” Coefield said. “There’s also the importance of situational awareness — we need to pay attention to how our bodies respond to smoke and not dismiss it. Even if you’re OK, your neighbor might not be.

"We’ve done pretty well this summer, so far. But there’s still a month left in that potential wildfire smoke season.”