STUDY: INSPIRING ACTION ON CLIMATE CHANGE IS MORE COMPLEX THAN YOU MIGHT THINK... 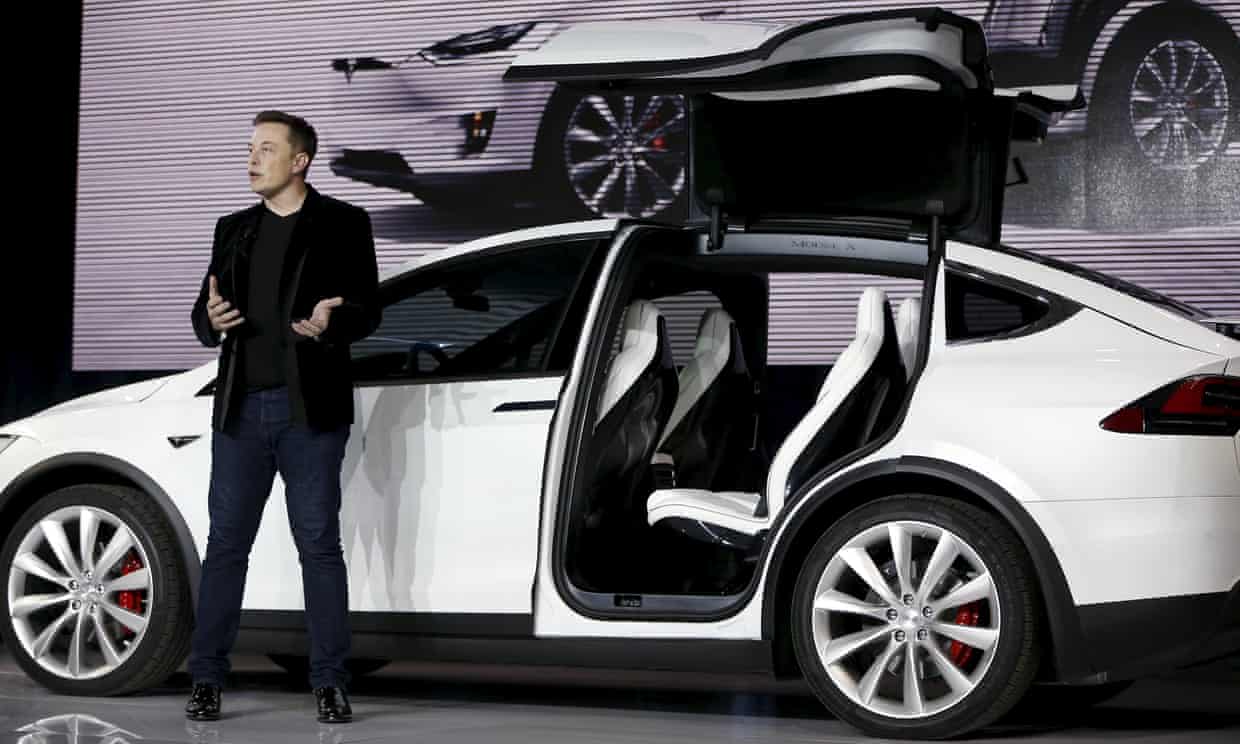 People have to grasp how climate change impacts them, and we need to value environmentally sound behavior...

We know humans are causing climate change. That is a fact that has been known for well over 100 years. We also know that there will be significant social and economic costs from the effects. In fact, the effects are already appearing in the form of more extreme weather, rising sea levels, ocean acidification, and so on.

So why haven’t humans done much about the problem? Answering that question may be more challenging than the basic science of a changing climate. Fortunately, a new review just out in Science helps us with this question. Lead author, Dr. Elise Amel, a colleague of mine, completed the review with colleagues Drs. Christie Manning, Britain Scott, and Susan Koger. Rather than focusing solely on the problems with communicating the science of climate change, this work takes a wider view on the hurdles that get in the way of meaningful action.

The review points out that since the 1970s, extensive efforts to educate people have not lead to significant shifts in behavior. They also acknowledge that using fear or guilt has not been effective in getting people to act. So, what can help?

Well, first we must understand that it is not just internal forces (emotions, beliefs, attitudes, etc.) that affect human behavior, but external influences as well. External factors, like social networks, societal roles, cultural worldviews, habits, infrastructure, investments, etc, are often severely underestimated in the extent to which they steer behavior. One fault of prior messaging is an almost exclusive focus of the first (internal) set of factors and a near-complete neglect of the latter (externals). The authors write:

Change is hard. Human beings are reticent to change their behavior even under the most compelling of circumstances, and environmental dangers do not tend to arouse the kind of urgency that motivates individuals to act. Mass transformation of unsustainable systems will be even more difficult than shifting individual behaviors, for unlike ants and bees, humans are not well equipped to coordinate behavior for common benefit.

Here is really the center of the problem, the social dilemma wherein it is in the collective’s interest to act in one way but individuals may benefit personally if they act in another way.

This struggle for humans to manage our impact on climate is made more complex by the unique issue of climate change; it is a long-term problem that has no apparent immediate and personal threats. Simply put, we need to take actions now to avoid problems later on even though we personally may not experience these consequences.

To counter this disconnect, climate change discussions need to be framed as matters related to current impacts at the local level. It is great that we want to save polar bears, but what really will motivate people are the risks to them right now. Fortunately or unfortunately, depending on your viewpoint, it is becoming easier and easier to make these connections. Examples abound for instance terrible flooding in the central USA, the record drought in California, recent heat waves in central Asia, or in Australia, as just some examples.

The authors identify a variety of strategies for moving forward with human limitations in mind. Since they acknowledge humans tend not to protect those things they either don’t know or don’t value, ingraining a sense of value in the natural world may be critical. In fact, there is a strong relationship between an individual’s connection to nature and their ecological behavior. In today’s world of growing industrialization and severing of the nature/human connection, the challenge may be to find and create new connection opportunities. 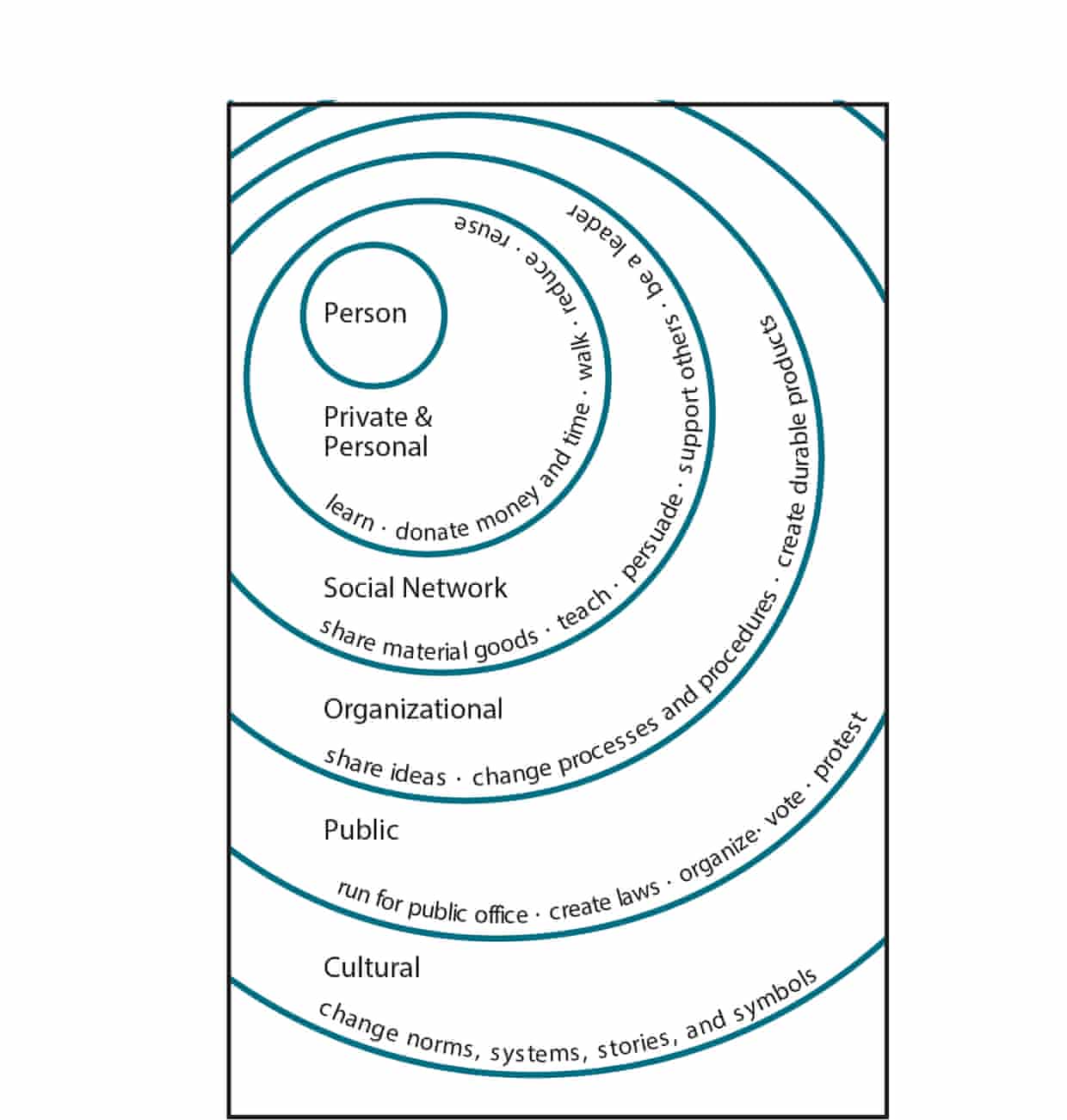 In fact, individuals play a critical role in inspiring collective actions within various spheres of influence (see the above figure), which is the kind of behavior needed to change the enormous systems - food, transportation, retail, etc. - disproportionately impacting the planet. The review highlights how transformational individuals - those who decide to step outside of accepted social norms - can bring about large-scale change in their social networks and within the organizations of which they are a part. While it feels incredibly awkward to do something different than the norm, we are all capable of it. And, it’s easier if we don’t have to do it alone, so supporting others who take a stand is a crucial role we can all play.

I think the summary of the paper does a great job encapsulating the work’s important lessons. The authors write:

Psychological research suggests that humans can move toward a sustainable society by creating conditions that motivate environmentally responsible collective action – conditions that help people surmount cognitive limits, create new situational drivers, foster need fulfillment, and support communities of social change. Individuals whose actions are informed by a deeper understanding of how the planet really works can galvanize collectives to change the larger systems that drive so much of human behavior. To radically alter the way humans think and live; educate the next generation; and design physical, governmental, and cultural systems, humans must experience and better understand their profound interdependence with the planet.

And this is where the important research is going. Physical scientists have shown without any remaining doubt that humans are causing climate change. There are no reputable scientists that would disagree. So now that the physical science battle has been won, it is time to move on to hearts and minds. We need both individual and collective change. If we are smart, we can not only save the planet but we can develop a rich relationship with the world and our neighbors and save the future of our species.