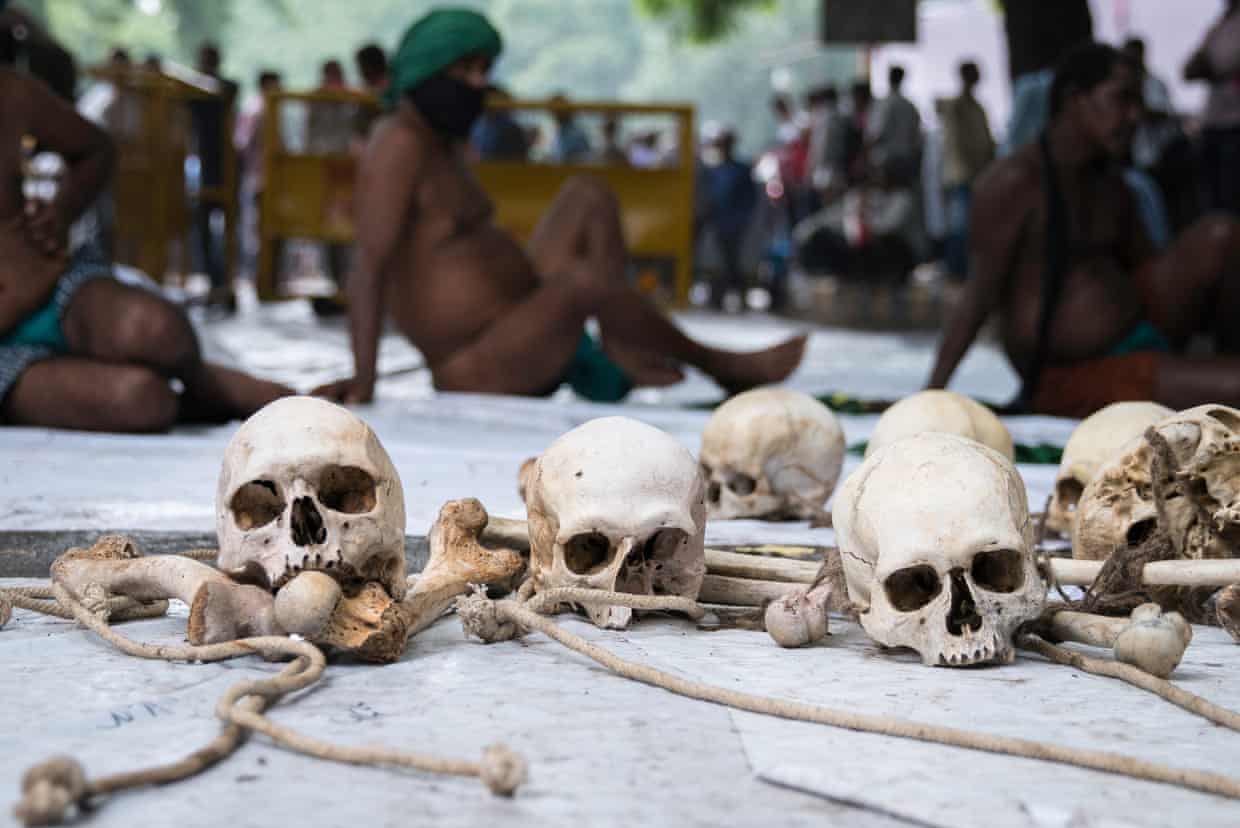 Farmers from Tami Nadu demonstrate in Delhi with what they say are the bones of farmers who committed suicide because of a crippling drought and high debt. Photograph: Julian Chung for the Guardian

Rising temperatures and the resultant stress on India’s agricultural sector may have contributed to increase in suicides over the past 30 years, research shows...

Climate change may have contributed to the suicides of nearly 60,000 Indian farmers and farm workers over the past three decades, according to new research that examines the toll rising temperatures are already taking on vulnerable societies.

Illustrating the extreme sensitivity of the Indian agricultural industry to spikes in temperature, the study from the University of California, Berkeley, found an increase of just 1C on an average day during the growing season was associated with 67 more suicides. 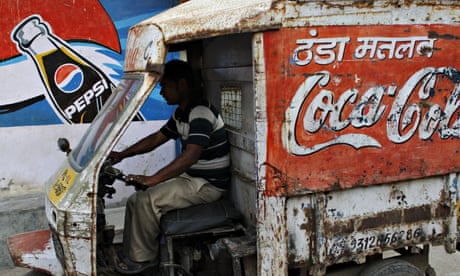 An increase of 5C on any one day was associated with an additional 335 deaths, the study published in the journal PNAS on Monday found. In total, it estimates that 59,300 agricultural sector suicides over the past 30 years could be attributed to warming.

Temperature increases outside the growing season showed no significant impact on suicide rates, suggesting stress on the agriculture industry was the source of the increase in suicides.

Also supporting the theory was that rainfall increases of as little as 1cm each year were associated with an average 7% drop in the suicide rate. So beneficial was the strong rainfall that suicide rates were lower for the two years that followed, researcher Tamma Carleton found.

Farm sector suicides in India decreased last year, but remain at epidemic levels in some states and are a source of immense pressure on legislators.

One drought-hit state, Maharashtra, reported 852 farmer suicides in the first four months of this year, while in 2015, one of the worst years on record, about 12,602 farmers killed themselves across India. Overall, more than 300,000 farmers and farm workers have killed themselves in the country since 1995.

In recent months, a site in central Delhi has been strewn with evidence of the despair felt by the Indian agricultural sector.

Skulls and bones said to belong to farmers who killed themselves have been piled at Jantar Mantar, within walking distance of the Indian parliament.

They were brought to Delhi by farmers from Tamil Nadu, a state suffering its worst drought in 140 years, which the protesters claim has triggered hundreds of suicides in the past months.

Worse than the parched crops were the bank loans that loomed over many farming families, said Rani Radhakrishnan, one of the protesters.

In February, owing 80,000 rupees (£945), her husband stood outside his bank branch in the city of Trichy, and consumed a toxic concoction. He died on the spot. 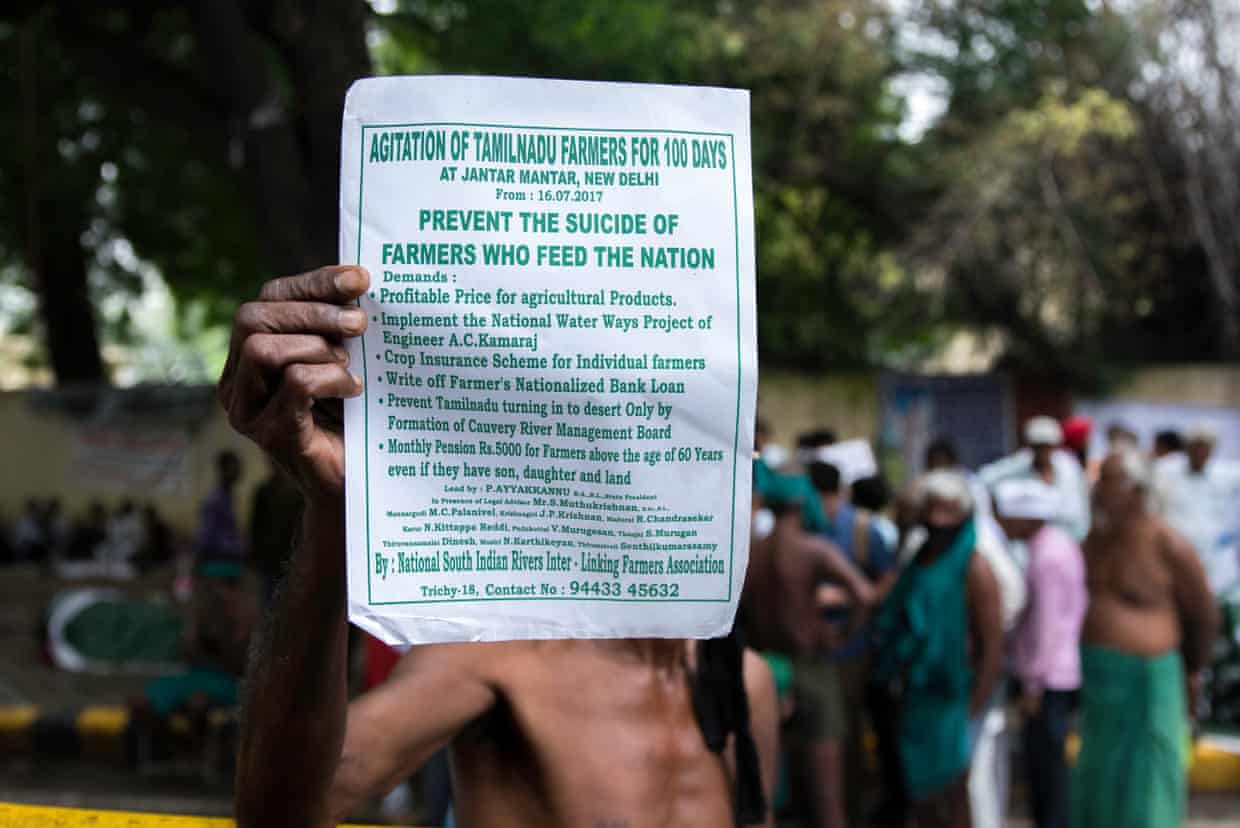 Tamil Nadu is suffering its worst drought in 140. Protestors claim it has triggered hundreds of suicides. Photograph: Julian Chung for the Guardian

“He had talked about things like this [suicide] happening with others, but never about doing it himself,” she said.

The next week, Radhakrishnan and her daughter-in-law stood outside the bank brandishing wads of rupees. “We told them, we have repaid your money, now will you give us back my husband’s life?” she said.

Maharashtra, Punjab and the country’s most populous state, Uttar Pradesh, have all passed farm-debt waivers at enormous cost to the public purse to appease the demands of the agricultural sector, which commands strong political sway.

“Without interventions that help families adapt to a warmer climate, it’s likely we will see a rising number of lives lost to suicide as climate change worsens in India,” Carleton said.

The true suicide rate was probably higher, she added, because deaths are generally underreported in India and, until 2014, suicide was considered a criminal offence, discouraging honest reports.

“The tragedy is unfolding today,” she said. “This is not a problem for future generations. This is our problem, right now.”