Nock-ten has made landfall on the Philippines on Christmas Day.

The capital city of Manila is in the path of this dangerous storm.

Super Typhoon Nock-ten rapidly intensified through Christmas Eve and has now made landfall on the Philippines on Christmas Day. This dangerous storm will hammer that country into Monday, bringing destructive winds, massive storm surge flooding and torrential rainfall.

Tropical storms and hurricanes are almost never a Christmas concern in the Atlantic basin but can happen year-round in the northwest Pacific Ocean.

The highest cloud tops, corresponding to the most vigorous convection, are shown in the dark red and pink colors. Clustering, deep convection around the center is a sign of a healthy tropical cyclone.

Known in the Philippine area of responsibility as "Nina," this typhoon moved over a favorable environment for strengthening, where vertical wind shear was low and sea-surface temperatures were very warm.

Steered generally toward the west-northwest by high pressure to its north, Nock-ten/Nina first made landfall on Catanduanes Island on Christmas Day as the equivalent of a Category 4 hurricane on the Saffir-Simpson Hurricane Wind Scale, with winds of 155 mph. 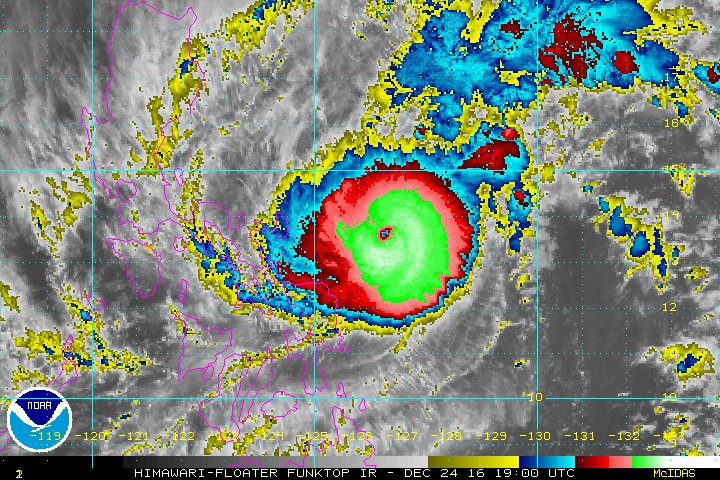 Destructive winds, storm-surge flooding and heavy rainfall are expected in Bicol with the nearest approach of Nock-ten/Nina. Whether the region gets the strongest winds from the typhoon depends on the exact path of the eyewall. The slightest shift of just a few miles can make a world of difference.

Shaded winds are likely higher than shown here due to low resolution.

The typhoon will then continue into Luzon by Monday, local time, including the heavily-populated capital of Manila. Nock-ten/Nina is expected to weaken a bit by the time of its Luzon landfall, due to its circulation interacting with land in the Bicol region.

Despite that, some wind damage, coastal flooding (mainly in eastern Luzon) and flooding rain are expected with the passage of Nock-ten/Nina Monday in Luzon. Typhoon-force winds are possible in the city of Manila on Monday, local time.

Many areas of the northern Philippines along the path of Nock-ten/Nina are expected to see more than 3 inches of rainfall, with more than 10 inches locally, especially over higher terrain, leading to dangerous flooding and mud/rockslides.

After weakening as it moves through the Philippines, Nock-ten is not expected to re-curve northwestward due to the strong northeast monsoon flow over the South China Sea ingesting cooler and drier air.

The last tropical cyclone to impact the Philippines was Tropical Storm Tokage, locally known as Marce, in late November.

Nock-ten is expected to track farther south than Haima, but given the densely populated area that could be affected by this storm, significant impacts are possible.

In addition, Nock-ten is one of the strongest tropical cyclones in the northwest Pacific so late in the year. Typhoon season runs year-round. 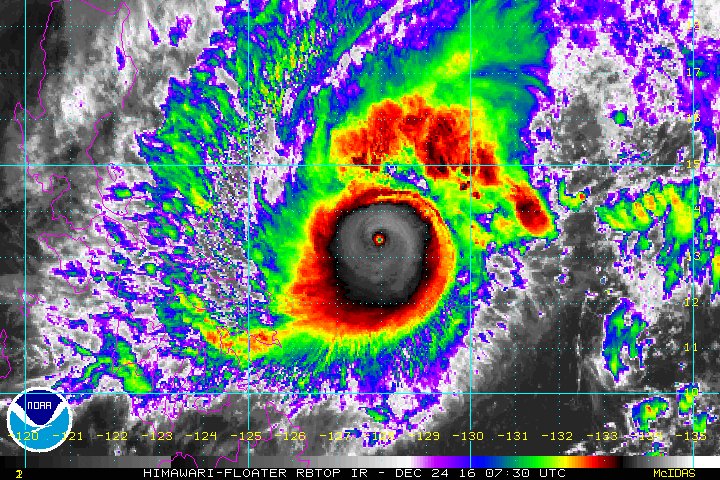 #Nockten has intensified into a supertyphoon with 150 mph winds - the strongest NW Pacific TC this late in the season since Susan (1963).

By Linda Lam and Jon Erdman
Published Dec 25 2016 11:35 AM EST
weather.com
source: https://weather.com/
original story HERE
If you would like to share this blog story on Facebook with one easy click, scroll down to the very bottom of this page and look for the SHARE button along with the Facebook LIKE button under the "Sign up to Learn About & Help End Global Warming" area where people enter their email address. You do not need to enter any email address to use the one click SHARE button.
Get more of The Global Warming Blog. Bookmark this page and signup for the blog’s free RSS Feed. Sign up for free Global Warming Blog by clicking here. You will automatically be emailed a regular summary of the latest global warming headlines.
To learn about more about global warming, climate change or greenhouse gases as well as the causes, consequences, solutions, definitions, facts and tipping points related to these subjects, click here.
To see our most current positions, opinions, comments, agreement or disagreement with this article, and/or possible criticisms related to the subjects or facts raised in the above article, click here.  Then look for those subjects in the navigation links at the top the page.
To sign a critical petition for declaring an international global warming State of Emergency, click  here!