SYDNEY HIT BY WILD WEATHER FROM NORTH TO SOUTH, EAST TO WEST... A severe weather warning remains in place for much of NSW, with parts of the city receiving more than 200mm of rain in the previous 48 hours. Weatherzone meteorologist Brett Dutschke said that Sydney has experienced its "most intense" wind, rain and surf since April last year...

The system is expected to move slowly south throughout the day, bringing the heaviest rainfall and most intense winds towards Illawarra and the South Coast.

The east coast lows have produced "unusually strong" winds blowing in from a north-easterly direction, causing destruction across the state.

"Trees which may have previously withstood stronger winds from the south may have toppled with the wind blowing in this direction," Mr Dutschke said. Motorists have been urged to avoid driving on flooded roads as the storm continues across the state. Photo: James Alcock

Highest rainfall: Terrey Hills received 151mm of rain in the 48 hours to 11am on Sunday.

Residents have been evacuated from the North Narrabeen Caravan Park and students from the nearby Sydney Academy of Sport and Recreation. Severe weather has lashed much of NSW this weekend.  Photo: Peter Rae

Police say students from the sports academy on the flood prone Wakehurst Parkway have been sent to the Narrabeen Surf Club due to fears Narrabeen Lake will flood.

Motorists have been urged to avoid driving on flooded roads with conditions expected to worsen in the area.

The storm appears to have caused significant erosion at Narrabeen-Collaroy beach. Houses at Collaroy have lost about five metres of their front yards in the past 48 hours. 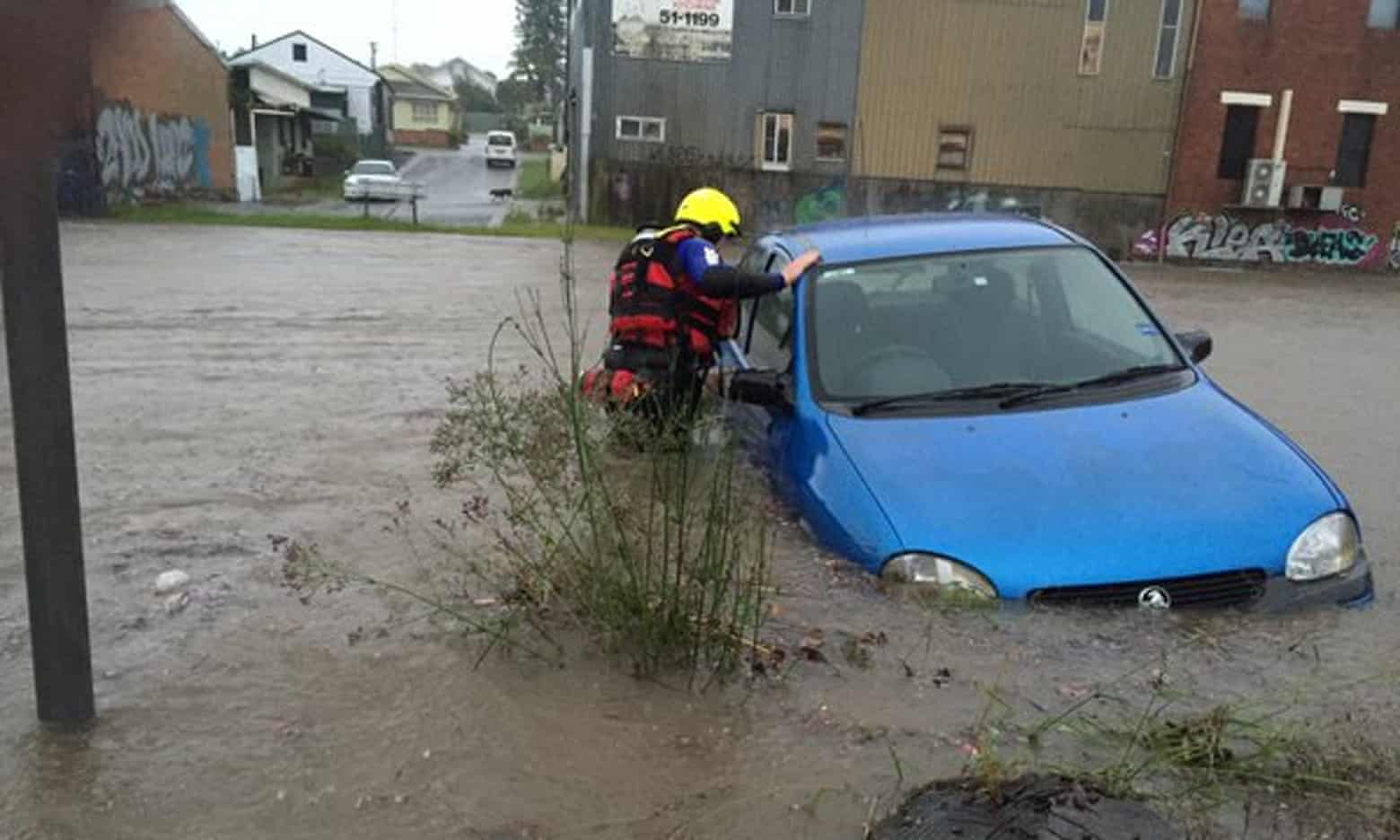 The historic stone bridge over Tunks Park at Northbridge flooded to axle-depth on Sunday morning.

Highest Rainfall: Sydney Airport recorded 177mm of rain in the 48 hours to 11am on Sunday.

The area will continue to bear the worst of the weather as the system moves southwards during Sunday and Monday.

Minor to moderate flooding is expected along the Georges River and minor flooding will affect the Woronora River.

The NSW SES cannot predict the flood peak but is asking residents to be on alert for flooding in the area.

Tempe residents have been warned of possible minor flooding around the Cooks River on Sunday evening.

More heavy rain is forecast for the next six hours and a high tide at 8.30pm may cause flooding at Tempe Bridge, the Bureau of Meteorology has warned.

Heaviest Rainfall: Sydney's CBD has been soaked, with Sydney's Observatory Hill receiving 166mm of rain in a 48-hour period.

Winds have reached up to 117km/h on the Sydney Harbour, its worst in three years, Weatherzone said.

Trees and powerlines are down in Queens Park, with similar damage noted across Double Bay and Paddington.

Damaging surf continues to thrash the eastern beaches due to abnormally high tides and damaging surf, the Bureau of Meteorology said.

The swells have reached up to six metres off the coast, and are expected to increase leading up to the high tide at 8.30pm on Sunday.

Highest rainfall: Ingleburn has been Sydney's "standout wet suburb", receiving a whopping 217mm of rain in the past 48 hours to 11am on Sunday, Weatherzone said.

Bankstown has had its heaviest rainfall in more than 15 years, receiving 174mm of rain.

Moderate flooding in the Nepean River at Menagle and minor flooding at Camden and Wallacia is expected as heavy rain continues to fall.

The Bureau of Meteorology has warned at least another 100-150mm of rain is forecast for the Nepean, Wollondillly and Hawkesbury River valleys in the next 12 hours.

Earlier on Sunday morning, the roof was torn off the Burwood PCYC building on Deane Street as winds of up to 125km/h continued to pummel the state's east coast.

The damaging winds and heavy rainfall are expected to continue all day before easing noticeably in the evening, Weatherzone said.

original story HERE
To see our most current positions, opinions, comments, agreement or disagreement with this article, and/or possible criticisms related to the subjects or facts raised in the above article, click here.  Then look for those subjects in the navigation links at the top the page. To learn about more about global warming, climate change or greenhouse gases as well as the causes, consequences, solutions, definitions, facts and tipping points related to these subjects, click here.
To automatically be emailed a summary of the latest news on global warming, sign up for our Global Warming Blog by clicking here. (Put your email address in the Global Warming Blog Subscribe box at the bottom right of the page.)
To sign a critical petition for declaring a national and international global warming State of Emergency, click  here!