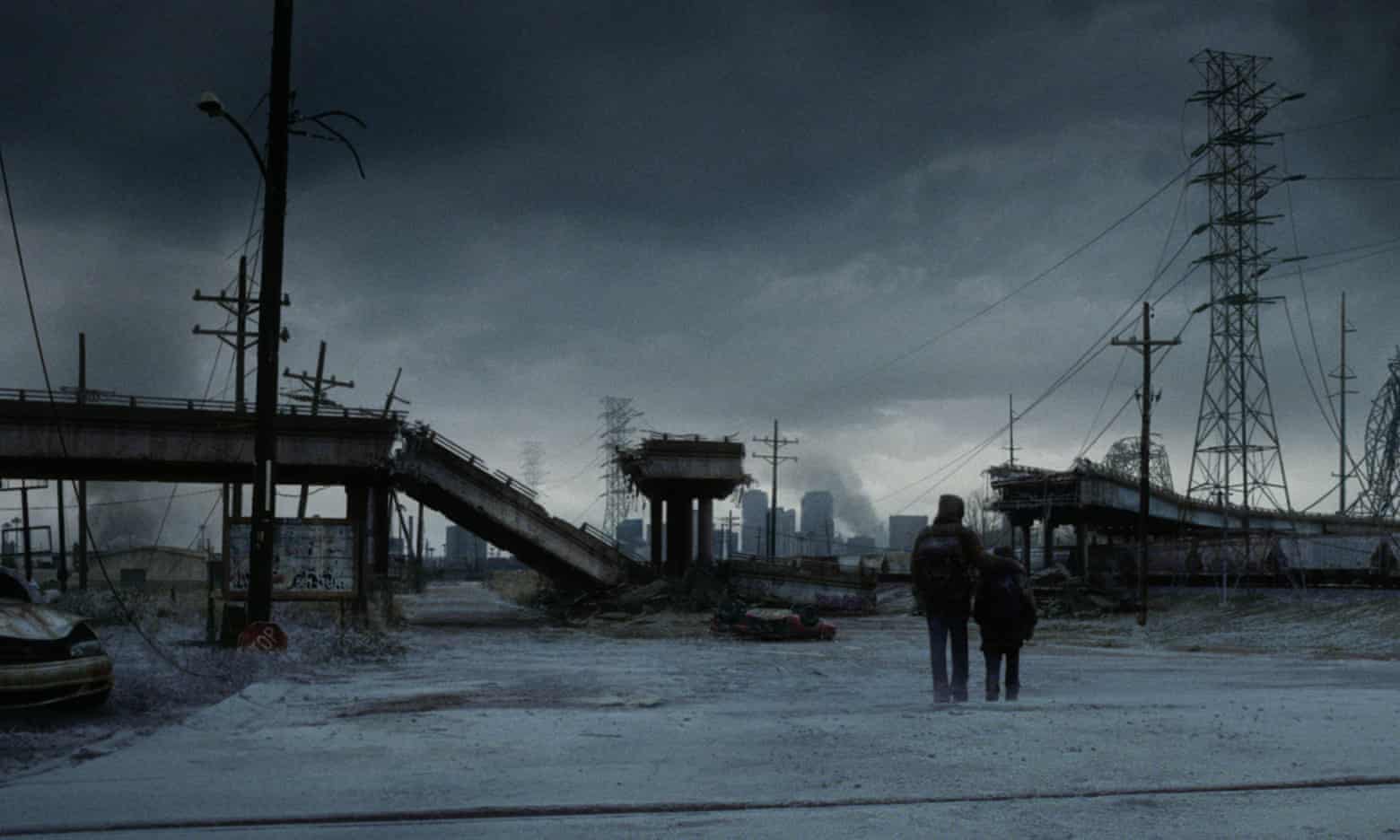 Viggo Mortensen as The Man and Kodi Smit-McPhee as The Boy in the 2009 film The Road. Photograph: Dimension Films/Supplied by LMK

From Trump to climate change, this multiheaded crisis presages collapse. And there’s no hope of exiting the ‘other side’ if political alternatives are shut down...

Please don’t read this unless you are feeling strong. This is a list of 13 major crises that, I believe, confront us. There may be more. Please feel free to add to it or to knock it down. I’m sorry to say that it’s not happy reading.

The next occupant of the White House will be a man who appears to possess no capacity for restraint, balance or empathy, but a bottomless capacity for revenge and vindictiveness. He has been granted a clean sweep of power, with both houses and the supreme court in his pocket. He is surrounding himself with people whose judgment and knowledge of the world are, to say the least, limited. He will take charge of the world’s biggest nuclear and conventional arsenals, and the most extensive surveillance and security apparatus any state has ever developed.

In making strategic military decisions, he has a free hand, with the capacity to act even without the nominal constraint of Congress. His national security adviser, Michael T Flynn, is a dangerous extremist.

Trump booed as he leaves the New York Times office

Trump’s team is partly composed of professional lobbyists hired by fossil fuel, tobacco, chemical and finance companies and assorted billionaires. Their primary political effort is to avoid regulation and taxation. These people – or rather the interests they represent – are now in charge. Aside from the implications for the living world, public health, public finance and financial stability, this is a vindication of the political model pioneered by the tobacco companies in the 1960s. It demonstrates that if you spend enough money setting up thinktanks, academic posts and fake grassroots movements, and work with the corporate media to give them a platform, you can buy all the politics you need. Democracy becomes a dead letter. Political alternatives are shut down.

Meanwhile, on this side of the Atlantic, Britain’s attempts to disentangle itself from the European Union are confronted with a level of complexity that may be insuperable. Moreover, there may be no answer to the political fix in which the government finds itself. This is as follows: a) either it agrees to the free movement of people in exchange for access to the single market, in which case the pro-Brexit camp will have gained nothing except massive embarrassment, or b) the EU slams the shutters down. Not only is it likely to reject the terms the government proposes; but it might also try to impose an exit bill of about €60 billion for the costs incurred by our withdrawal. This would be politically impossible for the government to pay, leading to a non-negotiated rupture and the hardest imaginable Brexit.

The Italian banking crisis looks big. What impact this might have on the survival of the eurozone is anyone’s guess.

6. … and their global ramifications

Whether it is also sufficient to trigger another global financial crisis is again hard to judge. If such a thing were to occur, governments would not be able to mount a rescue plan of the kind they used in 2007-8. The coffers are empty.

Automation will destroy jobs on an unprecedented scale, and because the penetration of information technology into every part of the economy is not a passing phase but an escalating trend, it is hard to see how this employment will be replaced. No government or major political party anywhere shows any sign of comprehending the scale of this issue.

Marine Le Pen has a moderate to fair chance of becoming the French president in May. Whether this would be sufficient to trigger the collapse of the EU is another unknown. If this is not a sufficient crisis, there are several others lining up (especially the growing nationalist movements across central and eastern Europe in particular, but to a lesser extent almost everywhere) that could catalyse a chain reaction. I believe that when this begins, it will happen with a speed that will take almost everyone by surprise. From one month to the next, the EU could cease to exist.

If Le Pen wins, the permanent members of the UN security council will be represented by the following people: Donald Trump, Vladimir Putin, Xi Jinping, Theresa May and Marine Le Pen. It would be a stretch to call that reassuring.

National climate change programmes bear no connection to the commitments governments made at Paris. Even if these programmes are fully implemented (they won’t be), they set us on a climate-change trajectory way beyond that envisaged by the agreement. And this is before we know what Trump will do.

11. … and the effects on migration

One of the many impacts of climate breakdown – aside from such minor matters as the inundation of cities, the loss of food production and curtailment of water supplies – will be the mass movement of people, to an extent that dwarfs current migration. The humanitarian, political and military implications are off the scale.

According to the UN food and agriculture organisation, at current rates of soil loss we have 60 years of harvests left.

The extinction crisis appears, if anything, to be accelerating.

Enough already? Sorry, no. One of the peculiarities of this complex, multiheaded crisis is that there appears to be no “other side” on to which we might emerge. It is hard to imagine a realistic scenario in which governments lose the capacity for total surveillance and drone strikes; in which billionaires forget how to manipulate public opinion; in which a broken EU reconvenes; in which climate breakdown unhappens, species return from extinction and the soil comes back to the land. These are not momentary crises, but appear to presage permanent collapse.

So the key question is not how we weather them but how – if this is possible – we avert them. Can it be done? If so what would it take?

I write this not to depress you, though I know it will have that effect, but to concentrate our minds on the scale of the task.