THE 2017 PACIFIC TYPHOON SEASON SAVES ITS WORST FOR LAST: 240 KILLED IN THE PHILIPPINES... 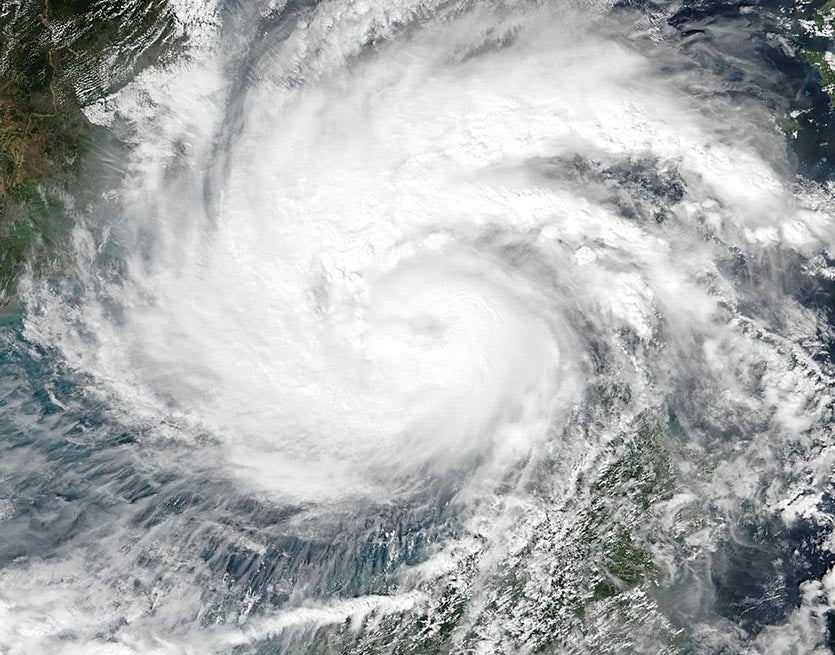 Typhoon Tembin at peak intensity over the South China Sea at 0550 UTC December 24, 2017. At the time, Tembin was a Category 1 storm with 90 mph winds. Image credit: NASA.

The relatively inactive 2017 Northwest Pacific typhoon season saved its worst for last, as the final storm of the year, Typhoon Tembin, was also the deadliest...

Tembin hit the southern Philippines island of Mindanao as a tropical storm on December 22, dumping torrential rains that triggered devastating flash floods and mudslides. According to Philippines news source rappler.com, Tembin (called Vinta in the Philippines) killed 240 people and left 107 missing. This death toll surpasses the 114 killed by Typhoon Damrey in the Philippines and Vietnam in November as the deadliest tropical cyclone in the world in 2017 (though indirect deaths in the Caribbean from Hurricane Maria have been estimated to exceed 1,000.) Fortunately, Tembin weakened to a tropical depression before brushing Vietnam on Monday, causing no deaths or major damage there.

There may still be one more named storm in the Northwest Pacific this year, though. The Tuesday morning runs of both the GFS and European models predicted that a tropical storm would form in the waters a few hundred miles east of the Philippines this weekend, with the storm making landfall in the southern Philippines on New Year’s Day.

An average to below-average year for Northwest Pacific typhoons

It was an average year for the number of named tropical cyclones in the Northwest Pacific in 2017, with 27 named storms, according to statistics of advisories from the Japan Meteorological Agency (JMA) compiled at Digital Typhoon; the U.S. Joint Typhoon Warning Center (JTWC) classified 26 named storms in 2017. The 1951 – 2010 average for the Northwest Pacific was 26 named storms per year. However, typhoons were much weaker than average in 2017; this year’s Accumulated Cyclone Energy (ACE) was 154.5, about half the average of 307 we expect to see by December 26. Only one Category 5 typhoon was observed in the Northwest Pacific in 2017—Super Typhoon Noru of July, which topped out with 160 mph winds. Between 1990 – 2016, the Northwest Pacific averaged 2.9 Category 5 storms per year, including five such storms in both 2015 and 2016. Stronger than usual surface trade winds and unfavorable upper-level winds worked to keep this year’s typhoons weaker than usual, despite the presence of sea surface temperatures (SSTs) that were more than 1°C (1.8°F) warmer than average over much of the Northwest Pacific.

Deadly December typhoons in the Philippines

Strong typhoons can occur year-round in the Northwest Pacific, and the southern Philippines are no stranger to strong December storms. Typhoon Pablo (Bopha) left 1,900 people dead or missing mainly on Mindanao's eastern provinces in December 2012, and Typhoon Sendong (Washi) killed 1,080 people on Mindanao's north coast in December 2011. And just last year, Super Typhoon Nock-Ten peaked as a Category 5 storm with 160 mph winds at 3 UTC Christmas Day, making landfall in the Philippines at 6 UTC Christmas Day, 2016, as a Category 4 storm with 155 mph winds and a central pressure of 915 mb. Nock-Ten killed 24 people and did over $1 billion in damage, and was the strongest landfalling typhoon ever recorded so late in the year. The only stronger typhoon recorded so late in the year over the ocean was Super Typhoon Hester, which peaked as a Category 5 storm with 185 mph winds on December 31, 1952, about 1,000 miles east of the Philippines (Hester recurved out to sea without affecting any land areas.) Nock-Ten’s formation was aided by ocean temperatures that were up to 1°C (1.8°F) warmer than average.

Dr. Jeff Masters co-founded Weather Underground in 1995, and flew with the NOAA Hurricane Hunters from 1986-1990.