(Special Note: By law, the Job One for Humanity organization does not and cannot endorse or condemn candidates or political parties. It is allowed to provide commentary on specific policies that political candidates or parties are forwarding that do relate to or affect our mission.

We provide all information on the basis that it is for you alone to decide upon its merit or usefulness. We provide this information also to encourage public discussion and dialog on the relevant policy issues. The article below is written by Peter Carter, an independent climate researcher. This article represents the analysis, positions, and opinions of Peter Carter as a private individual.)

On 22 August 2020, the Republican Party passed a firm resolution to stick with the party’s 2016 platform without any change, saying it “will continue to enthusiastically support the President’s America-first agenda” (or, more accurately, his “America-second agenda” as his first agenda always seems to be Donald Trump).

This will continue the Trump / GOP-driven descent towards American fascism.

On climate change, it will continue to “unleash $50 trillion in untapped shale oil, and natural gas reserves, plus hundreds of years in clean [sic] coal reserves.” 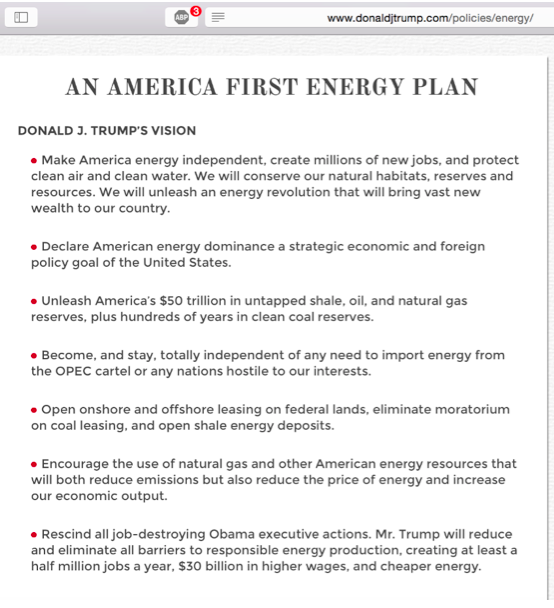 The GOP platform will continue to remove all US environmental and species habitat protection, at this time of collapsing major global ecosystems and the 6th mass extinction of life on Earth.

This is a planet-killing platform for the Republican Party.

Several sources agree that the Democratic Party platform does not adequately address the climate emergency. Food & Water Action Policy Director Mitch Jones called the August 2020 report of the Senate Democrats' Special Committee on the Climate Crisis “underwhelming and inadequate”: “It fails to address the vital need to end the extraction, processing, and burning of fossil fuels …. Any serious climate proposal must have at its center a plan to ban fracking, stop new fossil fuel infrastructure, and end the export of crude oil and natural gas. Anything less condemns future generations to increasing climate chaos.”

Morris Pearl, in Common Dreams, says that the DNC's platform will guarantee a loss If Democrats don't do more, explaining, “Democrats are simply not going to win votes if they see a crisis of this scale and respond with laughably small, do-nothing policy ideas.”

Greenpeace USA has given the Democratic Party platform only a ‘C+’ on climate.

The Democrats have an opportunity to galvanize millions of young voters with an ambitious, visionary climate platform, but they’re making a mess of it. We thought the party that claims it wants to lead our country into the future had moved beyond a middle of the road approach to the climate crisis. This platform is a step backward, and we deserve better.

We expect action at the scale that science and justice demand.

Biden and Harris have taken much more aggressive stances towards the fossil fuel industry, including strong support for ending fossil fuel subsidies, a common-sense policy that was curiously stricken from the Democratic Party Platform Committee report at the eleventh hour.

The evaluation is based on two broad criteria. First, lawmakers must end the fossil fuel era by enacting policies to halt oil, gas, and coal expansion, phase out existing production, and center fossil fuel workers and climate-impacted communities in the transition to a renewable energy economy.

Second, our elected officials must advance a Green New Deal, including mobilizing towards 100 percent renewable energy for all, creating millions of family-sustaining union jobs, and securing a better future for communities that have borne the brunt of fossil fuel industry exploitation.

The 2020 Democratic Party platform earned 21/50 in the fossil fuel phase-out category and 31.5/50 in the 100 percent renewable energy category.

I certainly agree with Greenpeace. The DNC platform, I assume, is the real Democratic Party policies, whatever the DNC speeches said. First, I have to say there was but one speech that addressed the climate emergency, from New Mexico Governor Michelle Lujan Grisham, well worth hearing.

To the shock of American environmentalists, at the Democratic National Convention, the elimination of fossil fuel subsidies was removed from the Democratic platform. This left the Democratic platform with good intentions to increase renewable energy and energy efficiency, but no strong policies to eliminate US greenhouse gas emissions. Without the backing of the Democratic National Committee, the Biden-Harris presidency will be hamstrung on mitigating climate change, which requires rapid and united action against the big US fossil fuel corporations and the investment banking industry that are financing the fossil fuel industries in their planet-wrecking agenda.

In the platform there is no actual Environment section, which is extraordinary. There are two climate sections: Combating the climate change crisis and pursuing environmental justice (p. 49), and Climate change (p. 79).

The first section starts “Climate change is a global emergency. We have no time to waste in taking action to protect Americans’ lives and futures. […] Although the youngest generations of Americans have contributed the least to this calamity, they stand to lose the most as they suffer from the impacts of runaway carbon pollution for decades to come.” Yet there is nothing on giving climate or environmental legal rights to youth, which was specifically denied by the Republican Attorney General in the Our Children’s Trust case.

Furthermore, there are no transformative economic measures to stop corporations from evading paying for their deadly pollution — which they do by externalizing costs — and no prohibition of future discounting these costs. There is no promise to stop fossil fuel corporation bailouts or subsidies by government.

The platform has “reducing harmful methane and carbon pollution from the energy sector” but the IPCC science says these global emissions must be slashed to “near zero” — not just reduced (IPCC AR5 2014). “Reduce” can mean anything. Incredibly, the only mention of fossil fuels is to “hold fossil fuel companies accountable for cleaning up abandoned mine lands, oil and gas wells, and industrial sites.”

The IPCC science says global emissions must decline rapidly from 2020, with a 7% cut per year after that, according to the UN Environment Program. There is nothing in the platform supporting this science. It has rejoined the Paris Agreement but does not give a new US emissions target for 2030, as is required. It could have said, but does not say, that US emissions must drop substantially in the first year of a Democratic administration.

US emissions have dropped since 2010 but are still running at about 6570 megatonnes (2019 figure) of CO2 equivalent and are projected to remain at that colossal level for the next ten years. Climate Action Tracker judges this “critically insufficient” for the 1.5ºC and even the 2ºC limit (especially considering these emissions have to get to zero by mid-century or sooner). Though the Democratic platform acknowledged the climate emergency, it does not have an emergency response, making it a “permit for planet destruction” policy.

The platform has net-zero emissions by 2050. Though “net-zero” entered the climate change vocabulary 10 years ago, it allows the fossil fuel industry to keep polluting. The platform links net-zero carbon with carbon capture and sequestration (CCS), which at best is not feasible at any scale, and attempts over many years with US government support have failed. These fossil fuel friendly ideas have been around for decades, with no prospect of viable CCS in the foreseeable future. This combination of assumed net zero and CCS negates the integrity of the climate change plan. Our only future is a zero-fossil-fuels future.

Warfare is a powerful driver driving fossil fuel emissions. Global military expenditure saw its largest annual increase in a decade, reaching $1,917 billion in 2019, with spending by the United States of $732 billion in 2019 — 38% of global military spending. The US has long been a major world warmonger and the platform says, “Democrats believe our military is — and must be — the most effective fighting force in the world.” The platform says two decades of unceasing US conflict with small nations have cost more than $5 trillion and claimed more than half a million lives, which it promises to stop. Crucial for global decarbonization is global peaceful co-existence, by international disarmament and demilitarization. The platform only says it would end “forever wars.”

There is no emergency war-time type government and public climate mobilization. What is needed is a US Manhattan Project and Marshall Plan massive model with all hands on deck and all resources committed over the next five years. The above war-related projects were achieved in four years.

The second climate change section (with environmental degradation), comes under Renewing American Leadership. It starts: “Democrats will immediately rejoin the Paris Climate Agreement, commit the United States to doing its fair share and lead the world in the effort to keep global warming to 1.5 degrees Celsius, and convene a world summit aimed at new and more ambitious global targets to reduce greenhouse gas pollution.” But there are no specific policies, no US emissions cut target (like the IPCC 50% cut by 2030), no danger level of atmospheric CO2, no US climate law, no carbon price, no termination of fossil fuel subsidies, no litigation against large greenhouse-gas-polluting corporations, and no regulation of banking corporations to stop financing large planet-killing fossil fuel expansion projects.

Obviously the Republican administration must be turfed out of the White House, but the fight for our survival, against the big US fossil fuel corporations and the big US investment banking corporations that are financing them, still has to be greatly strengthened under the Democratic Party.

Job One for Humanity links that relate to the critical issues in this article:

Click here to see what our global collapse will be caused by as well as how it will unfold.

Click here for the real 2025 global fossil fuel reduction targets. The real targets that politicians and political parties of all kinds are afraid to discuss publically.

Click here to see what a global government mass mobilization should look like to save us from global warming extinction.

Click here to see today's nine most important facts about climate change and global warming today's political candidates and parties do not want you to know.