THE $8 TRILLION FIGHT OVER HOW TO RID AMERICA OF FOSSIL FUEL... 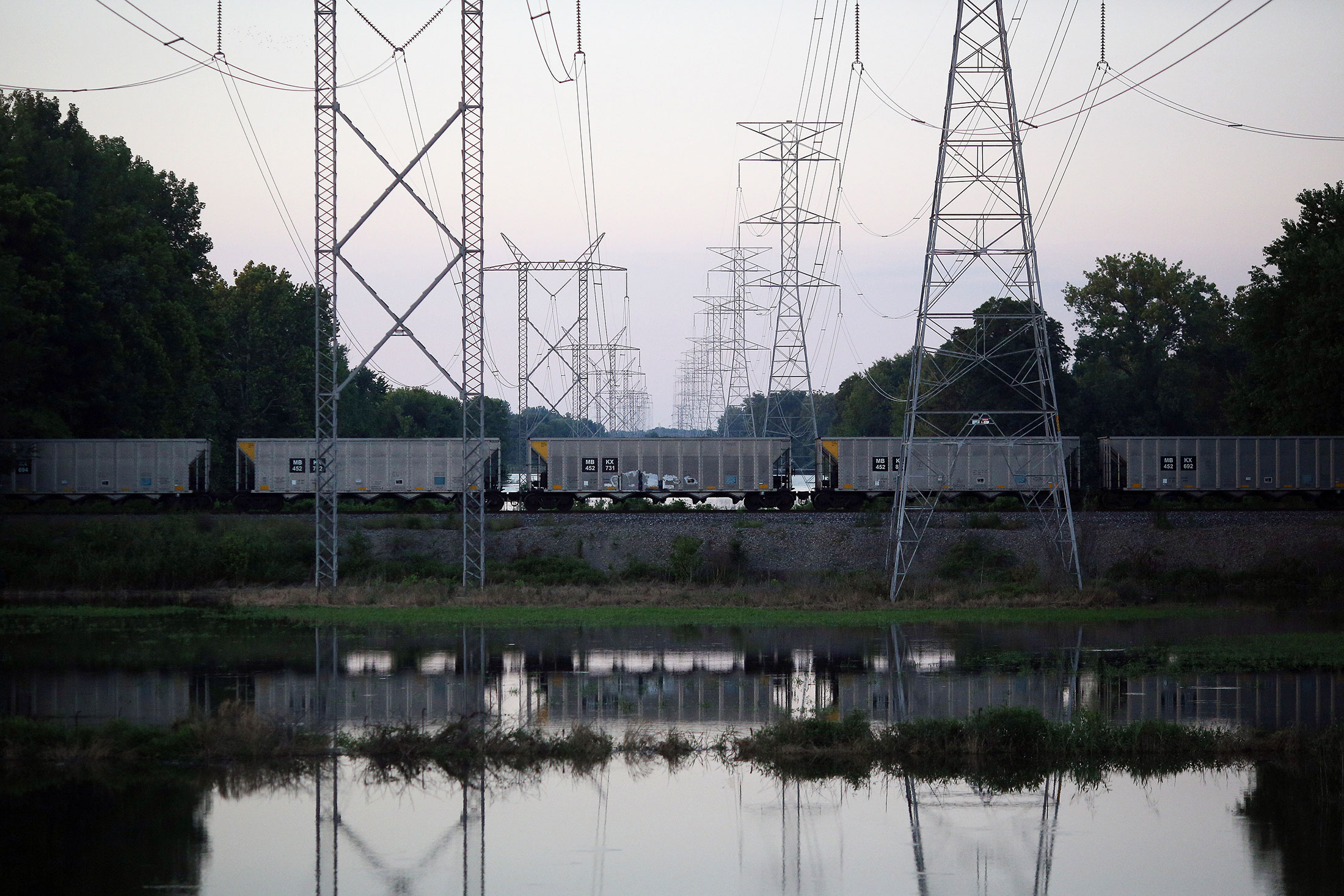 Economists agree it can be done, but differ on how much it will cost...

For every economist, there exists an equal and opposite economist, and they’re both wrong.

Like many jokes, this one is funny (to economists, anyway) because it’s true. What isn’t so funny is its application to the biggest challenge of the 21st century: How to shed a fossil-fuel energy infrastructure that seems hell-bent on destroying us. There are several camps trying to decide how much we must spend to avoid environmental disaster. Consensus on a grand total is a matter of degree, with estimates varying by as much as $8 trillion.

Geoffrey Heal, an economist at Columbia Business School, recently published a National Bureau of Economic Research working paper that asks what would it take—over the next three-and-a-half decades—to cut U.S. greenhouse gas emissions to 80 percent below their 2005 level? That’s not a made-up target: It’s the goal the Obama administration submitted (PDF) to the UN. It’s also the long-term goal the U.S. will bring to G20 negotiations next week. And it shows up in the 2016 Democratic Party Platform (PDF) upon which Hillary Clinton is running for president. (Republican candidate Donald Trump has rejected the science of global warming. Libertarian candidate Gary Johnson recognizes climate change and is “open to” a carbon tax.)

Among scientists, however, there is agreement. Two Harvard economists, after trawling through voluminous, authoritative research, said last year that the odds of an utterly catastrophic finale to humanity’s atmospheric experiment is about 10 percent. That’s a conclusion that can focus minds pretty quickly—and perhaps turn the expenditure of trillions of dollars over three decades into only a tough, but manageable, problem.

Heal’s main goal is to figure out, in a policy-agnostic, nonpolitical way, the economics of replacing 66 percent of U.S. energy output—the coal and gas used for electricity generation—with renewable energy or a combination of renewables and nuclear power. “I wanted a way of doing it that was transparent,” Heal said, “in which anybody who was interested in it can understand, and—if they disagreed—they can go back and do it their own way.”

That much is straightforward, and Heal excels at giving caveats for why he's dismissing certain topics. (For example, agricultural and cement-making emissions are largely canceled out by forest growth). His biggest problem is the disappearing-reappearing nemesis of solar and wind advocates. It's called “intermittency,” or the fact that the sun doesn't shine and the wind doesn't blow all the time. It's a problem that's front-of-mind in the young battery industry, which is trying to make electricity storage so inexpensive that utilities, businesses, and homes can store excess power for calm, cloudy days.

Heal is up against a wall in his estimates on this count because, he writes, nobody knows how much storage the country needs, and nobody knows how much it would cost (other than a lot), He is confident the cost will be lower than the $350 a kilowatt-hour PowerWall battery introduced by Tesla last year. Battery prices are dropping as demand increases. 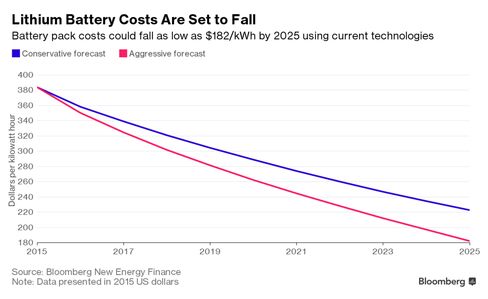 His conclusions pivot on the price of—and estimated need for—nationwide electricity storage. Assume that the U.S. needs enough backup for just one day: Then renewables and batteries are already cheaper than carbon-free nuclear reactors. Posit two days worth of storage, or, as others have argued, a week: In that case, nuclear, which is economically prohibitive today, becomes far and away the cheaper option, Heal says.

That leaves a range of answers to his main question. The investment to make sufficient electricity to power America, with an 80 percent cut in greenhouse gas emissions by 2050, would cost anywhere from $1.28 trillion to $5.28 trillion.

“So in the best case, we are on track,” Heal writes. “In the worst, we are scaling up the U.S.’s level of expenditure on new generating capacity by a factor of about four.”

Heal's paper “is interesting in the sense of ‘OK, let’s look at one pathway and do the math,’” said John Larsen, a director of the research firm Rhodium Group. Recent, seminal work (PDF) has come up with a number of other pathways, but no definitive answers.

“It sets up a nice framework for thinking about some of these issues,” said Ethan Zindler, head of Americas at Bloomberg New Energy Finance. Ray Kopp, co-director of the Center for Energy and Climate Economics at the research group Resources for the Future (RFF), also praised Heal: “He did a very careful job.”

That praise, however, doesn't necessarily translate into agreement with his methodology, or conclusions.

“I think he has made a major mistake in the numbers,” said Mark Z. Jacobson, a Stanford University professor of civil and environmental engineering. “When the mistake is corrected, the result encompasses our previous calculation results.”

Jacobson researches how states (PDF) and countries can achieve 100 percent renewable energy systems—even more ambitious than the cuts President Barack Obama wants by 2050 and which informed Heal's study. What Jacobson calls a mistake in his colleague's paper concerns the overall estimate, which accounts only for reductions from electricity generation, transmission, and storage.

But electricity makes up only 30 percent of U.S. carbon emissions. To account for the other two-thirds of energy use—transportation, industry, and residential and commercial use—that total should be much higher, Jacobson said.

By his measure, that would leave an economy-wide, 100 percent renewable price range of between $5.3 trillion and $22 trillion by 2050, closer to Jacobson's own central estimate of about $14.6 trillion, he said.

Once Jacobson expanded Heal's estimate so that it covered 100 percent of greenhouse gas emissions from all key sectors, their approaches stood about $8 trillion apart.

Heal did estimate that electrifying American transportation—cars, trucks, trains—would require approximately $620 billion in additional generation capacity. Beyond that, he didn't go into non-electricity costs because the numbers would be smaller (billions, not trillions). “These costs will be small relative to the massive numbers associated with energy production and storage,” he said.

Close all those tabs. Open this email.
Get Bloomberg's daily newsletter.

Also, the costs are already expected to be covered by consumers or businesses—he doesn't consider it additional investment: “People replacing their current car will buy an electric one. People renovating a home will install electric, rather than gas/oil water, and space heating.” Heal set for himself a challenging but limited task: What, as an order-of-magnitude estimate, does the U.S. need to spend to hit its goal? Many criticisms of the paper concern fine tuning.

What we don’t know

Feeding his work through the meat-grinder of expert review led to many unaddressed variables, according to Larsen, Zindler, and Kopp. Despite their questions regarding the study, they agree with Heal that the overall challenge must be addressed soon, lest it all become an academic exercise. Some of the variables are:

The utility of Heal's paper isn't its conclusions (unless you agree with him on everything). It's that he sat down and thought about it and did some arithmetic. No National Energy Modeling System. Just a curious question seeking a fuzzy answer—an answer to a question that, if you believe those Harvard economists, has a 1 in 10 chance of ending civilization as we know it.

Watch Next: The Fuel of the Future Is Not a Renewable