THE ALARMING NUMBER OF FIRES IN THE BRAZILIAN AMAZON... 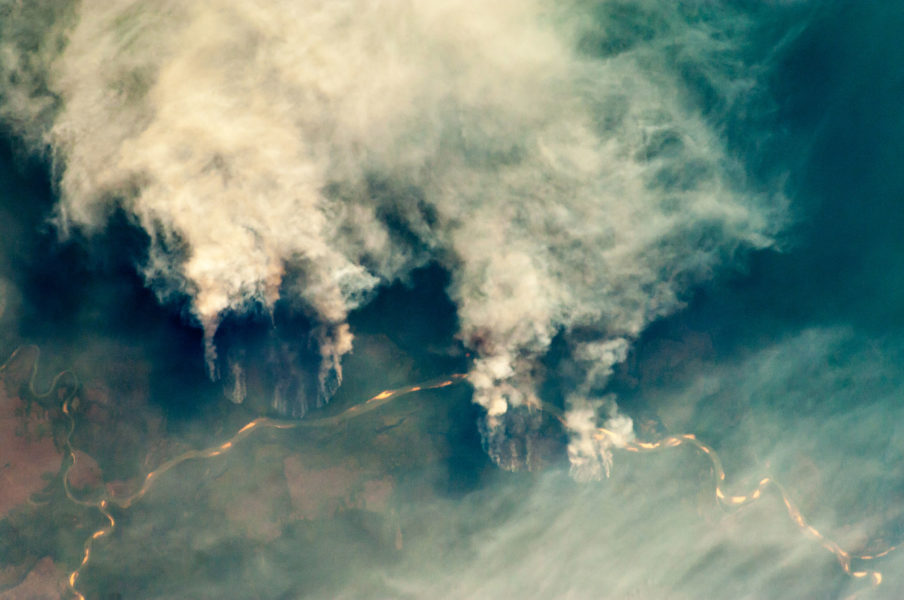 Slash-and-burn forest clearing along the Rio Xingu (Xingu River) in the state of Mato Grosso. Photo via Wikimedia Commons.

For three months, from September to December 2015, Manaus was engulfed in smoke, resembling Beijing. That was an unusual scene, and an undeniable sign that predatory exploration in the Brazilian Amazon has not yet been properly tackled...

From the speeding boat, the jungle was a single block of green, its shades recycled across the riverbank and reflected on the thick, black water. The steam rolling from the trees was as foamy as the tracks we were leaving. Birds cut the clouds with their multicolored feathers. The forest around us was dense, hot, all humming and watching. The hard light confused our senses.

Daniel was silent, scratching his head and reinforcing my suspicion that we were lost. But he is at home in the jungle. He works in the Brazilian Amazon as an environmental educator with sharp humor and a furry voice.

We met in Manaus, a city nestled in the Amazon rainforest. He proposed we talk on a small motor boat, so we could go deeper into the heart of the forest. And so we did. He was the pilot and lecturer; he likes speed – fast boat and short words. He is the voice of all beings who inhabit the Amazon. They want to be heard.

For three months, from September to December 2015, Manaus was engulfed in smoke, resembling Beijing. That was an unusual scene, and an undeniable sign that predatory exploration in the Brazilian Amazon has not yet been properly tackled.

The sharp decrease in the annual rates of forest loss in the Brazilian Amazon is celebrated worldwide. The trend started in 2005 after a peak in deforestation the year before; 27,772 square kilometers were deforested in 2004 (about 6.9 million acres). In 2012, the forest loss rate reached its lowest level since records began in 1977, having dropped to 4,571 square kilometers (about 1.1 million acres).

However, the figures are not so bright when it comes to forest fires, and few people are talking about that. The number of fires in the Brazilian Amazon is alarming, and that was especially true in 2015, when a sharp increase in forest fires occurred, as illustrated in the graph below.

Natural factors alone fail to explain this recent increase, as similar climatic conditions in the past were not associated with the same amount of forest fires.

Forest fires and precipitation are strongly correlated in the Brazilian Amazon; in dry years, more forest fires occur. 2015 was a dry year, but not as dry as 2010 or 2005 were – years when the region faced anomalous droughts. Nevertheless, in 2015, forest fires increased 115.6 percent and 105.5 percent compared to 2005 and 2010, respectively. Hence it is safe to say that the peak observed last year was strongly associated with unregulated anthropogenic activities in the forest.

In the region, using fire in order to clear large areas is a common practice. The expansion of roads, settlements, croplands and cattle ranches has been leading fires to reach ever-wider areas of the forest.

The consequences associated with this issue are vast. They are felt locally, regionally and globally. Forest fires contribute to climate change due to the emission of three greenhouse gases: carbon dioxide, methane, and nitrous oxide. As the forest burns, health-damaging gases – carbon monoxide, non-methane hydrocarbons, methyl chloride, and methyl bromide – are also emitted, as well as volatile organic compounds (VOCs) and aerosols. VOCs interact with nitrous oxides to form ozone, a phytotoxic gas. Aerosols cause the suppression of cloud formation and the decrease of precipitation efficiency. Moreover, a positive feedback between fire-induced death of trees and increased solar penetration in the forest occurs, resulting in the intensification of successive fires.

Daniel slowed down, and the jungle unfolded into different textures, shapes, shadows, twists, and colors. We were approaching a cattle farm. He handed me his binoculars, and pointed to an area where several leafless trees were half-standing atop blackened trunks. We then passed a riverside community where children had fire in their eyes. Many individuals there suffer from respiratory illnesses when the forest burns. People in their homes in the city do too, rich and poor. We wondered what justifies 2,368,397 fires in one year.

This number shows that the environmental management of Brazilian forests is not as efficient as it must be. When the world clamors for the reduction of deforestation in the Amazon basin, there is an expectation that all of the processes that lead to deforestation – forest fires among them – will be soundly addressed. But the fact is that the mechanisms so far adopted do not provide holistic solutions; they are focused on the reduction of the immediate forest loss, caused by clear-cutting practices. Change is required.

Citizens of the world can help reshape the exploratory patterns in the Amazon forest. Demanding that beef, soy, and timber products have not been produced from land cleared by fire or through deforestation will encourage new management practices in the region. Reducing the consumption of these items will also have significant positive consequences.

Daniel sped back to the city. The endless green became less solid. The neon wings seemed to be fading. I feared vapor was smoke. I choked, like the forest...