THE AXIS OF CLIMATE EVIL... 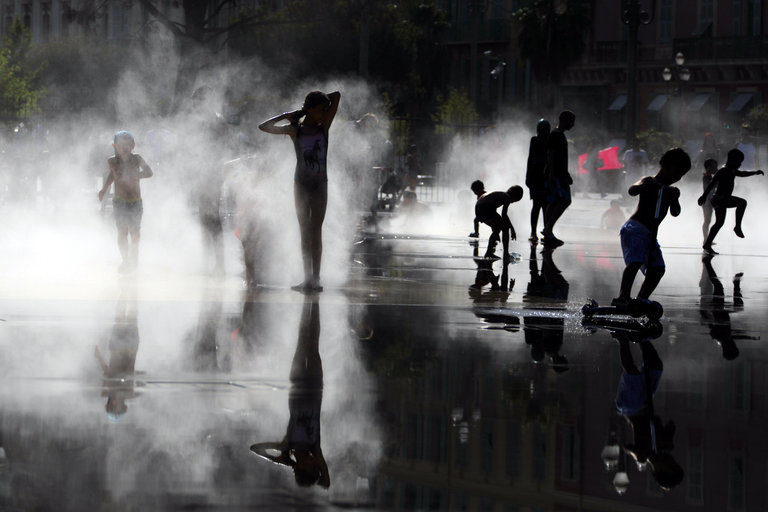 Summers are getting hotter and street fountains can provide only so much relief. Credit Eric Gaillard/Reuters

“It’s Not Your Imagination: Summers Are Getting Hotter.” So read a recent headline in The Times, highlighting a decade-by-decade statistical analysis by climate expert James Hansen. “Most summers,” the analysis concluded, “are now either hot or extremely hot compared with the mid-20th century.”

So what else is new? At this point the evidence for human-caused global warming just keeps getting more overwhelming, and the plausible scenarios for the future — extreme weather events, rising sea levels, drought, and more — just keep getting scarier.

In a rational world urgent action to limit climate change would be the overwhelming policy priority for governments everywhere.

But the U.S. government is, of course, now controlled by a party within which climate denial — rejecting not just scientific evidence but also obvious lived experience, and fiercely opposing any effort to slow the trend — has become a defining marker of tribal identity.

Put it this way: Republicans can’t seem to repeal Obamacare, and recriminations between Senate leaders and the tweeter in chief are making headlines. But the G.O.P. is completely united behind its project of destroying civilization, and it’s making good progress toward that goal.

So where does climate denial come from?

Just to be clear, experts aren’t always right; even an overwhelming scientific consensus sometimes turns out to have been wrong. And if someone offers a good-faith critique of conventional views, a serious effort to get at the truth, he or she deserves a hearing.

What becomes clear to anyone following the climate debate, however, is that hardly any climate skeptics are in fact trying to get at the truth. I’m not a climate scientist, but I do know what bogus arguments look like — and I can’t think of a single prominent climate skeptic who isn’t obviously arguing in bad faith.

Take, for example, all the people who seized on the fact that 1998 was an unusually warm year to claim that global warming stopped 20 years ago — as if one unseasonably hot day in May proves that summer is a myth. Or all the people who cited out-of-context quotes from climate researchers as evidence of a vast scientific conspiracy.

Or for that matter, think of anyone who cites “uncertainty” as a reason to do nothing — when it should be obvious that the risks of faster-than-expected climate change if we do too little dwarf the risks of doing too much if change is slower than expected.

But what’s driving this epidemic of bad faith? The answer, I’d argue, is that there are actually three groups involved — a sort of axis of climate evil.

First, and most obvious, there’s the fossil fuel industry — think the Koch brothers — which has an obvious financial stake in continuing to sell dirty energy. And the industry — following the same well-worn path industry groups used to create doubt about the dangers of tobacco, acid rain, the ozone hole, and more — has systematically showered money on think tanks and scientists willing to express skepticism about climate change. Many — perhaps even most — authors purporting to cast doubt on global warming turn out, on investigation, to have received financial support from the fossil fuel sector.

An influential part of the U.S. political spectrum — think the Wall Street Journal editorial page — is opposed to any and all forms of government economic regulation; it’s committed to Reagan’s doctrine that government is always the problem, never the solution.

Such people have always had a problem with pollution: When unregulated individual actions impose costs on others, it’s hard to see how you avoid supporting some form of government intervention. And climate change is the mother of all pollution issues.

Some conservatives are willing to face this reality and support market-friendly intervention to limit greenhouse gas emissions. But all too many prefer simply to deny the existence of the issue — if facts conflict with their ideology, they deny the facts.

Finally, there are a few public intellectuals — less important than the plutocrats and ideologues, but if you ask me even more shameful — who adopt a pose of climate skepticism out of sheer ego. In effect, they say: “Look at me! I’m smart! I’m contrarian! I’ll show you how clever I am by denying the scientific consensus!” And for the sake of this posturing, they’re willing to nudge us further down the road to catastrophe.

Which brings me back to the current political situation. Right now progressives are feeling better than they expected to a few months ago: Donald Trump and his frenemies in Congress are accomplishing a lot less than they hoped, and their opponents feared. But that doesn’t change the reality that the axis of climate evil is now firmly in control of U.S. policy, and the world may never recover.