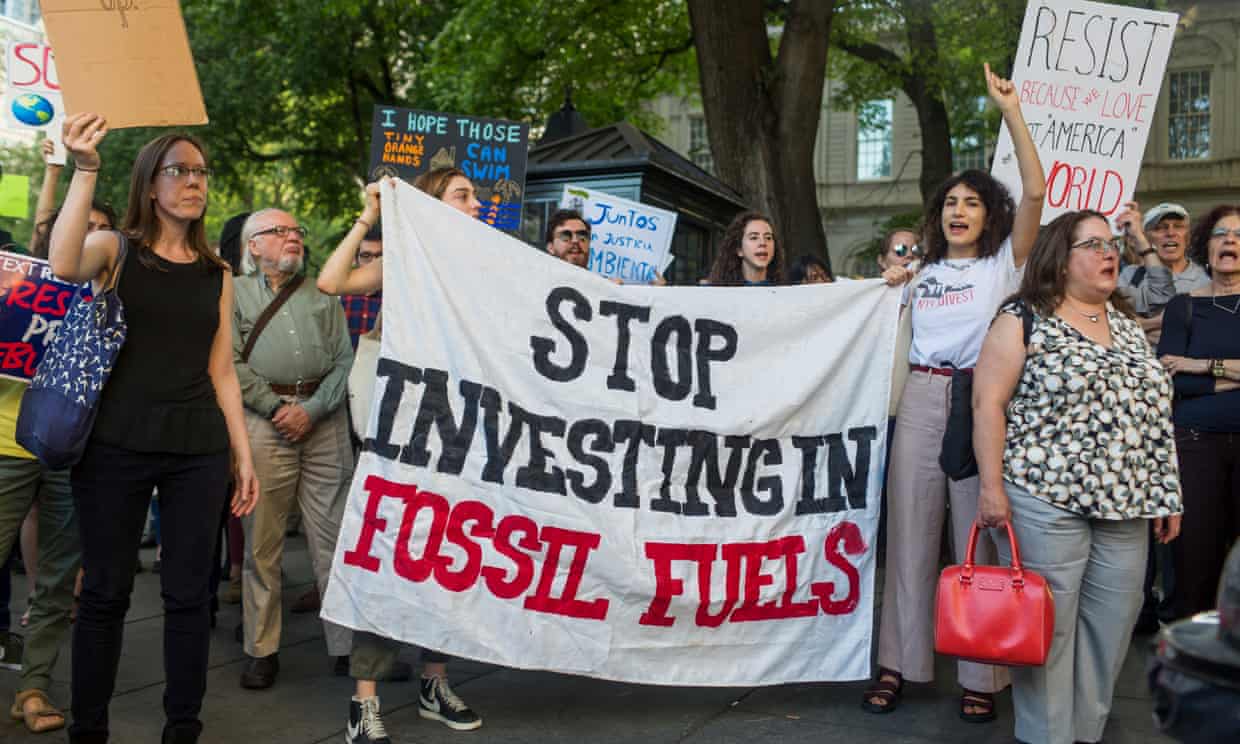 ‘Whether you live in the United States, Europe or Brazil, there are already divestment campaigns underway near you.’ Photograph: Michael N/Pacific/BarcroftImages

Divestment provides us with a powerful way to cut our ties with this destructive industry and start moving in a new direction...

After Trump’s decision to exit the Paris climate agreement, many of us are looking for a way to fight back. One of the simplest and most powerful things we can do right now is to divest from fossil fuels.

What we saw in the Rose Garden on Thursday was Trump and his advisors making a bet. A bet that the scientists have got it all wrong, that climate change is a hoax, and climate action nothing but a globalist scheme to hurt the American economy. For most of us, this sort of denial and paranoia is mind-boggling. But every time we invest another dollar in a coal company like Peabody Energy or an oil giant like Exxon, we’re taking the exact same gamble.

That’s because none of the major fossil fuel companies have presented a credible plan showing how they are going to comply with the goals in the Paris agreement. Sure, companies like BP and Chevron highlight lots of “green” initiatives on their websites, but take a quick glance at their business plans and it’s still drill-baby-drill.

Even companies like ExxonMobil, who have come out in support of the Paris agreement, did so because they think it will help them use more, not less, of their fossil fuel reserves. That’s because most countries’ pledges under the agreement are just strong enough to drive out the coal industry, increasing the demand for natural gas, but not so strong to take gas off the table.

Trump’s speech on the Paris climate agreement, in full

For major natural gas producers like ExxonMobil, that’s a win-win: cut down King Coal so Big Oil can take the throne. For us, it’s just a loss: locking ourselves into decades more of natural gas use would ultimately make it impossible to meet the long-term targets laid out in Paris.

Divestment provides us with a powerful way to cut our ties with this destructive industry and start moving in a new direction. It’s also a strategy that’s really beginning to work. Thanks to the work of thousands of grassroots campaigners around the world, we’ve succeeded in getting over 700 institutions representing more than $5.4tn in capital to commit to going fossil free.

Meanwhile, the campaign continues to spread around the world: this May’s Global Divestment Mobilisation, a worldwide week of divestment action, saw actions in Japan, Kenya, South Africa, Indonesia and beyond. Together, we’re helping isolate the fossil fuel industry: taking away their social license to operate, weakening their stranglehold on our governments, and moving money out of climate destruction and into real climate solutions.

With Trump trying to make the case that climate action is bad for the economy, this work is more important than ever. We know that it’s the renewable energy sector, not fossil fuel companies, that are driving economic growth and creating millions of jobs, but as long as the public thinks that “smart” money is investing in fossil fuels, the clean energy future will still feel like a distant mirage.

When big institutions, like the University of California or the $350bn New York City and state pension funds are still investing in companies like ExxonMobil, it sends a signal that they aren’t really serious about their climate rhetoric. If they were, they’d practice what they preach and start investing their money in climate solutions.

By getting our pension funds, banks and public institutions to pull their money out of coal, oil and gas, and highlight their investments in clean energy and climate solutions, we can help fundamentally shift the conversation. As people start to see and feel the clean energy economy unfolding around them, they’ll be more likely to support politicians who are calling for a transition away from fossil fuels, and less likely to believe the type of lies Trump was spewing from the White House on Thursday.

We can also use divestment to hold back the expansion of the fossil fuel sector. As nervous investors start heading for the exits, fossil fuel companies are coming under pressure to sell off their coal, oil and gas reserves. 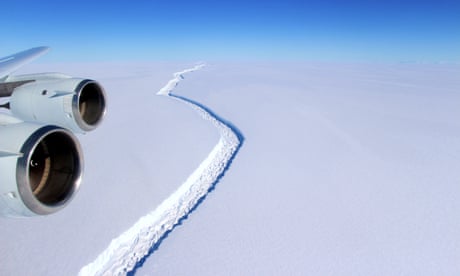 Just this week, for example, Shell announced that was effectively writing off all of its major tar sands reserves in Canada. Banks are also feeling the heat thanks to campaigns like DeFund DAPL, which is pressuring banks to drop their support for the companies behind the Dakota Access Pipeline, an effort that will likely spread to include other infrastructure projects. Trump can huff and puff at the White House all day long, but if the money for new fossil fuel projects dries up, his agenda goes nowhere.

Whether you live in the United States, Europe or Brazil, there are already divestment campaigns underway near you. This isn’t the only strategy we need to pursue – by all means, keep riding your bike, going to marches, and pushing your city to commit to 100% renewable energy – but if you haven’t yet moved your own money, and then gotten your school, city, place of worship, and pension fund to do the same, now is the perfect time to start. There are all sorts of good resources and connections up on gofossilfree.org to help you along the way.

There’s no doubt that our work is cut out for us. While Trump was preparing to make his speech at the White House, scientists issued new warnings that the west Antarctic ice sheet could be facing complete collapse. Meanwhile, up in North Dakota, oil started flowing through the Dakota Access pipeline for the first time.

The two events are connected to each other, and then back to us, our institutions, and our money. Divestment is a way to break that chain of destruction, no matter that Trump does.