THE CARNIVORE CONUNDRUM: POTENTIAL APPROACHES TO PROMOTING A PLANT-BASED DIET FOR ENVIRONMENTAL SUSTAINABILITY... 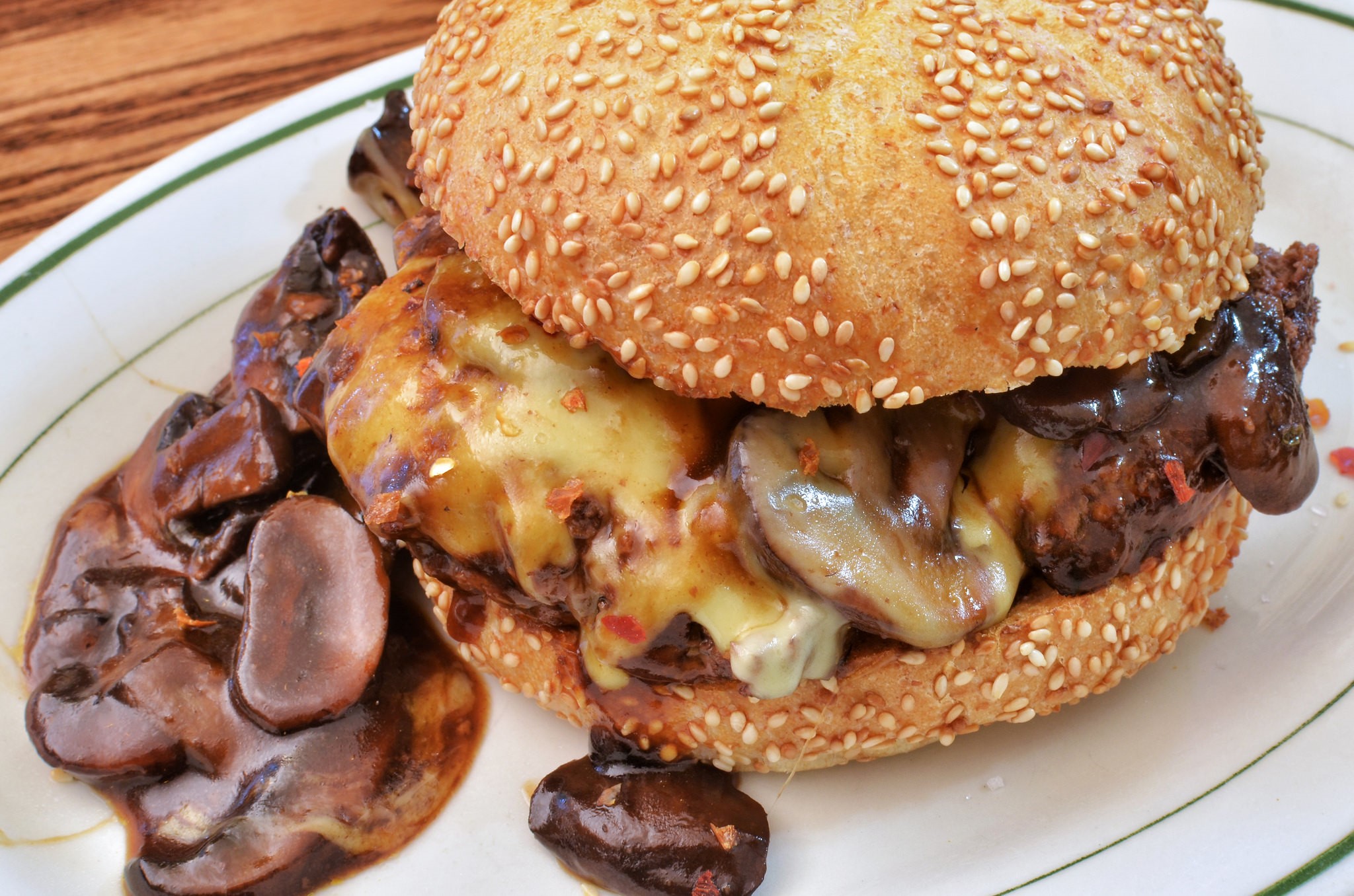 A Mushroom Swiss Burger.  Photo by jeffreyw/CC by 2.0.

By 2050, the global population may reach 10 billion people, and by as early as 2030, approximately 3 billion individuals are projected to belong to the global middle class. Generally, middle class diets consist of higher caloric intake and increased meat consumption...

In fact, several studies predicted that global calorie consumption may increase to 3,070 kilocalories (kcal) per person or 2,710 kcal per day (k⋅cal⋅d-1) by 2050. Thus, it should be no surprise that demand for meat products is expected to rise.

In 2016, approximately 258 million tons of pork, chicken, and beef products were produced globally. In the OECD-FAO Agricultural Outlook 2016-2015 report, meat production and consumption is projected to increase, especially in developing countries such as Brazil, China, India, Indonesia, Pakistan, and Vietnam. The report predicts that by 2025, rates of meat consumption in developing countries within the Middle East, Asia, and Latin America, will increase as the populations and incomes grow and more people join the middle class. Specifically, by 2025, poultry is expected to represent nearly half of the ‘additional meats’ produced globally and will surpass pork as the preferred source of meat protein in both developed and developing nations.

The combined trends of population growth and rising meat consumption per capita is particularly alarming because it projects to cause an exponential rise in agriculture sector greenhouse gas emissions. Industry and government must take steps to popularize meat alternatives.

GHG emissions are only anticipated to rise as the global demand for meat increases in the next decade or so, which inevitably sparks discussion about the long-term sustainability impacts of a meat-based diet. Many studies argue that a largely plant-based diet may contribute to lower global GHG emissions in the future. For example, a study estimated that by 2050, adopting diets low in meat protein yet high in less energy intensive foods could curb food-related global GHG emissions.

There are diverse reasons behind meat consumption among global populations. For example, meat is a focal ingredient in a variety of global cuisines and is a source of protein and other nutrients. Additionally, meat consumption plays a significant role in North America’s modern day ‘foodie’ culture; In 2016, the National Restaurant Association surveyed 1,300 professional chefs who were members of the American Culinary Federation, and asked them which food, beverages and culinary themes may be considered popular (or ‘hot’) food trends in 2017. Many of the anticipated ‘hot trends’ were related to meat-based ingredients, such as novel cuts of meat (i.e. oyster steak), locally-sourced/sustainable seafood/meat, heritage-breed meats, and free-range pork/poultry.

Despite the growing popularity of meat consumption worldwide and its significant social role, there is the unavoidable fact that altering our meat-dominant diets can complement other strategies dedicated to reducing global GHG emissions in the future. Simultaneously, it is unrealistic to anticipate a universal, human diet that is virtually meat-free because the commodity’s importance to global diets. Instead, a plant-based diet with alternative protein sources should be encouraged. This may be achieved using two approaches:

Although implementing these strategies will likely require substantial cultural changes, they have the distinct advantage of not restricting consumer choice, providing them with the freedom to continue consuming meat encouraging them to eat a more sustainable diet.

The average meat consumer may find a meat-based food product more appealing in comparison to a food item that primarily consists of plants. According to the World Resources Institute’s Better Buying Lab, food items that contain the terms ‘vegetarian’ or ‘vegan’ may be unappealing to the average meat consumer. In fact, as discussed by the Better Buying Lab, according a recent report by Menumonitor Technomic, the 20 most popular restaurant entrees in US restaurant outlets include only one plant-based dish: the veggie sandwich/wrap. Furthermore, according to a 2016 survey by the National Restaurant Association, only 43-44% of as the chefs who are members of the American Culinary Association-recognize vegetarian/vegan food trends as ‘hot’ or popular in 2017. Efforts should be made to attract the average meat consumer to plant-based food items, using creative words that advertise plant-based food items as delicious, flavorful, and environmentally conscious.

The Better Buying Lab is currently developing a lexicon for restaurants to specifically and effectively describe plant-based foods that would appeal to meat-eating customers. Alternative words to describe plant-based foods such as “plant forward”, “meatless”, or “flexitarian”, may sound more appealing to consumers who regularly consume meat than strict vegetarianism. Another approach to attracting consumers to plant-based foods is to develop plant-based dishes that are sustainable, delicious, and capable of becoming popular among diverse food outlets, from restaurants to cafeterias. In June 2017, Sonic Drive-In Fast Food Chain announced a launch of ‘The Slinger’ as a participant of the James’ Beard Foundation’s Blended Burger Project. The product will consist of a burger patty containing beef and 25 to 30% mushrooms between a brioche bun and topped with pickles, onions, mayo, and American cheese. While the Slinger is a more sustainable option than traditional hamburgers, this will not be emphasized in the branding and advertising; instead, the product will instead be advertised as a ‘steakhouse-style’ burger that is juicy and savory. After its 60-day launch in August 2017, the burger will be evaluated for its consumer appeal and operational impact. If the burger is successful, Scott Vehlein, the Vice President of Product Innovation and Development at Sonic, anticipates its national launch in over 3,500 chains.

In the April 2017 edition of Food Technology, Elizabeth Sloan discussed the top 10 food trends in 2017 using data from different industries across the US. Sloan discusses the desire for American consumers to adopt a ‘natural lifestyle’ that is “more natural, chemical free, and sustainable-focused” in addition to seeking meat alternatives as a protein source. She cites that 47% of Americans are eating meatless/meat alternative meals “regularly”, while only 1 in 5 Americans are eating less meat products. In vitro meat (IVM) is the sustainable, alternative meat product that the average meat eater who strives to adopt a more sustainable lifestyle may be seeking. Also referred to as “lab-grown meat”, IVM is meat that is grown in a laboratory, using cultured stem cells from animals. While IVM production may be perceived as less environmentally demanding than conventional meat production, it may also alleviate other concerns such as the ethical treatment of farm animals.

Wilks and Phillips (2017) conducted an online survey on Amazon Mechanical Turk, asking 673 individuals from the US between the ages of 18 to 70 about their perceptions and interests related to IVM. While two thirds of the participants expressed a willingness to trying IVM, only one third of them were willing to regularly consume IVM as a meat alternative. Furthermore, according to the participants, taste (79%), ethical concerns (24%), and cost (20%), were potential barriers to IVM consumption. However, according to the survey results, IVM was regarded as an unnatural, less tasty alternative with unappealing qualities (such as its perception of being a ‘genetically modified food’, which is largely negatively perceived to the public) compared to conventional, farmed meat.

It is vital to maintain an open, transparent conversation between the public and the scientific/food community about IVM as a method of addressing public concern over innovative meat alternatives, alleviate public fears about these developments, and establish an honest discussion about our food system between parties of different sectors, ranging from academia, industry, and government.

Not everyone has an eco-centric perspective. Some consumers may simply be uninterested in adopting a plant-based diet with lowered meat consumption for the sake of reducing negative environmental impacts and GHG emissions. But these so-called ‘sustainable diets’ and food products can be marketed as a healthy and economical choice; this approach has the potential to make them more appealing to an audience that is more focused on adopting a healthier lifestyle at a lower cost. Furthermore, approaches that were discussed in this article can further strengthen consumer appeal on plant-based diets and food products. Data and several studies have demonstrated that meat consumption is dominant in the average human diet, and with a massive upcoming global population projected to come by 2050, it is not surprising that meat production and consumption is here to stay. We would do well to start taking steps now to make sure these dietary trends do not compromise sustainability.

Renee Cosme is a Graduate Fellow at the Climate Institute.