THE CLIMATE COULD HIT A STATE UNSEEN IN 50 MILLION YEARS... 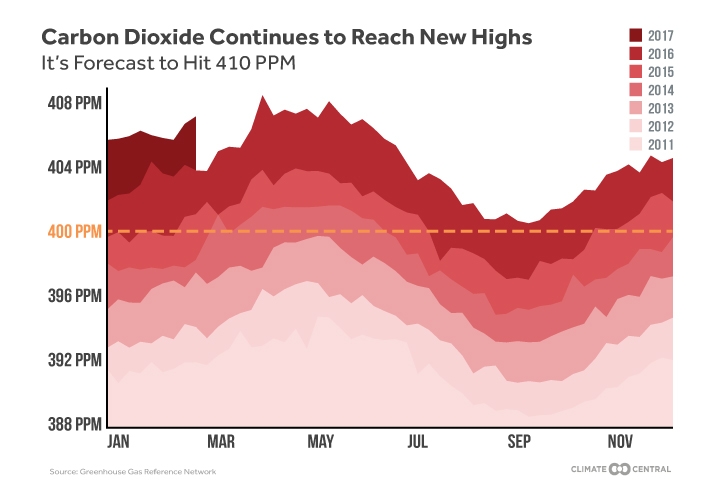 No, the headline is not a typo. Current carbon dioxide levels are unprecedented in human history and are on track to climb to even more ominous heights in just a few decades...

If carbon emissions continue on their current trajectory, new findings show that by mid-century, the atmosphere could reach a state unseen in 50 million years. Back then, temperatures were up to 18°F (10°C) warmer, ice was almost nowhere to be seen and oceans were dramatically higher than they are now.

The implications of the research, published on Tuesday in Nature Communications, are some of the starkest reminders yet that humanity faces a major choice to curtail carbon pollution or risk pushing the climate outside the bounds that have allowed civilization to thrive.

Scientists have been able to track the historic changes in carbon dioxide through a number of methods, from air pockets in Antarctic ice cores to sludge on the deep sea floor. The new research compiles 1,500 of these carbon dioxide estimates to create a view that extends 420 million years.

The carbon dioxide levels in the atmosphere today are ones that likely haven’t been reached in 3 million years. But if human activities keep committing carbon dioxide to the atmosphere at current rates, scientists will have to look a lot deeper into the past for a similar period. The closest analog to the mid-century atmosphere we’re creating would be a period roughly 50 million years ago known as the Eocene, a period when the world was completely different than the present due to extreme heat and oceans that covered a wide swath of currently dry land.

“The early Eocene was much warmer than today: global mean surface temperature was at least 10°C (18°F) warmer than today,” Dana Royer, a paleoclimate researcher at Wesleyan University who co-authored the new research, said. “There was little-to-no permanent ice. Palms and crocodiles inhabited the Canadian Arctic.”

He stressed that even if we reach those carbon dioxide levels by mid-century, crocodiles won’t suddenly appear in the Arctic. But because carbon dioxide stays in the atmosphere for centuries, climate change will continue to reshape the planet even if humans magically cut emissions to zero after hitting that peak. 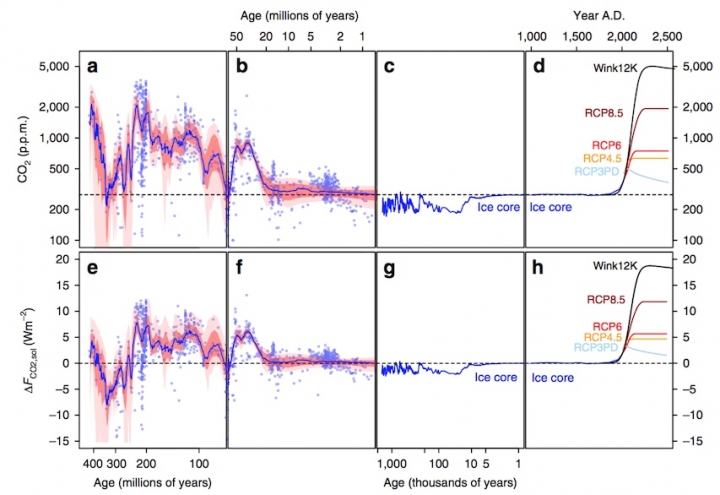 Atmospheric carbon dioxide levels could reach a level unseen in 50 million years by the 2050s. If they continue rising into the 2200s, they'll create a climate that likely has no precedent in at least 420 million years.
Credit: Foster, et al., 2017

It’s possible that warming already in the pipeline has ensured parts of the West Antarctic ice sheet face unstoppable melt. That would raise sea levels up to 13 feet and threaten coastal communities around the world.

“If there is one thing the record of past climate events teaches us is that (current) unabated fossil fuel burning will have severe and long-lasting consequences,” Richard Zeebe, a paleoclimate researcher at the University of Hawaii, said.

And that’s to say nothing of the climate change impacts the world is already seeing. Heat waves are becoming more common and intense, oceans are regularly flooding cities and wildfires are burning more intensely. The rising tide of impacts today will only swell further in the future unless carbon pollution is cut.

If humans ignore the warning in Royer’s study, however, they could put the planet into a state unheard of in nearly half a billion years. Stretching current carbon dioxide emissions trends into the more distant future means the planet could hit 2,000 ppm by 2250.

Coupling that with increases to the sun’s energy — a natural process that’s been happening for millions of years as hydrogen is converted into helium via fusion — would push the climate outside the bounds of anything the planet has likely seen in 420 million years. In all likelihood, that would make the planet uninhabitable for humans.

It’s an extreme scenario and one that world leaders are unlikely to let play out given what they already know about climate. But it serves an important purpose to remind them and the rest of the world what’s at stake.