THE DAMAGE WROUGHT BY ACIDIC OCEANS HURTS MORE THAN MARINE LIFE AND LASTS LONGER THAN YOU THINK... 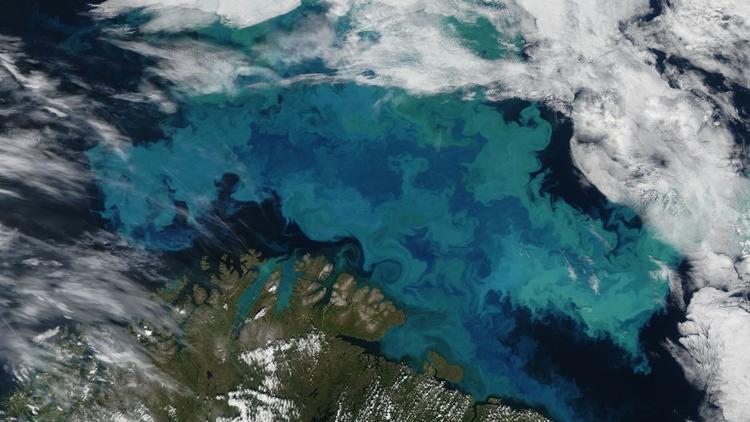 The milky white clouds in this algal bloom in the Barent Sea, off Norway and Russia, are the result of phytoplankton producing shells made of chalk. (Jeff Schmaltz, MODIS Rapid Response Team at NASA GSFC / NASA's Earth Observatory)

A milky white cloud blooms in the Barents Sea, so vast it can be seen from space...

It’s not the result of some toxic chemical spill or the sinking of a dairy-filled tanker — it’s the handiwork of millions of microscopic algae, doing what their kind have done for millions of years.

While it’s not exactly clear how the scales benefit the algae, scientists say they provide an important benefit to the rest of the world.

To build up their chalky armor, E. huxleyi eat up the dissolved carbon in the water around them. When the phytoplankton grow new shells, they shed the old ones, which sink to the bottom of the ocean. 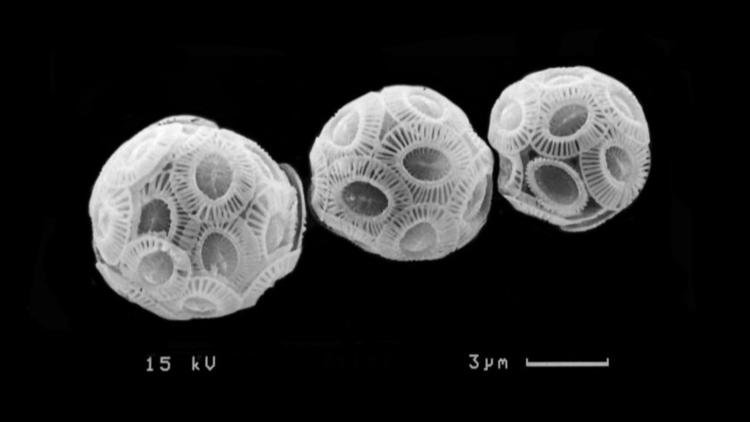 As more carbon dioxide builds up in the atmosphere and gets absorbed into the ocean, E. huxleyi and similar types of these calcifying phytoplankton are there to capture and store it away — just as trees “inhale” carbon dioxide.

The operation is so massive and industrious that an ancient species of phytoplankton, through a similar process of scale-building and shedding, gave the famous White Cliffs of Dover in southeastern England their distinctive color as their shells piled up over tens of millions of years. 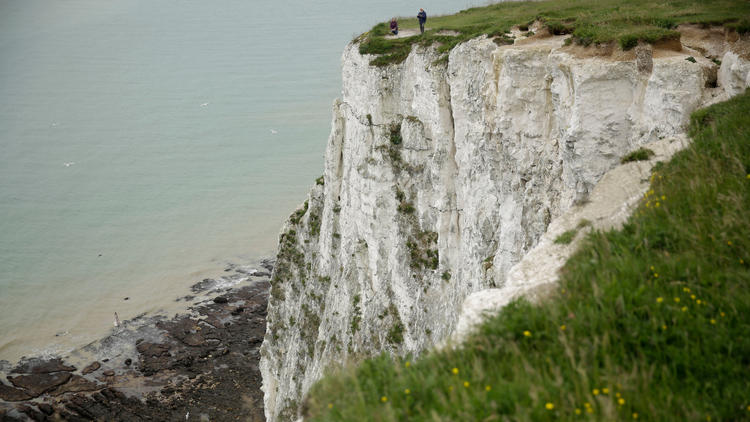 The White Cliffs of Dover in southeast England owe their color to thousands of years of calcification by phytoplankton. (Matt Dunham / AP Photo)

Though carbon dioxide fuels this undersea industry, it also threatens to destroy it, according to a study published Friday in Science Advances.

For calcifying phytoplankton, of which E. huxleyi is the most abundant species, some extra carbon in the environment means more fuel for scale-making. But that’s only beneficial to a certain point.

As humans fill the air with the carbon dioxide and greenhouse gases that cause global warming, much of that carbon gets dissolved in the ocean, causing the water to acidify.

Sometimes called the twin of global warming, ocean acidification causes corals and shellfish, whose shells are made of the same stuff as E. huxleyi’s scales, to disintegrate.

A more acidic ocean eventually will cause phytoplankton like E. huxleyi to abandon their calcifying process. As the phytoplankton lose their appetite for carbon, they leave more of it in the environment. This, in turn, could worsen the effects of climate change, said Thorsten Reusch, a marine ecologist at the GEOMAR Helmholtz Centre for Ocean Research Kiel and senior author of the study.

See the most-read stories in Science this hour »

To find out how phytoplankton will adapt to future sea changes, Reusch and Lothar Schlüter, then a doctoral student, needed to simulate the ocean conditions of the future.

In the lab, the scientists placed identical clones of E. huxleyi in varying levels of “acidified” oceans, including one that replicated conditions found today.

In the lab, E. huxleyi grow extremely fast, producing a new generation about once a day. Over four years, the algae copied themselves 2,100 times, essentially allowing the scientists to watch how the species will evolve under future ocean conditions.

“We can have the organisms of tomorrow in the lab of today,” Reusch said. “It’s like ‘Jurassic Park’ in reverse.”

We can have the organisms of tomorrow in the lab of today. It’s like ‘Jurassic Park’ in reverse. — Thorsten Reusch, marine ecologist

In the first year of the experiment, acidified E. huxleyi reacted by initially reducing their scale productivity. However, the algae eventually adapted to the new conditions and took up calcification again.

But in highly acidified oceans, phytoplankton can’t produce scales and maintain their proper body chemistry. Instead of forming scales, they switch to survival mode. After four years of simulated ocean acidification, the phytoplankton shut off their scale production.

“They don’t like a more acidic ocean,” Reusch said.

When the researchers returned the algae to “normal” conditions, they went right back to work making their scales.

“They know when to reduce calcification,” Reusch said. “They just switch it off when it’s costly, but they switch it back on when the conditions are normal.”

Phytoplankton are vitally important to the way oceans — and the world — work.

The microscopic algae form the base of the marine food web and are responsible for producing much of the world’s oxygen.

“Every second breath you take comes from their photosynthesis,” Reusch said.

Even though the study found it’s possible to restore phytoplankton’s carbon-cycling ability by returning them to an un-acidified ocean, such a scenario is “not foreseeable,” Reusch said. Even if we reduce atmospheric carbon dioxide now, he said, ocean acidification is likely to continue.

“We have to live with ocean acidification for hundreds of years,” he said.