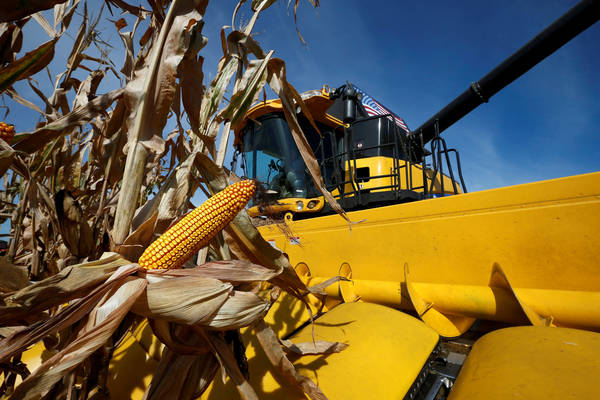 A combine machine harvests corn in a field in Minooka, Ill. in 2014. (REUTERS/Jim Young/File Photo)

After months of infighting between Republicans representing different regional economic interests, the Environmental Protection Agency Thursday finally rendered its ruling on how much renewable fuel is required to be mixed into the nation's transportation fuel supply.

The outcome: No one says they're happy. And as that old adage goes, that might be a sign of a good compromise — at least politically, that is, for President Trump, whose administration is forced to balance the competing desires of farm- and petroleum-state Republicans in its decision.

With Trump's election, the oil and gas sector saw its first opportunity in years to upend the status quo in which the EPA steadily raised targets compelling refiners to add renewable fuels derived from corn, soybeans and other agricultural products to gasoline and diesel sold to consumers.

Even though in 2016 Trump campaigned in Iowa, the buckle of the nation's Corn Belt, and elsewhere on the promise of supporting corn-based ethanol, the selection of Scott Pruitt of Oklahoma ,from the heart of oil and gas country, to run the EPA buoyed the hopes of the fossil-fuel industry they could successfully press for changes to the so-called Renewable Fuel Standard.

But it wasn't to be. Under pressure from Sen. Charles E. Grassley (R-Iowa) and others threatening to block EPA nominees, Pruitt committed in October to making changes biofuel producers felt would undermine the RFS.

In a final rule issued Thursday, Pruitt followed through by keeping the mandate for conventional renewable fuels, like corn-based ethanol, steady at 15 billion gallons for 2018. It was a rare rebuke for the oil and gas sector, which has scored a series of deregulatory wins under Trump.

“The Renewable Fuel Standard is broken and needs comprehensive reform,” Frank Macchiarola, downstream director for the American Petroleum Institute, said after the decision. "Administrator Pruitt, therefore, faces the daunting task of implementing a broken program that was based on incorrect assumptions made over a decade ago."

Chet Thompson, president of another oil and gas trade group, American Fuel and Petrochemical Manufacturers, was even more to the point: "It appears that EPA did exactly what Senator Grassley demanded, bowing the knee to King Corn." The New York Times called the decision a "Score... for Corn." Bloomberg News labeled the decision a "Reward" for Iowa.

But Grassley, at least in his public statement, wasn't celebrating. Simultaneously, the EPA didn't give in to the demands of advanced biofuel producers for raised targets. Shortly after the EPA announcement, the senior Iowa senator said in a statement the "renewable volume obligations fall short of the full potential of the U.S. biofuels industry," singling out "the lack of increase for biodiesel levels and the cut in cellulosic level requirements."

As long-time energy reporter Jennifer A. Dlouhy‏ of Bloomberg News put it:

Why is that? Because the RFS is set annually, and no side wants to appear satisfied with this year's results lest it undermine next year's lobbying efforts.