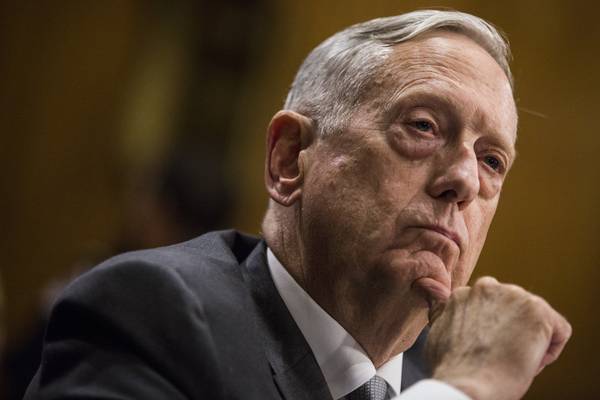 Since taking office, President Trump has failed to make good on some high-profile campaign promises, such as appointing a special prosecutor to investigate Hillary Clinton and banning all Muslims from entering the country (not from lack of trying, however)...

So it may come as a surprise to hear that before the end of the year, Trump is expected to sign a bill saying that “climate change is a direct threat to the national security of the United States.”

That's how one provision of the National Defense Authorization Act reads. For years, the Defense Department quietly studied how to adapt its facilities susceptible to climate change. One 2016 study, for example, found that a 3-foot rise in the sea level could submerge 128 military installations.

In addition to declaring a “sense of Congress” that global warming is a national security threat, the defense reauthorization bill would also require the Defense Department to assess the vulnerabilities of the 10 bases most threatened by climate change in each service.

​​​​​​It was never a sure thing that a bill with such language would ever land on the desk of a president who once said he is “not a big believer in man-made climate change.”

The climate-change provision was inserted by Rhode Island Rep. Jim Langevin, a Democrat on the House Armed Services Committee, and survived an effort in a 185-to-234 vote led by Rep. Scott Perry (R-Pa.) on the House floor to strip it out.

Shortly before the Thanksgiving break, both the Senate and the House passed a $700 billion deal on defense struck by negotiators. The climate provision emerged from that haggling “completely intact,” according to Langevin's office.

“It's a signal that Congress is willing to be practical on the issue,” said Sharon Burke, a senior adviser at the liberal-leaning think tank New America and former assistant secretary of defense for operational energy under President Barack Obama.

In conference, the House also rebuffed a Senate-led effort that could have had the effect of eliminating Senate-confirmed assistant secretary positions in each branch of the military meant to handle energy and environmental work at military facilities.

“These are important jobs,” said John Conger, who as a former principal deputy undersecretary in the Defense Department’s comptroller’s office and in other positions there oversaw the energy and environmental policy at bases. “They have sprawling portfolios,” he said, adding the Pentagon controls about 25 million acres of land.

The climate provision is one small part of a massive reauthorization bill for the U.S. military worldwide, and the White House has not signaled it will veto the legislation.

But the GOP-led Congress has passed several pieces of legislation reversing environmental rules enacted under Obama. And the Environmental Protection Agency and Interior Department under Trump have been even more ambitious in rolling back Obama-era rules.

The Pentagon says it continues to take climate change seriously, even under Trump. "“I agree that the effects of a changing climate — such as increased maritime access to the Arctic, rising sea levels, desertification, among others — impact our security situation,” Defense Secretary Jim Mattis told the Senate in written testimony this year.

By keeping intact the climate language, lawmakers from both parties may be responding to the competing desires of Trump Cabinet officials.

Mattis has said he thinks that climate change poses a real threat to national security, while EPA chief Scott Pruitt has questioned the scientific conclusion of his own agency, as well as that of the broader scientific community, that carbon dioxide emissions are creating that global warming threat.

The Pentagon retains a “pragmatic and apolitical approach to climate change,” Conger said, “and Congress respects that.”

He added the passage of the global warming provision in the NDAA “reflects that the center has moved” leftward in debate on climate change — at least when it comes to addressing the consequences rather than the causes.

“It is a different thing to let someone deal with the effects of climate change,” Conger said, “verses reducing emissions.”