President Trump waves after announcing the United States would withdraw from the Paris climate accord. (AP Photo/Pablo Martinez Monsivais)

Donald Trump spent 131 days contemplating what life would be like if the United States left the Paris climate agreement. Ultimately, he seemed to like what he saw, and followed his gut...

On Thursday, the president made official his long-rumored decision to withdraw the United States from the 195-nation accord.

Speaking outside the White House, Trump fulfilled a campaign promise to remove the United States from the landmark deal aimed at curbing climate-altering emissions and keeping global warming below a threshold — 2 degrees Celsius above the global temperature before humans began burning fossil fuels — at which the worst consequences of climate change are believed by the scientific community to take hold. (The Post's Philip Rucker and Jenna Johnson have the main story here.)

A wide swath of world leaders, top scientists and business titans immediately condemned the decision. But in a Rose Garden speech, Trump said withdrawal was necessary for U.S. economic security.

"I am fighting every day for the great people of this country," he said. "Therefore, in order to fulfill my solemn duty to protect America and its citizens, the United States will withdraw from the Paris climate accord."

But many of the other reasons Trump gave for withdrawing seemed at best strained and at worst unfounded.

Below we break down some of the claims we found especially difficult to understand:

Environmental Protection Agency Administrator Scott Pruitt speaks about the U.S. role in the Paris climate-change accord in the Rose Garden on June 1, 2017. (Photo by Jabin Botsford/The Washington Post)

CLAIM #1: For weeks, as the tug-of-war between the pro- and anti-Paris camps in the White House played out, Trump seemed to grope for a way to claim a middle ground on the Paris decision. The bone he chose to throw Paris supporters is the possibility that the United States can somehow "reenter" the agreement in the future.

In his speech, Trump promised to "begin negotiations to reenter either the Paris accord or really an entirely new transaction on terms that are fair to the United States."

THE PROBLEM: From the start, the Paris agreement was designed to have the plasticity Trump seemed to be seeking by talking about some kind of renegotiation. The breakthrough Obama and others made in the lead-up to Paris was allowing nations to choose the amount of greenhouse-gas emissions they were willing to cut.

"Paris already gives countries tremendous flexibility, and no penalties," said Michael Gerrard, a professor of environmental law at Columbia and director of the Sabin Center for Climate Change Law. "Trump obviously didn't read the Paris agreement, and his statement was written by people who willfully misrepresented its contents — his staff or their lobbyist friends."

Unlike its predecessor, the Kyoto Protocol, the Paris accord did not legally bind nations to emissions targets. The only thing keeping a nation in check was pressure from its international peers. Under the agreement, the United States could miss an emissions goal and face no penalty. It could reset that goal, too, with no formal consequence. It's unclear what other concessions the United States could gain from a renegotiation.

Also, a new Paris deal may not be practical.

Right after Trump announced his decision, three large European nations indicated they have no interest in a do-over. Italy, Germany and France issued a statement barely an hour after Trump's speech, saying that the Paris accord "cannot be renegotiated since it is a vital instrument for our planet, societies and economies," according to Reuters.

Environmental Protection Agency head Scott Pruitt — who lobbied heavily for leaving the deal — argued on CNN after the Rose Garden announcement that Paris was a "failing agreement to begin with." He added that Trump has repeatedly said he is "committed to continuing" climate-change discussions, but with "America at the forefront of those discussions." 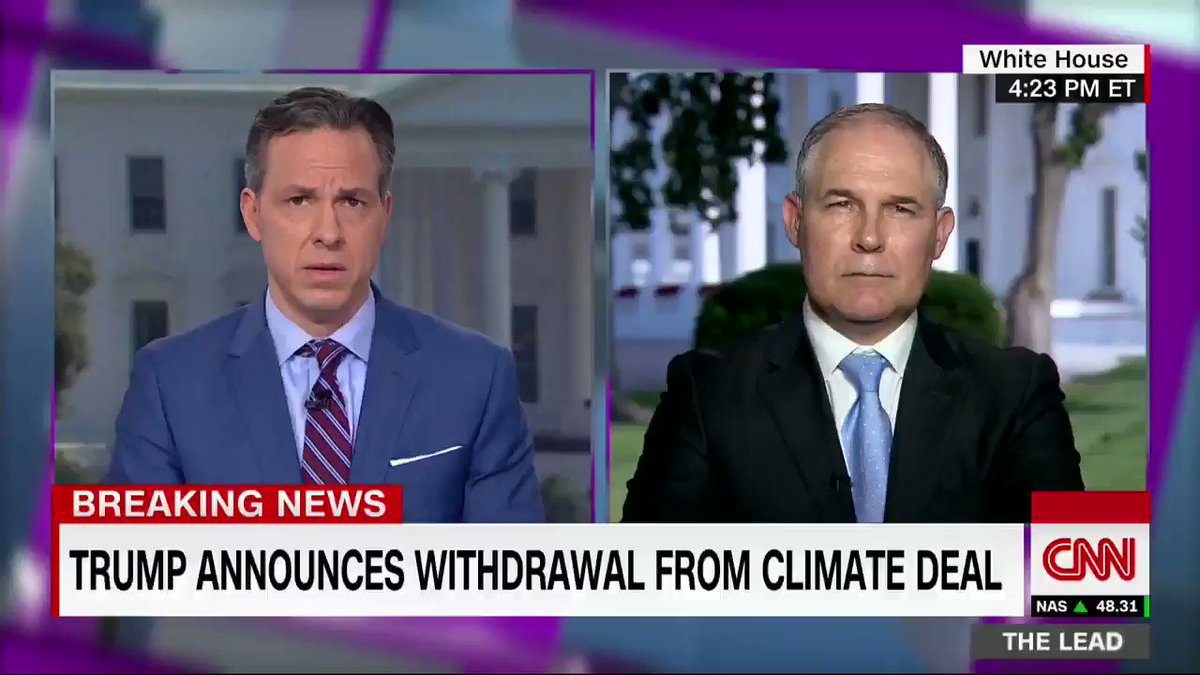 CLAIM #2: While Trump as president has taken a decidedly softer stance toward China than he did while running for office, he used the Paris announcement to take a swing at one of his favorite punching bags to illustrate the raw deal he believes the United States got under the agreement.

"China will be allowed to build hundreds of additional coal plants," Trump proclaimed. "So, we can't build the plants, but they can, according to this agreement."

And again, Trump said: "Under the agreement, China will be able to increase these emissions by a staggering number of years, 13. They can do whatever they want for 13 years. Not us."

THE PROBLEM: Not so. Again, the agreement does not bind any nation to any emissions target. What China did choose to do under the agreement is have its carbon emissions "peak" by 2030 before then declining. The world accepted that longer leash for China and other developing nations to let them use fossil-fuel energy to promote greater economic growth.

But to meet that goal, China cannot "do whatever they want" until then, as Trump said, at least if China wants to meet that voluntary 2030 target. It needs to begin acting now to control emissions — and in fact, is signaling to the world it is already doing so by announcing in January the cancellation of plans to build more than 100 coal-fired power plants.

The Paris deal "is more fair to the U.S. than previous agreements because it includes all the major economies of the world, not just the rich countries, so both developed countries and developing countries have skin in the game," Jody Freeman, a Harvard Law School professor and director of the school's Environmental Law and Policy Program, said. Trump's "portrayal is at odds with reality," she added.

CLAIM #3: In a baby step for a politician who once dubbed the idea of climate change a hoax, Trump suggested in his speech that human activity can warm the planet — albeit backhandedly, and to make the point that the climate accord is futile. Here's what Trump tweeted in 2013:

Ice storm rolls from Texas to Tennessee - I'm in Los Angeles and it's freezing. Global warming is a total, and very expensive, hoax!

"Even if the Paris Agreement were implemented in full, with total compliance from all nations, it is estimated it would only produce a two-tenths of one degree — think of that, this much — Celsius reduction in global temperature by the year 2100," Trump said during the speech, holding up his hand with thumb and index finger only millimeters apart.

THE PROBLEM: While it's true that current commitments are not enough to meet the two-degree goal, Trump's figures are off. As my Post colleague Chris Mooney writes, reporting on an analysis from an MIT researcher: "The current country level pledges under the Paris agreement would reduce the planet’s warming by the year 2100 down from 4.2 degrees Celsius (7.6 degrees Fahrenheit) to 3.3 degrees Celsius (5.9 degrees Fahrenheit), or nearly a full degree Celsius." CLAIM #4: Trump also singled out for criticism a United Nations initiative that actually predates the Paris deal called the Green Climate Fund. It's a pool of money that finances climate mitigation and adaptation efforts in poor nations, but Trump is concerned that U.S. contributions are hurting the United States.

"Beyond the severe energy restrictions inflicted by the Paris accord," Trump said, "it includes yet another scheme to redistribute wealth out of the United States through the so-called Green Climate Fund — nice name — which calls for developed countries to send $100 billion to developing countries all on top of America's existing and massive foreign aid payments."

And that money the United States pays is "raided out of America's budget for the war against terrorism," he said. "That's where they came."

THE PROBLEM: There are a few, according to the nonprofit Friends of the Earth.

The Green Climate Fund contains $10.3 billion not $100 billion. And the U.S. share comes from the Treasury, not any pool or money set aside for anti-terrorism purposes.

"I’d never heard anything like this before," Karen Orenstein, deputy director of economic policy at Friends of the Earth, said of the terrorism claim. "It’s totally ridiculous."

CLAIM #5: During his Rose Garden speech, Trump attempted to rev his coal-country base by saying: "I was elected to represent the citizens of Pittsburgh, not Paris."

THE PROBLEM: This line is confusing. It was delegates of the nearly 200 nations of the world, not the approximately 2 million people of Paris, who negotiated the climate accord. Paris was simply the city that hosted the talks after which, in the long tradition of diplomatic nomenclature, the agreement was named. Nonetheless, the line is likely to resonate with Trump voters who feel they have been left out of the economic recovery and who do not relate to international diplomats who they don't believe are working in their best interest.

One other note: Hillary Clinton actually won Allegheny County, Pa.,  where Pittsburgh is located, by 16 points. Or, as the mayor of Pittsburgh, Democrat Bill Peduto, tweeted:

Fact: Hillary Clinton received 80% of the vote in Pittsburgh. Pittsburgh stands with the world & will follow Paris Agreement @HillaryClinton https://twitter.com/theinclinepgh/status/870368024926224384 …

For more fact-checking, read my Post colleagues Glenn Kessler and Michelle Ye Hee Lee and Chris Mooney. And here is an annotated transcript of Trump's speech.