THE HISTORY OF THE DOOMSDAY CLOCK AS IT MOVES CLOSER TO ‘MIDNIGHT’... Lawrence Krauss, theoretical physicist, chair of the Bulletin of the Atomic Scientists Board of Sponsors, left, and Thomas Pickering, co-chair of the International Crisis Group, display the Doomsday Clock in Washington, Thursday, Jan. 26, 2017. (AP Photo/Carolyn Kaster)

The December 1991 issue of the Bulletin of the Atomic Scientists, the journal behind the famed Doomsday Clock, was brimming with optimism. The Cold War had officially ended, and that fall the United States and the Soviet Union had struck a landmark agreement to slash their nuclear arsenals. After more than three decades, thousands of tactical weapons would be dismantled or withdrawn from alert...

In response, the Bulletin’s board of directors made what they felt was an extraordinary decision. The Doomsday Clock, which was created to symbolize humanity’s proximity to global disaster, would be wound back to 17 minutes before “midnight.” Never in the 44 years since the clock was first set had the world been so far from catastrophe, the Bulletin said.

“The clock is in a new region because we feel the world has entered a new era,” the Bulletin editorialized in the issue. “The illusion that tens of thousands of nuclear weapons are a guarantor of national security has been stripped away.”

It was a hopeful turn at the end of a dark era in geopolitics. But it didn’t last. Over the years, the Doomsday Clock’s minute hand has crept back toward midnight from its most distant mark of 11:43 p.m., as the scientists and policy experts behind it have grown increasingly concerned about setbacks on nuclear disarmament and a lack of action to combat global climate change.

More than a quarter-century after its brightest moment, the Doomsday Clock is again approaching the final hour.

On Thursday, as The Washington Post reported, the Bulletin moved the clock 30 seconds forward to two and a half minutes before midnight, the closest it has been to Doomsday since 1953, after the United States and the Soviet Union tested their first hydrogen bombs.

The Bulletin’s board said its decision was prompted by the international community’s failure “to come effectively to grips with humanity’s most pressing existential threats, nuclear weapons and climate change.” It also specifically mentioned the rise of nationalist movements and “disturbing comments” about nuclear proliferation from President Donald Trump.

Last month, Trump tweeted that the United States must “strengthen and expand” its nuclear weapons and reportedly called for an “arms race” in a discussion with an MSNBC host. He later appeared to backpedal on those statements, with the Times of London quoting him as saying that nuclear weapons “should be way down and reduced very substantially.”

The Bulletin said Trump’s “casual talk” about nuclear weapons — as well as his disbelief in climate science — were key factors behind the decision to move the clock forward.

“The probability of global catastrophe is very high,” the Bulletin warned, as it has in previous updates, “and the actions needed to reduce the risks of disaster must be taken very soon.”

The Doomsday Clock was created in 1947 by the researchers behind the Bulletin of the Atomic Scientists, some of whom had participated in the Manhattan Project, which developed the atomic bomb. A marriage of art and science, it was initially designed as analogy for the threat of nuclear war, and later broadened to include climate change and other issues. Some critics have questioned its usefulness. In an essay for the Conversation in 2015, the last time the clock was moved, University of Oxford researcher Andres Sandberg cautioned against using the Doomsday Clock as a predictor of actual events, saying it instead gauged the “strong feeling of urgency” among the people who run it. Others have argued the Doomsday Clock shouldn’t be taken seriously at all.

The clock’s time is set by the Bulletin’s Science and Security Board and Board of Sponsors, made up of scientists and academics from around the world, among them more than a dozen Nobel laureates. Originally set at 7 minutes to midnight, the time has fluctuated over the years to reflect treaties, weapons tests, global conflicts and political developments.

The outlook was never sunnier than it was in December 1991.

In the fall of that year, President George H.W. Bush had taken U.S. bombers off their round-the-clock alert and ordered thousands of nuclear warheads deactivated or destroyed under the Strategic Arms Reduction Treaty. Soviet President Mikhail Gorbachev responded in kind.

Two years earlier, when the fall of the Berlin Wall brought the end of the Cold War, the Bulletin had moved the Doomsday Clock to 10 minutes before midnight. Now, the group decided, the hands should be wound back another seven minutes, bringing it farther back than ever before.

The decision didn’t come easy. According to the Bulletin’s December 1991 issue, the Bulletin’s founders had only envisioned a 15-minute range on the symbolic clock, saying it was “all anyone thought would be needed in their lifetimes.” Board members and sponsors of the journal tussled over the significance of the new treaty, and the journal noted that global nuclear stockpiles were still 50,000 strong. But on balance, the group said, “the world was changing in fundamental and positive ways.” 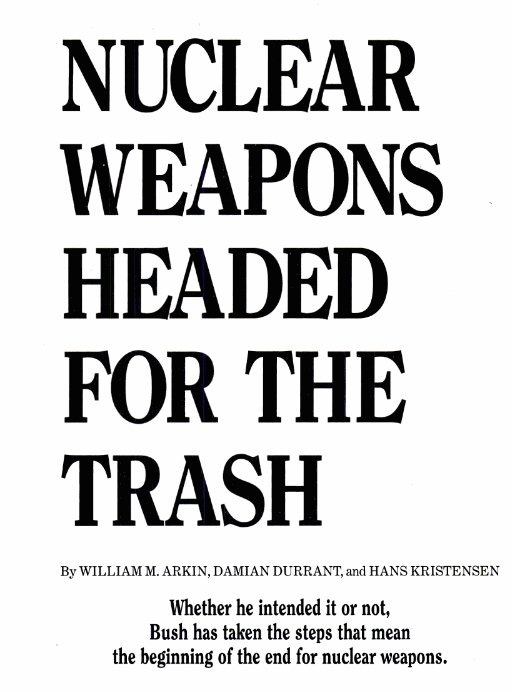 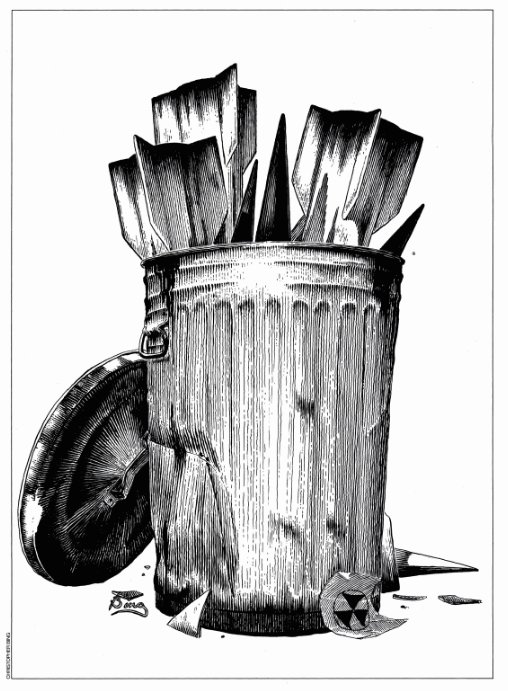 Illustration and headline from the December 1991 edition of the Bulletin of the Atomic Scientists. Times were different. @BulletinAtomic

An essay in that month’s journal went on to praise President Bush’s remarks about disarmament that fall as the “beginning of the end of nuclear weapons,” saying the steps he and Gorbachev had taken would close the books on the nuclear age. An editorial illustration depicted the fins of several missiles protruding from a trash can, with the headline “Nuclear Weapons Headed for the Trash.”

Another article compared Bush and Gorbachev to “two playground toughs” who had “suddenly shifted their rivalry to winning top grades in the classroom.” Disarmament, the author said, had led to a “peace bonanza” for politicians looking to spend money on things other than weapons.

Mike Moore, the Bulletin’s editor, admitted that it was all “pretty optimistic.” But it wasn’t without good reason, he said.

“There are times,” Moore wrote, “in which one ought to be forgiven for thinking now and then that a world free of nuclear weapons has become a possibility — however remote — and not just a woolly daydream.”

January 27 at 5:21 AM
source: https://www.washingtonpost.com/
original story HERE
New Climageddon book: Click here for Information on the new Climageddon book about the global warming emergency and what you can do.
Share Blog Post: If you would like to share this blog post on Facebook or in other ways go back to the original short version of this blog posting and look to lower right for the large green Share button.
Get Global Warming Blog RSS Feed: Sign up for free Global Warming Blog RSS feed by clicking here.
Sign Petition: Sign petition to declare an international global warming State of Emergency, click  here!
To see our: most current positions, opinions, comments, agreement or disagreement with this article, and/or possible criticisms related to the subjects or facts in the above article, click here.