THE 'IMMINENT MINI ICE AGE' MYTH IS BACK, AND IT'S STILL WRONG... 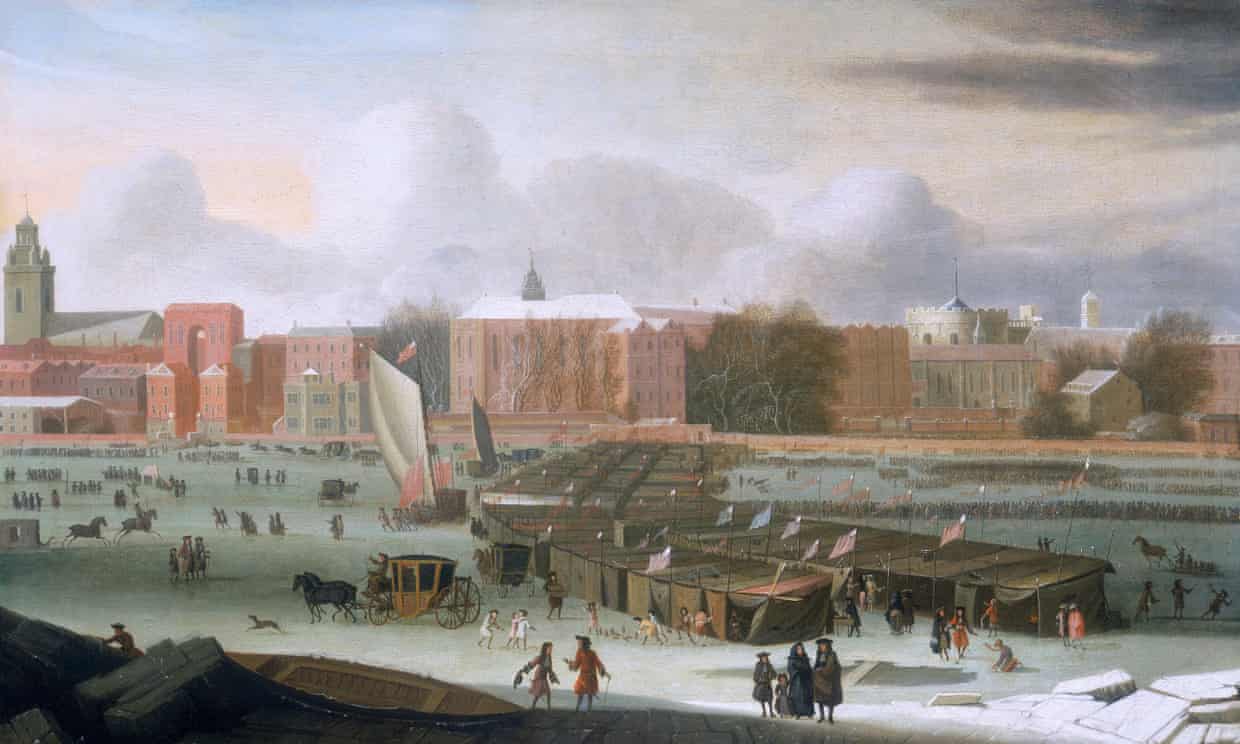 ‘A Frost Fair on the Thames at Temple Stairs’, c1684. These fairs held on the frozen River Thames in the UK are often referenced by those peddling the ‘impending mini ice age’ myth. Photograph: Heritage Images/Getty Images

We can’t accurately predict solar activity, and a quiet solar cycle would have a small impact on Earth’s climate anyway...

Roughly every two years we’re treated to headlines repeating the myth that Earth is headed for an imminent “mini ice age.” It happened in 2013, 2015, and again just recently at the tail end of 2017.

This time around, the myth appears to have been sparked by a Sky News interview with Northumbria University mathematics professor Valentina Zharkova. The story was quickly echoed by the Daily Mail, International Business Times, Sputnik News, Metro, Tru News, and others. Zharkova was also behind the ‘mini ice age’ stories in 2015, based on her research predicting that the sun will soon enter a quiet phase.

The most important takeaway point is that the scientific research is clear – were one to occur, a grand solar minimum would temporarily reduce global temperatures by less than 0.3°C, while humans are already causing 0.2°C warming per decade. 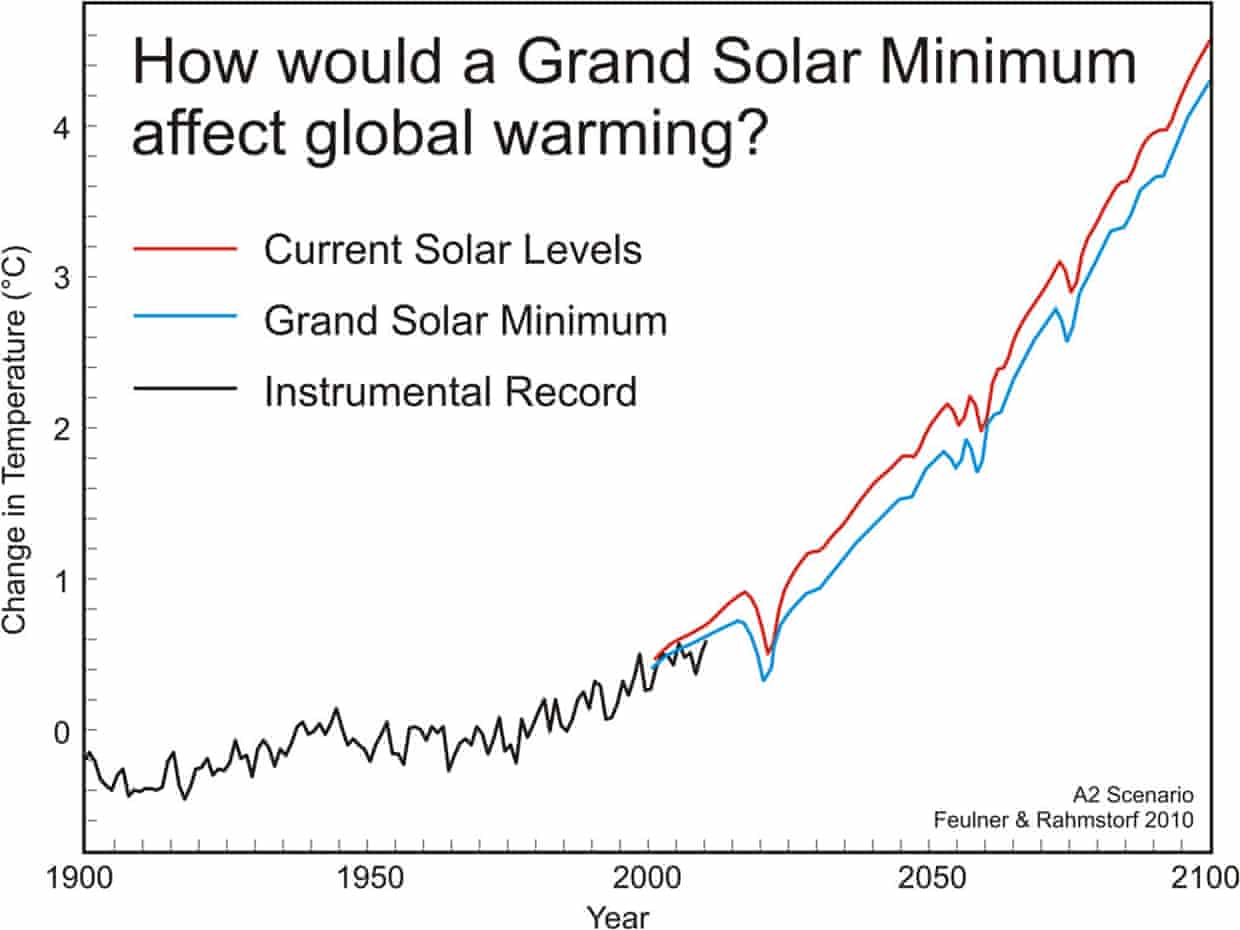 So the sun could only offset at most 15 years’ worth of human-caused global warming, and once its quiet phase ended, the sun would then help accelerate global warming once again.

The myth ultimately stems from a period climate scientists have coined “The Little Ice Age” (LIA). This was a modestly cool period running from about the year 1300 to 1850. It was particularly cold in the UK, where the River Thames sometimes froze over, and ‘frost fairs’ were held.

A team led by University of Reading physicist and solar expert Mike Lockwood wrote a paper reviewing the science behind frost fairs, sunspots, and the LIA. It included the figure below showing northern hemisphere temperatures along with sunspot number and the level of volcanic particles in the atmosphere over the past millennium: 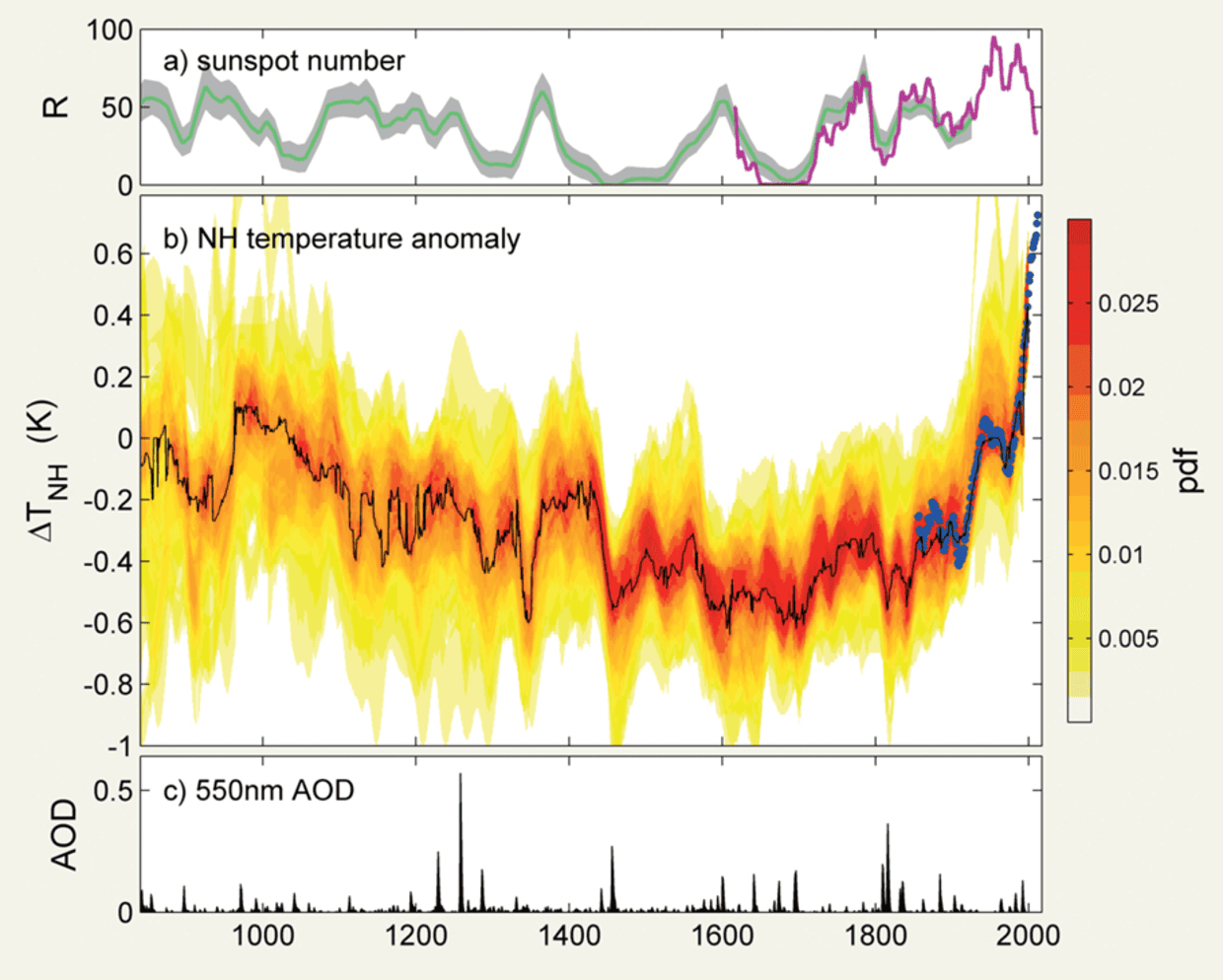 During full blown ice ages, temperatures have generally been 4–8°C colder than in modern times. As this figure shows, during the LIA, temperatures were at most only about 0.5°C cooler than the early 20th century. Thus, Lockwood calls the Little Ice Age “a total misnomer.” As the authors put it:

Compared to the changes in the proper ice ages, the so-called Little Ice Age (LIA) is a very short-lived and puny climate and social perturbation.

For comparison, temperatures have risen by a full 1°C over the past 120 years, and 0.7°C over just the past 40 years.

The minimal solar minima influence on the climate

The Maunder Minimum was a period of quiet solar activity between about 1645 and 1715. It’s often referred to interchangeably with ‘Little Ice Age,’ but the latter lasted centuries longer. In fact, three separate solar minima occurred during the LIA, which also included periods of relatively higher solar activity. Other factors like volcanic eruptions and human activities also contributed to the cool temperatures. In fact, a 2017 paper led by the University of Reading’s Mathew Owens concluded:

Climate model simulations suggest multiple factors, particularly volcanic activity, were crucial for causing the cooler temperatures in the northern hemisphere during the LIA. A reduction in total solar irradiance likely contributed to the LIA at a level comparable to changing land use [by humans]. 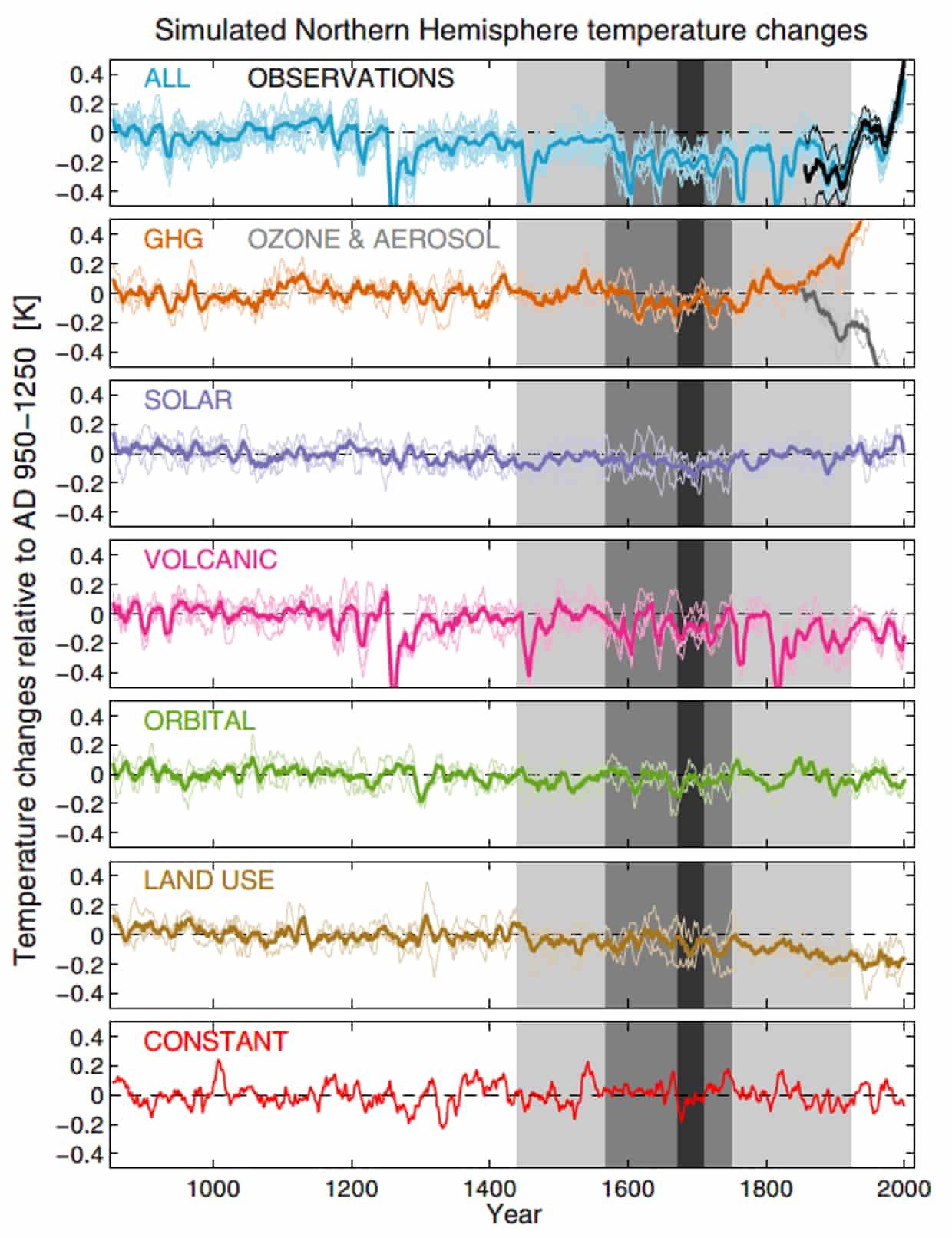 Simulated northern hemisphere temperature changes resulting from individual climate factors, as compared to the observed changes in the top panel. The bottom panel shows a simulation with no changes to climatological factors, to illustrate the level of natural variability in the climate. Illustration: Owens et al. (2017), Journal of Space Weather and Space Climate

Several studies have investigated the potential climate impact of a future grand solar minimum. In every case, they have concluded that such a quiet solar period would cause less than 0.3°C cooling, which as previously noted, would temporarily offset no more than a decade and a half’s worth of human-caused global warming. These model-based estimates are consistent with the amount of cooling that occurred during the solar minima in the LIA.

Is another grand solar minimum imminent?

Although it would have a relatively small impact on the climate, it’s still an interesting question to ask whether we’re headed for another quiet solar period. Zharkova thinks so. Her team created a model that tries to predict solar activity, and suggests another solar minimum will occur from 2020 to 2055. However, other solar scientists have criticized the model as being too simple, created based on just 35 years of data, and failing to accurately reproduce past solar activity.

Ilya Usoskin, head of the Oulu Cosmic Ray Station and Vice-Director of the ReSoLVE Center of Excellence in Research, published a critique of Zharkova’s solar model making those points. Most importantly, the model fails in reproducing past known solar activity because Zharkova’s team treats the sun as a simple, predictable system like a pendulum. In reality, the sun has more random and unpredictable (in scientific terms, “stochastic”) behavior:

Just imagine a very turbulent flow of water in a river rapid, and you throw a small wooden stick into water and trace it. Then you do it second time and third time ... each time the stick will end up in very different positions after the same time period. Its movement is unpredictable because of the turbulent stochastic component. This is exactly the situation with solar activity.

Lockwood agrees that we don’t yet have a proven predictive theory of solar behavior. He has published research examining the range of possible solar evolutions based on past periods when the Sun was in a similar state to today, but as he puts it, “that is the best that I think we can do at the present time!”

Solar physicist Paul Charbonneau at the University of Montreal also concurred with Usoskin. He told me that while scientists are working to simulate solar activity, including using simplified models like Zharkova’s,

on the standards of contemporary dynamo models theirs is extremely simple —in fact borderlining simplistic ... To extrapolate such a model outside its calibration window, you need an extra, very strong hypothesis: that the physical systems underlying the magnetic field generation retain their coherence (Phase, amplitude, etc.). As my colleague Ilya Usoskin has already explained, this is very unlikely to be the case in the case of the solar activity cycle.

Why won’t this myth die?

Zharkova believes her solar model is correct, but at best it can only try to predict when the next quiet solar period will occur. Its influence on Earth’s climate is outside her expertise, and the peer-reviewed research is clear that it would be a minimal impact.

Zharkova disagrees – I contacted her, and she told me that she believes a grand solar minimum would have a much bigger cooling effect. However, she also referenced long-debunked myths about global warming on Mars and Jupiter, and made a comment about “the preachers of global warming.” She’s clearly passionate about her research, and has the credibility that comes with publishing peer-reviewed studies on solar activity. Perhaps these factors motivate journalists to write these frequent ‘mini ice age’ stories.

But Zharkova’s climate science beliefs are irrelevant. While she has created a model predicting an imminent period of quiet solar activity, other scientists have identified serious flaws in the model, and in any case, research has shown that another solar minimum would only have a small and temporary impact on Earth’s climate.