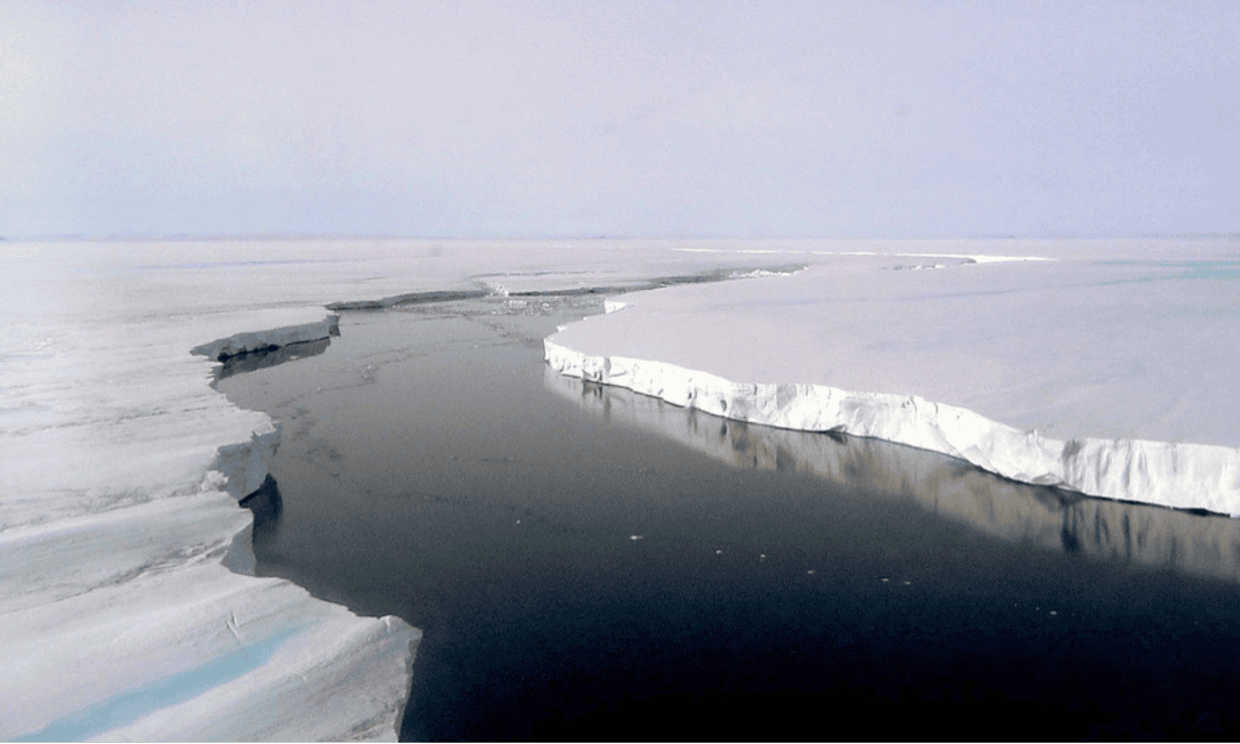 Very soon, a large portion of an ice shelf in Antarctica will break off and collapse into the ocean. The name of the ice shelf is Larsen C; it is a major extension from of the West Antarctic ice sheet, and its health has implications for other ice in the region, and sea levels globally.

How do we know a portion is going to collapse? Well, scientists have been watching a major rift (crack) that has grown in the past few years, carving out a section of floating ice nearly the size of Delaware. The speed of the crack has increased dramatically in the past few months, and it is nearly cracked through. 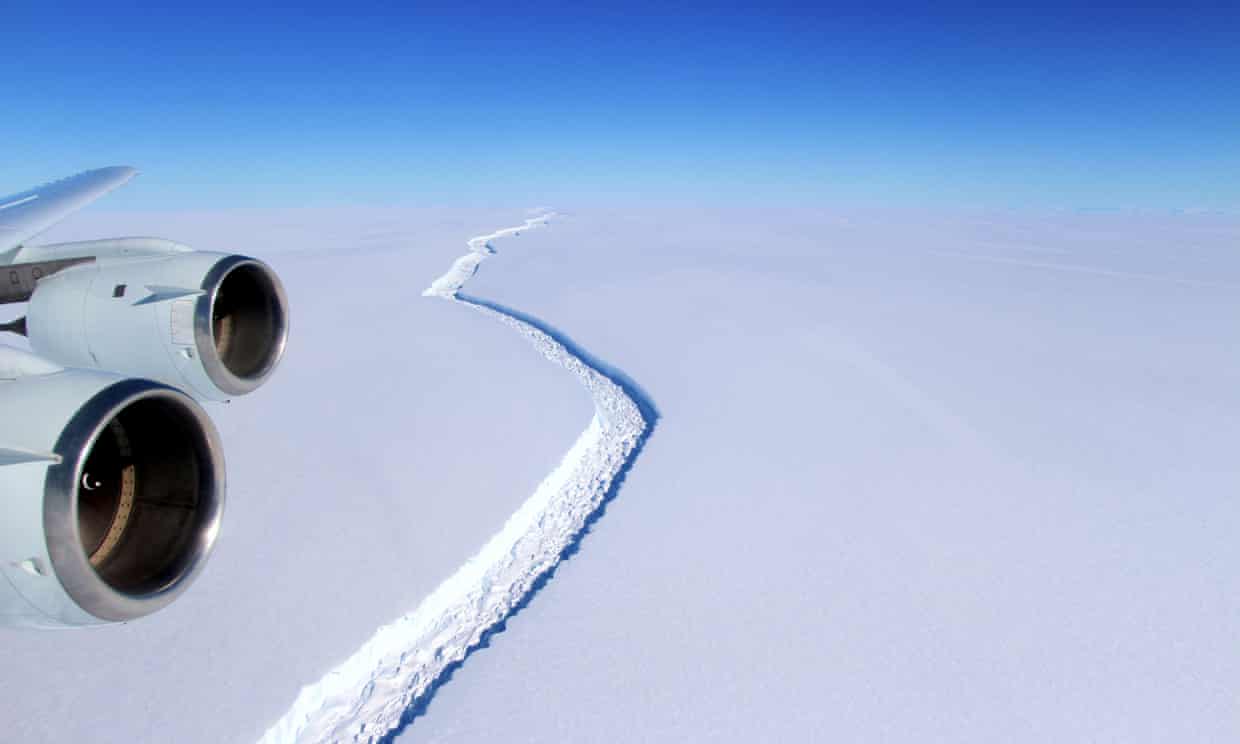 NASA handout photo dated 10/11/16 showing a rift in the Larsen C Ice Shelf in Antarctica, as scientists have said that an iceberg a quarter the size of Wales is poised to break off from it. Photograph: NASA/John Sonntag/PA

Project Midas provides frequent updates on the Larsen C shelf. You can read a summary there, which reports:

In the largest jump since January, the rift in the Larsen C Ice Shelf has grown an additional 17 km (11 miles) between May 25 and May 31 2017. This has moved the rift tip to within 13 km (8 miles) of breaking all the way through to the ice front, producing one of the largest ever recorded icebergs. The rift tip appears also to have turned significantly towards the ice front, indicating that the time of calving is probably very close.

The rift has now fully breached the zone of soft ‘suture’ ice originating at the Cole Peninsula and there appears to be very little to prevent the iceberg from breaking away completely.

When it calves, the Larsen C Ice Shelf will lose more than 10% of its area to leave the ice front at its most retreated position ever recorded; this event will fundamentally change the landscape of the Antarctic Peninsula. We have previously shown that the new configuration will be less stable than it was prior to the rift, and that Larsen C may eventually follow the example of its neighbor Larsen B, which disintegrated in 2002 following a similar rift-induced calving event.

Dr. Stefan Rahmstorf provided me an excellent image from his book Our Threatened Oceans. This image shows prior breakup of regions A and B (along with the location and size of part C). 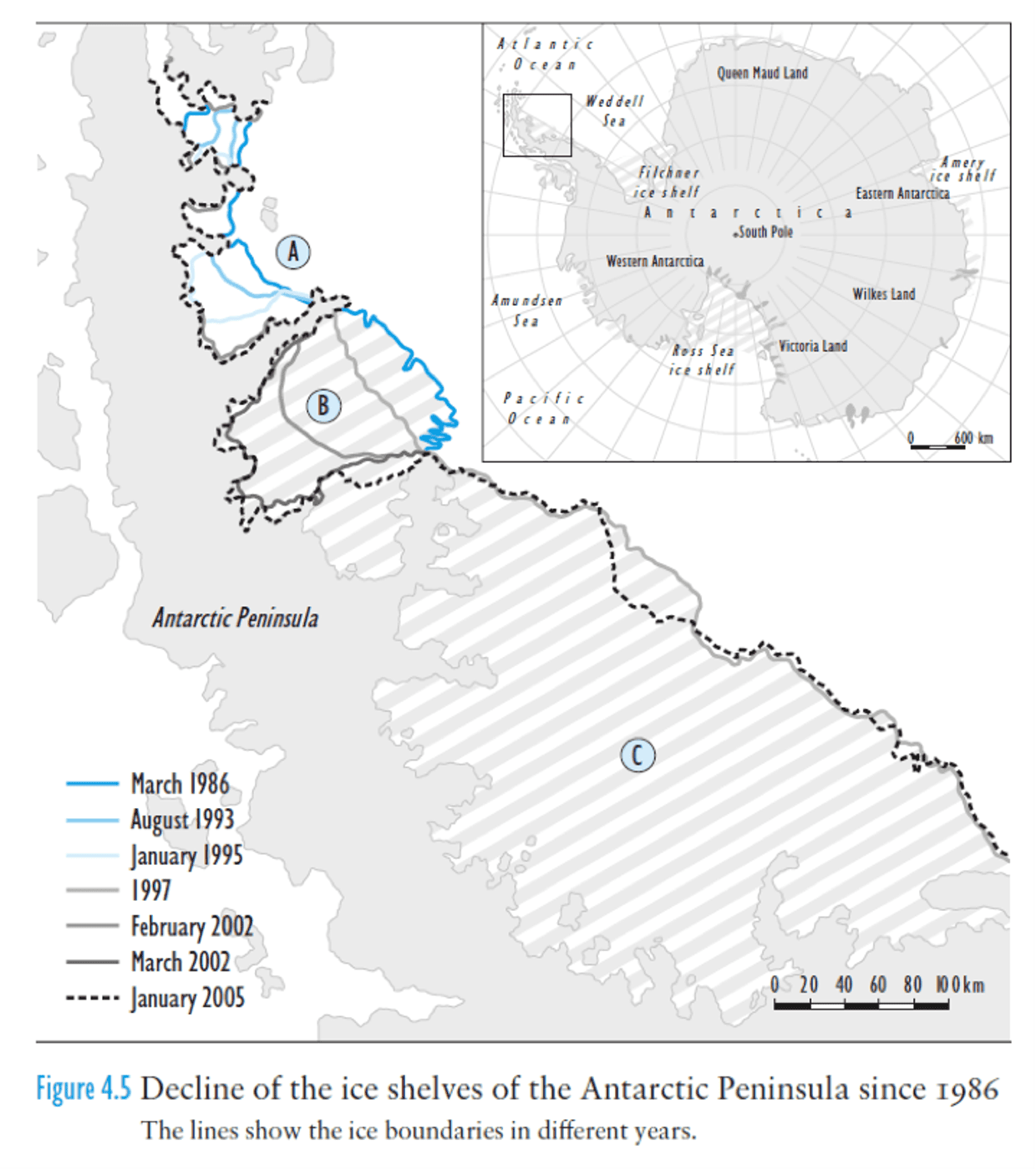 Why does all this matter? Well it is important for a number of reasons. First, when an ice shelf melts or collapses, it can unpin other ice that is sitting on land, which allows it to flow more quickly into the ocean. It is this secondary effect – the loss of ice resting on land – that changes the rate of sea level rise. Loss of a major ice shelf can also activate ice that rests on bedrock topography that makes it fundamentally unstable – ice that, once moving, will move faster and faster, until a large region is afloat.

The entire Larsen Ice shelf, which is the fourth largest in Antarctica, covers nearly 50,000 square km (20,000 square miles) according to reporting at ABC science. The ice on the land upstream of the shelf is enough to raise sea level, eventually, by ten centimeters. This is not, by itself, a major threat to the world’s coastlines, but it reveals the path that other, even larger areas are likely to take in the future.

Perhaps a quotation from a seminal work on Antarctic ice sheets best sums up the situation. In a 1978 paper, John Mercer from the Institute of Polar studies concluded:

One of the warning signs that a dangerous warming trend is under way in Antarctica will be the breakup of ice shelves on both coasts of the Antarctic Peninsula, starting with the northernmost and extending gradually southward. These ice shelves should be regularly monitored by LANDSAT imagery.

Why is the ice shelf going to break off and collapse into the ocean? Since large calving events are so rare, and since our measurements in and around ice shelves don’t go back in time far enough, it’s hard to say whether this is a natural progression, variability, or a result of human activity (or more likely a mixture). A major reason may be human-caused warming, which has led to melting from both above and below in nearby areas. The Western Antarctic (the parts south of the U.S.) is warming quite quickly, faster than most of the planet. In addition, warmer waters can reach underneath the ice shelf and can melt it from below.

That being said, there are vigorous discussions within the scientific community about how much, if any of this can be attributed to humans. Some scientists think there is strong connection; others are much less sure and see little or no evidence that humans are the cause. From my vantage point, part of this relates to our limited ability to measure what’s going on, and part of this is a common sticking point of whether an absence of evidence is evidence of an absence.

I’ve heard from multiple differing views on this very topic while preparing this post. From my research and experience in climate science as well as in many other areas of research where risk analysis and evidence are weighed, we should assume that human-caused warming is having an effect. In fact, is has to be having some effect. We can measure the incredible amount of heat that is being stored in the oceans as well as the increase in temperatures that have occurred over the Western Antarctica and changes to the ocean currents in the region – there must be some implications to the health of the ice. The real question, in my mind, is how much of the effect is humans? That is something a lot more research will be required for answering.

What we are really concerned about isn’t just this breaking event that will occur quite soon. We are more concerned about the rest of the Larsen C ice shelf. Will it disintegrate now that the protective shelf is gone? If it does disintegrate, will the ice up-land follow suit, and flow into the oceans thereby further increasing sea levels?

When people ask, how much will sea levels rise by 2100, my answer is “1 meter.” Why do experts think this when we’ve only had a fifth of that over the past 100 years? Sea level rise is accelerating – it’s getting faster and faster as the accumulated heat from greenhouse gases takes hold. Part of the reason for the acceleration is phenomena like ice shelf loss. It may take a while for an ice shelf to melt but when it does, the losses occur quickly.

Just a week or so after President Trump withdrew from the world’s best hope of avoiding the worst consequences of climate change, the consequences keep stacking up. One of the unstoppable consequences of melting ice and rising seas is the inundation of coastal communities. In the USA, Miami is our bellwether city. It is a large city, is built on the coast, and it will be devastated by rising seas. You cannot build a sea wall around Miami – the porous substrate means that water will just soak up from below. As Miami deals with a devastating 1 meter of sea level rise by 2100, they can thank their Senator Marco Rubio along with Donald Trump.

Marco Rubio has long argued against taking action on climate change and he has even supported anti-environmental decisions made by Trump. Now, because of rising sea levels, even very high tides are causing flooding in Miami. I cannot imagine what another 1 meter of sea level will do. But, certainly there will be a lot of money spent and resources lost dealing with this problem that could have been avoided.